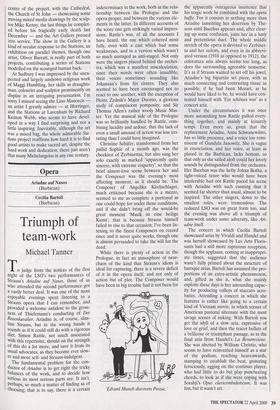 To judge from the notices of the first night of the LSO's two performances of Strauss's Ariadne auf Naxos, those of us who attended the second performance got a vastly better deal. It was one of the most enjoyable evenings spent listening to a Strauss opera that I can remember, and provided a welcome antidote to the gross- ness of Thielemann's conducting of Der Rosenkavalier. Ariadne is, of course, slim- line Strauss, but in the wrong hands it sounds as if it could still do with a rigorous diet. Simon Rattle, not much associated with this repertoire, should on the strength of this do a lot more, and save it from its usual advocates, as they become ever slow- er and more self- and Strauss-indulgent.

The fundamental problem for the con- ductor of Ariadne is to get right the tricky balances of the work, and to decide how serious its most serious parts are. It isn't, perhaps, so much a matter of finding as of Choosing; that is to say, there is a certain indeterminacy in the work, both in the rela- tionship between the Prologue and the opera proper, and between the various ele- ments in the latter. In different accounts of the score one gets strikingly varied impres- sions. Rattle's was, of all the accounts I have heard, the one which cohered most fully, even with a cast which had some weaknesses, and in a version which wasn't so much unstaged as anti-staged. Not only were the singers placed behind the orches- tra, which was a manifest miscalculation, since their words were often inaudible, their voices sometimes sounding like Jokanaan's from his cistern. They also seemed to have been encouraged not to react to one another, with the exception of Heinz Zednik's Major Duomo, a glorious study of complacent pomposity, and Sir Thomas Allen's rather woofy Music Mas- ter. Yet the musical side of the Prologue was so brilliantly handled by Rattle, com- bining lucidity and ardour, that the lack of even a small amount of action was less irri- tating than I could have imagined. Christine Schafer, transformed from her pallid Sophie of a month ago, was the cheekiest of Zerbinettas, but also sang her solo exactly as marked 'apparently quite sincere, with extreme coquetry', so that the brief almost-love scene between her and the Composer was the evening's most affecting moment, as it should be. The Composer of Angelika Kirchschlager, much criticised because she is a mezzo, seemed to me as complete a portrayal as one could hope for under those conditions, and if she didn't bring off the would-be great moment 'Musik ist eine heilige Kunst', that is because Strauss himself failed to rise to that occasion; I've been lis- tening to the finest Composers on record since and it never quite works, though one is almost persuaded to take the will for the deed.

While there is plenty of action in the Prologue, in fact an atmosphere of near- chaos of the kind that Strauss's idiom is ideal for capturing, there is a severe deficit of it in the opera itself, and not only of action but of plot. The Composer would have been in big trouble had it not been for Edvard Munch discovers Prozac.' the apparently outrageous insistence that his tragic work be combined with the opera buffa. For it consists in nothing more than Ariadne lamenting her desertion by The- seus until Bacchus appears and, after clear- ing up some confusion, joins her in a lusty and pretentious duet. The whole middle stretch of the opera is devoted to Zerbinet- ta and her suitors, and even in its abbrevi- ated version (1916 as opposed to 1912), the coloratura aria always seems too long, as does the surrounding agreeable nonsense. It's as if Strauss wanted to set off his jewel, Ariadne's big bipartite set piece, with as much connecting and contrasting tissue as possible; if he had been Mozart, as he would have liked to be, he would have con- tented himself with 'EM schones war' as a concert aria.

Under the circumstances it was once more astonishing how Rattle pulled every- thing together, and mainly at leisurely tempi. Even more so, given that the replacement Ariadne, Anne Schwanewilms, has so little presence, and a voice too remi- niscent of Gundula Janowitz. She is vague in enunciation, and her voice, at least as placed in the Barbican, lacks bottom, so that only as she sailed aloft could her lovely sounds be distinguished from the orchestra. Her Bacchus was the hefty Johan Botha, a tight-voiced tenor who would have been intolerable had not Rattle paced his scene with Ariadne with such cunning that it seemed far shorter than usual, almost to be inspired. The other singers, down to the smallest roles, were tremendous. The reduced LSO was on great form too, and the evening was above all a triumph of team-work under some adversity, like Ari- adne itself.

The concert in which Cecilia Bartoli showcased arias by Vivaldi and Handel and was herself showcased by Les Arts Floris- sants had a still more rapturous reception, though the applause, coming at inappropri- ate times, suggested that the audience wasn't fully primed about the structure of baroque arias. Bartoli has assumed the pro- portions of an extra-artistic phenomenon, and, gifted as she is, what she mainly exploits these days is her astounding capac- ity for producing volleys of staccato acro- batics. Attending a concert in which she features is rather like going to a certain kind of Vietnam movie, in which scenes of American pastoral alternate with the most savage scenes of nuking. With Bartoli you get the idyll of a slow aria, expressive of love or grief, and then the tracer bullets of a bellicose or triumphant passage, as in the final aria from Handel's La Resurrezione. She was abetted by William Christie, who seems to have reinvented himself as a star of the podium, reaching heavenwards, stamping to establish the beat, gesturing ferociously, egging on the continuo player, who had little to do but play punctuating chords, to look as if she were coping with Sorabji's Opus clavicembalisticum. It was fun, but it wasn't art.