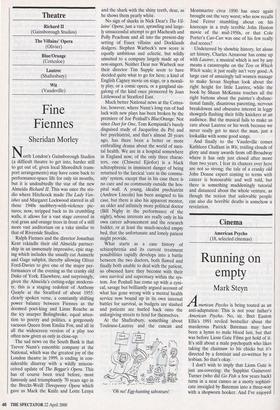 North London's Gainsborough Studios (a difficult theatre to get into, harder still to get out of, given local Shoreditch trans- port arrangements) may have come back to performance-space life for only six months, but it is undoubtedly the star of the new Almeida Richard II. This was once the stu- dio where Hitchcock made The Lady Van- ishes and Margaret Lockwood starred in all those 1940s snobbery-with-violence pic- tures; now, stripped back to its crumbling walls, it allows for a vast stage covered in real grass and orange trees in front of a still more vast auditorium on a rake similar to that of Riverside Studios.

Ralph Fiennes and the director Jonathan Kent rekindle their old Almeida partner- ship in an immensely impressive, epic stag- ing which includes the usually cut Aumerle and Gage subplot, thereby allowing Oliver Ford-Davies to give one of the major per- formances of the evening as the cranky old Duke of York. Elsewhere, and surprisingly, given the Almeida's cutting-edge moderni- ty, this is a staging redolent of Anthony Quayle at the Stratford of about 1955: clearly spoken verse, a constantly shifting power balance between Fiennes as the doomed poet-king and Linus Roache as the icy usurper Bolingbroke, equal atten- tion to poetry and politics, a gorgeously vacuous Queen from Emilia Fox, and all in all the widescreen version of a play too often now given us only in close-up.

The sad news on the South Bank is that Trevor Nunn's ensemble company at the National, which was the greatest joy of the London theatre in 1999, is ending in con- siderable disarray with a wildly miscon- ceived update of The Beggar's Opera. This has of course been tried before, most famously and triumphantly 70 years ago in the Brecht-Weill Threepenny Opera which gave us Mack the Knife and Lotte Lenya and the shark with the shiny teeth, dear, as he shows them pearly white.

No sign of sharks in Nick Dear's The Vil- lains' Opera; just a vast, sprawling and large- ly unsuccessful attempt to get Macheath and Polly Peachum and all into the present-day setting of Essex villains and Docklands dodgers. Stephen Warbeck's new score is equally ambitious and eclectic, but wildly unsuited to a company largely made up of non-singers. Neither Dear nor Warbeck nor their director Tim Supple seem to have decided quite what to go for here; a kind of English Cagney movie on stage, or a morali- ty play, or a comic opera, or a gangland sin- galong of the kind once pioneered by Joan Littlewood at Stratford East.

Much better National news at the Cottes- loe, however, where Nunn's long run of bad luck with new plays has been broken by the premiere of Joe Penhall's BluelOrange. Not since Duet for One, Tom Kempinski's barely disguised study of Jacqueline du Pre and her psychiatrist, and that's almost 20 years ago, has there been a better or more enthralling drama about the world of men- tal health. We are in a hospital somewhere in England now; of the only three charac- ters, one (Chiwetel Ejiofor) is a black schizophrenic in imminent danger of being returned to the farcical 'care in the commu- nity' system, except that in his case there is no care and no community outside the hos- pital wall. A young, idealist psychiatrist (Andrew Lincoln) has been assigned to his case, but there is also his apparent mentor, an older and infinitely more political doctor (Bill Nighy in the performance of the night), whose interests are really only in his own career advancement and the research fodder, or at least the much-needed empty bed, that the unfortunate and lonely patient might provide.

What starts as a case history of schizophrenia and its current treatment possibilities rapidly develops into a battle between the two doctors, both flawed and finally both unable to deal with the patient, so obsessed have they become with their own survival and supremacy within the sys- tem. Joe Penhall has come up with a cyni- cal, savage but brilliantly argued account of what has gone wrong with a mental health service now bound up in its own internal battles for survival, as budgets are slashed and patients are hurled back onto the unforgiving streets to fend for themselves.

At the Shaftesbury, something about Toulouse-Lautrec and the cancan and `Oh no! Egg-hunting saboteurs! Montmartre circa 1890 has once again brought out the very worst; who now recalls Jose Ferrer stumbling about on his kneecaps in a truly terrible John Huston movie of the mid-1950s, or that Cole Porter's Can-Can was one of his few really dud scores?

Undeterred by showbiz history, let alone art history, Charles Aznavour has come up with Lautrec, a musical which is not by any means a catastrophe on the Tess or Which Witch scale; it just really isn't very good. A large cast of amazingly tall women manage to make Sevan Stephan look about the right height for little Lautrec, while the book by Shaun McKenna touches all the right buttons about the painter's dysfunc- tional family, disastrous parenting, nervous breakdowns and obsessive interest in leggy showgirls flashing their frilly knickers at an audience. But the musical fails to make us care about Lautrec or his work because we never really get to meet the man, just a lookalike with some good songs.

And finally to the Vaudeville comes Kathleen Chalfant in Wit, trailing clouds of glory and many awards from off-Broadway where it has only just closed after more than two years. I fear its chances over here are not so strong; the tale of a cranky old John Donne expert coming to terms with cancer is honourable and well told, but there is something maddeningly tutorial and distanced about the whole venture, as though the notion that unlovable people can also die horrible deaths is somehow a revelation.