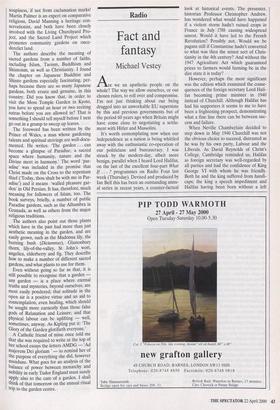 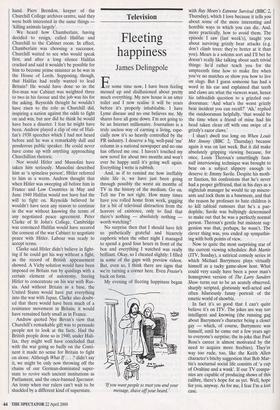 Are we an apathetic people on the whole? The way we allow ourselves, or our chosen rulers, to roll over and compromise. I'm not just thinking about our being dragged into an unworkable EU superstate by this and previous governments but of the period 60 years ago when Britain might have come close to negotiating a settle- ment with Hitler and Mussolini.

It's worth contemplating now when our independence as a nation is being whittled away with the enthusiastic co-operation of our politicians and bureaucracy. I was struck by the modern-day, albeit more benign, parallel when I heard Lord Halifax, on the last of the excellent four-part What If . . . ? programmes on Radio Four last week (Thursday). Devised and produced by Ian Bell this has been an outstanding annu- al series in recent years, a counter-factual look at historical events. The presenter, historian Professor Christopher Andrew, has wondered what would have happened if a violent storm hadn't ruined crops in France in July 1788 causing widespread unrest. Would it have led to the French Revolution? Possibly not. Would we be pagans still if Constantine hadn't converted to what was then the minor sect of Chris- tianity in the 4th century? And without the 1947 Agriculture Act which guaranteed prices to farmers would farming be in the dire state it is today?

However, perhaps the most significant was the edition which examined the conse- quences of the foreign secretary Lord Hali- fax becoming prime minister in 1940 instead of Churchill. Although Halifax has had his supporters it seems to me to have been a frightening prospect, demonstrating what a fine line there can be between suc- cess and failure.

When Neville Chamberlain decided to step down in May 1940 Churchill was not the obvious choice to succeed, distrusted as he was by his own party, Labour and the Liberals. As David Reynolds of Christ's College, Cambridge reminded us, Halifax as foreign secretary was well-regarded by all parties and had the confidence of King George VI with whom he was friendly. Both he and the king suffered from handi- caps; the king a speech impediment and Halifax having been born without a left hand. Piers Brendon, keeper of the Churchill College archives centre, said they were both interested in the same things `killing animals largely'.

We heard how Chamberlain, having decided to resign, called Halifax and Churchill to the Cabinet room. In effect, Chamberlain was choosing a successor. Churchill waited to see who would speak first, and after a long silence Halifax cracked and said it wouldn't be possible for him to become prime minister as he was in the House of Lords. Supposing, though, that Halifax had really wanted to lead Britain? He would have done so as the five-man war Cabinet was weighted three to two in his favour and the job was his for the asking. Reynolds thought he wouldn't have risen to the role as Churchill did, inspiring a nation against the odds to fight on and win, but nor did he think he would have been a disaster. I fear he might have been. Andrew played a clip of one of Hali- fax's 1938 speeches which I had not heard before and he was a remarkably dull and ponderous public speaker. He could never have come up with anything approaching Churchillian rhetoric.

Nor would Hitler and Mussolini have taken him seriously. Mussolini described him as 'a spineless person', Hitler referred to him as a worm. Andrew thought that when Hitler was sweeping all before him in France and Low Countries in May and June 1940 Halifax would not have had the will to fight on. Reynolds believed he wouldn't have seen any reason to continue in the war without knowing the terms of any negotiated peace agreement. Peter Clarke of St John's College, Cambridge was convinced Halifax would have secured the consent of the war Cabinet to negotiate peace with Hitler. Labour was ready to accept terms.

Clarke said Hitler didn't believe in fight- ing if he could get his way without a fight, as the record of British appeasement showed. A Vichy solution would have been imposed on Britain run by quislings with a certain element of autonomy, freeing Hitler to concentrate on his war with Rus- sia. And without Britain as a base, the United States would have put everything into the war with Japan. Clarke also doubt- ed that there would have been much of a resistance movement in Britain; it would have remained fairly small as in France.

Andrew quoted Nye Bevan's view that Churchill's remarkable gift was to persuade people not to look at the facts. Had the British people done so in 1940, under Hali- fax, they might well have concluded that with the war going so badly on the Conti- nent it made no sense for Britain to fight on alone. Although What If . ? didn't say it, we might be only now throwing off the chains of our German-dominated super- state to revive such ancient institutions as Parliament, and the once-banned Spectator. An irony when our rulers can't wait to be shackled by a different kind of superstate.