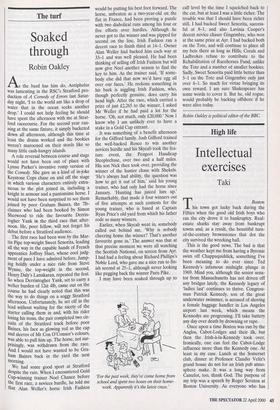 Athe bard has him do, Antipholus was lamenting in the RSC's Stratford pro- duction of A Comedy of Errors last Satur- day night, 'I to the world am like a drop of water that in the ocean seeks another drop.' I could not help feeling he should have spent the afternoon with me at Strat- ford racecourse. For the second year run- ning at the same fixture, it simply bucketed down all afternoon, although this time at least the drains worked and the bookies weren't marooned on their stools like so many little cash-hungry islands. A role reversal between course and stage would not have been out of place with Lynne Parker's inventive romp version of the Comedy. She gave us a kind of in-joke Keystone Cops chase on and off the stage in which various characters entirely extra- neous to the plot joined in, including a knight in armour and a pantomime horse. I would not have been surprised to see them joined by poor Graham Baines, the 71b- claimer who had been booked by Simon Sherwood to ride the favourite Derrin- togher Yank in the third race that after- noon. He, poor fellow, will not forget his debut before a Stratford audience.

The first race had been won by the Mar- tin Pipe top-weight Sweet Senorita, leading all the way in the capable hands of French apprentice Joffrey Huet, whose cool judg- ment of pace I have admired before. Jump- ing boldly under a nice ride from Steve Wynne, the top-weight in the second, Henry Daly's Lannkaran, repeated the feat. So when Derrintogher Yank, set to carry a welter burden of 12st 41b, came out on the course he had clearly noted that this was the way to do things on a soggy Stratford afternoon. Unfortunately, he set off in the lead without waiting for the nicety of the starter calling them in and, with his rider losing his irons, the pair completed two cir- cuits of the Stratford track before poor Baines, his face as glowing red as the cap and sleeves of Mr Con O'Connor's colours, was able to pull him up. The horse, not sur- prisingly, was withdrawn from the race. And I would not have wanted to be Gra- ham Baines back in the yard the next morning. We had some good sport at Stratford despite the rain. When I encountered Gold Cup-winning trainer Noel Chance before the first race, a novices hurdle, he told me that Alan Weller's horse Irish Fashion would be putting his best foot forward. The horse, unbeaten as a two-year-old on the flat in France, had been proving a puzzle with two diabolical runs among his four or five efforts over hurdles. Although he never got to the winner and was pipped for second on the line, Irish Fashion ran a decent race to finish third at 14-1. Owner Alan Weller had backed him each way at 33-1 and was well pleased. He had been thinking of selling off Irish Fashion but will now give Noel another season to find the key to him. As the trainer said, 'If some- body else did that now we'd have egg all over our faces.' He reckons something in his back is niggling Irish Fashion, who, though perfectly genuine, does carry his head high. After the race, which carried a prize of just £2,265 to the winner, I asked Mr Weller if he had paid a lot for the horse. 'Oh, not much, only £20,000.' Now I know why I am unlikely ever to have a stake in a Gold Cup entrant.

It was something of a benefit afternoon for the Gifford family. Josh Gifford trained the well-backed Rosco to win another novices hurdle and his Skycab took the fea- ture event, the Peugeot Handicap Steeplechase, over two and a half miles. His son Nick then took over, providing the winner of the hunter chase with Shekels. `He's always had ability, the question was how to get it out of him,' said his young trainer, who had only had the horse since January. 'Hunting has juiced him up.' Remarkably, that made it four winners out of five attempts at such contests for the young trainer, who is based at Captain Ryan Price's old yard from which his father rode so many winners. Earlier, when Skycab went in, somebody called out behind me, 'Why is nobody cheering home the winner? That's another favourite gone in.' The answer was that at that precise moment we were all watching the Scottish National, on screen from Ayr. I had had a feeling about Richard Phillips's Noble Lord, who gave me a nice run to fin- ish second at 25-1, although never looking like pegging back the winner Paris Pike.

I may have been soaked through up to For the past week, they've come home from school and spent two hours on their home- work. Apparently it's the latest craze.' calf level by the time I squelched back to the car, but at least I was a little richer. The trouble was that I should have been richer still. I had backed Sweet Senorita, success- ful at 8-1, and also Lavinia Cooper's decent novice chaser Gingembre, who won at the same price at Ayr. I had backed both on the Tote, and will continue to place all my bets there as long as Hills, Corals and Ladbrokes refuse to contribute to the Rehabilitation of Racehorses Fund, unlike the Tote and a number of smaller bookies. Sadly, Sweet Senorita paid little better than 5-1 on the Tote and Gingembre only just over 6-1. So much for virtue bringing its own reward. I am sure Shakespeare has some words to cover it. But he, old rogue, would probably be backing offshore if he were alive today.