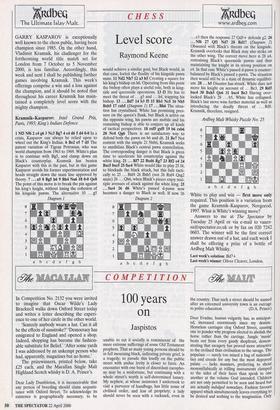 GARRY KASPAROV is exceptionally well known to the chess public, having been champion since 1985. On the other hand, Vladimir Kramnik, his challenger for the forthcoming world title match set for London from 7 October to 5 November 2000, is less familiar. Accordingly, this week and next I shall be publishing further games involving Kramnik. This week's offerings comprise a win and a loss against the champion, and it should be noted that throughout his career Kramnik has main- tained a completely level score with the mighty champion.

Kramnik-Kasparov: Intel Grand Prix, Paris, 1995; King's Indian Defence 1 Nf3 N116 2 c4 g6 3 Nc3 Bg7 4 e4 d6 5 d4 0-0 In a crisis, Kasparov can always be relied upon to wheel out the King's Indian. 6 Bet e5 7 d5 The patent variation of Tigran Petrosian, who was world champion from 1963 to 1969. White's plan is to continue with Bg5, and clamp down on Black's counterplay. Kramnik has beaten Kasparov with this in the past, but in this game Kasparov avoids his former experimentation and heads straight down the main line approved by theory. 7 ... a5 8 Bg5 h6 9 Bh4 Na6 10 0-0 Qe8 The point of this move is to break the pin against his king's knight, without losing the cohesion of his kingside pawns. The alternative 10 ...

Diagram 1 would achieve a similar goal, but Black would, in that case, forfeit the fluidity of his kingside pawn mass. 11 Nd2 Nh7 12 a3 h5 Creating a square for his king's bishop on h6. Operating from this point the bishop often plays a useful role, both in king- side and queenside operations. 13 f3 He has to meet the threat of ... g5 and h4, trapping his bishop. 13 ... Bd7 14 b3 f5 15 Rb1 Nc5 16 Nb5 Bxb5 17 cxb5 (Diagram 1) 17 ...Bh6 The situa- tion has crystallised. White has promising pres- sure on the queen's flank, but Black is active on the opposite wing, his pawns are mobile and his remaining bishop is able to conjure up all kinds of tactical perspectives. 18 exf5 gxf5 19 b6 cxb6 20 Nc4 Qg6 There is no satisfactory way to defend both the pawn on b6 and d6. 21 Bel Not content with the simple 21 Nxb6, Kramnik seeks to annihilate Black's central pawn constellation. The corresponding danger is that Black is given time to accelerate his counterplay against the white king. 21 ... Rf7 22 Bxd6 Rg7 23 Rf2 e4 24 Bxe5 bxe5 25 fxe4 White would like to play 25 f4, to blockade the black attack, but this fails tacti- cally to 25 ... Bxf4 26 Bxh5 (not 26 Rxf4 Qxg2 mate) 26 ... Qh6, when Black's pieces enjoy mul- tiple avenues of attack against the white king. 25 fxe4 26 d6 White's passed d-pawn now becomes a danger to Black as well. If now 26 Diagram 2 e3 then the response 27 Qd5+ defends g2. 26 Nf6 27 Qfl Nd7 28 Rd1? (Diagram 2) Obsessed with Black's threats on the kingside, Kramnik overlooks that Black may also strike on the other wing. The correct move here is 28 a4, restraining Black's queenside pawns and thus maintaining the knight in its strong position on c4. In that case White's passed d-pawn is counter- balanced by Black's passed e-pawn. The situation then would still be in a state of dynamic equilibri- um. 28 b5 Disaster has struck. White dare not move his knight on account of Be3. 29 Rd5 bxc4 30 BxhS Qe6 31 bxc4 Be3 Having over- looked Black's 28 ... b5, White has collapsed. Black's last move wins further material as well as introducing the deadly threat of ... Kramnik, therefore, resigned.

Ardbeg Malt Whisky Puzzle No. 25 White to play and win — first move only required. This position is a variation from the game Kramnik-Kasparov, Novgorod, 1997. What is White's winning move?

Answers to me at The Spectator by Tuesday 25 April or via e-mail to vanes- sa@spectator.co.uk or by fax on 020 7242 0603. The winner will be the first correct answer drawn out of a hat, and each week I shall be offering a prize of a bottle of Ardbeg Malt Whisky.