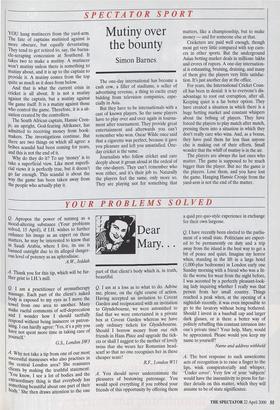 Mutiny over the bounty

YOU hang mutineers from the yard-arm. The fate of captains mutinied against is more obscure, but equally devastating. They tend to get retired to, say, the barna- cle-scraping concession at Southend. It takes two to make a mutiny. A mutineer won't mutiny unless there is something to mutiny about, and it is up to the captain to provide it. A mutiny comes from the top quite as much as it does from below.

The South African captain, Hansie Cron- je, an upright, God-fearing Afrikaner, has admitted to receiving money from book- makers. The investigations continue. But there are two things on which all agree: a bribes scandal had been coming for years, and this is not the end of it.

Why do they do it? To say 'money' is to take a superficial view. Like most superfi- cial views it is perfectly true, but it doesn't go far enough. This scandal is about the way the game has been taken away from the people who actually play it. The one-day international has become a cash cow, a filler of stadiums, a seller of advertising revenue, a thing to excite crazy bidding from television companies, espe- cially in Asia.

But they have to be internationals with a cast of known players. So the same players have to play over and over again in tourna- ment after tournament. They provide great entertainment and afterwards you can't remember who won. Oscar Wilde once said that a cigarette was perfect, because it gave you pleasure and left you unsatisfied. One- day cricket is the same. Journalists who follow cricket and care deeply about it groan aloud at the ordeal of the one-dayers. They can't remember who won either, and it's their job to. Naturally the players feel the same, only more so. They are playing not for something that matters, like a championship, but to make money — and for someone else at that.

Cricketers are paid well enough, though most get very little compared with top earn- ers in other sports. But the underground Asian betting market deals in millions: lakhs and crores of rupees. A one-day internation- al is exhausting, bruising, draining, and many of them give the players very little satisfac- tion. It's just another day at the office.

For years, the International Cricket Coun- cil has been in denial: it is to everyone's dis- advantage to root out corruption, after all. Keeping quiet is a far better option. They have created a situation in which there is a huge betting market and constant whispers about the bribing of players. They have forced the players to play match after match, pressing them into a situation in which they don't really care who wins. And, as a bonus, they have paid them far less than anyone else is making out of their efforts. Small wonder that the whiff of mutiny is in the air.

The players are always the last ones who matter. The game is supposed to be much bigger than the player. But no: the game is the players. Lose them, and you have lost the game. Hanging Hansie Cronje from the yard-arm is not the end of the matter.