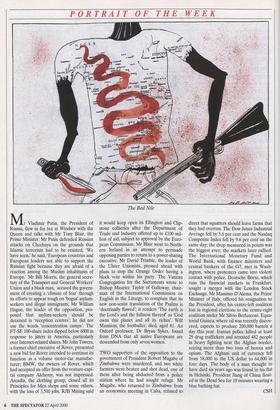 The Red Nile Mr Vladimir Putin, the President of Russia, flew in for tea at Windsor with the Queen and talks with Mr Tony Blair, the Prime Minister. Mr Putin defended Russian attacks on Chechnya on the grounds that Islamic terrorism had to be resisted; 'We have seen,' he said, 'European countries and European leaders not able to support the Russian fight because they are afraid of a reaction among the Muslim inhabitants of Europe.' Mr Bill Morris, the general secre- tary of the Transport and General Workers' Union and a black man, accused the govern- ment of creating a 'climate of fear' through its efforts to appear tough on 'bogus' asylum- seekers and illegal immigrants; Mr William Hague, the leader of the opposition, pro- posed that asylum-seekers should be detained in 'reception centres'; he did not use the words 'concentration camps'. The FT-SE 100-share index dipped below 6000 in response to jitters in America, particularly over Internet-related shares. Mr John Towers, a former chief executive of Rover, presented a new bid for Rover intended to continue its function as a volume motor-car manufac- turer; BMW, the owners of Rover, which had accepted an offer from the venture-capi- tal company Alchemy, was not impressed. Arcadia, the clothing group, closed all its Principles for Men shops and some others, with the loss of 3,500 jobs. RIB Mining said it would keep open its Ellington and Clip- stone collieries after the Department of Trade and Industry offered up to £100 mil- lion of aid, subject to approval by the Euro- pean Commission. Mr Blair went to North- ern Ireland in an attempt to persuade opposing parties to return to a power-sharing executive. Mr David Trimble, the leader of the Ulster Unionists, pressed ahead with plans to stop the Orange Order having a block vote within his party. The Vatican Congregation for the Sacraments wrote to Bishop Maurice Taylor of Galloway, chair- man of the International Commission on English in the Liturgy, to complain that its new non-sexist translation of the Psalms is `doctrinally flawed'; it renders 'The earth is the Lord's and the fullness thereof' as 'God owns this planet and all its riches'. Wilf Mannion, the footballer, died, aged 81. An Oxford professor, Dr Bryan Sykes, found from DNA that all native Europeans are descended from only seven women, TWO supporters of the opposition to the government of President Robert Mugabe of Zimbabwe were murdered, and two white farmers were beaten and shot dead, one of them after being abducted from a police station where he had sought refuge. Mr Mugabe, who returned to Zimbabwe from an economics meeting in Cuba, refused to direct that squatters should leave farms that they had overrun. The Dow Jones Industrial Average fell by 5.6 per cent and the Nasdaq Composite Index fell by 9.6 per cent on the same day; the drop measured in points was the biggest ever; the markets later rallied. The International Monetary Fund and World Bank, with finance ministers and central bankers of the G7, met in Wash- ington, where protesters came into violent contact with police. Deutsche Borse, which runs the financial markets in Frankfurt, sought a merger with the London Stock Exchange. Mr Massimo D'Alema, the Prime Minister of Italy, offered his resignation to the President, after his centre-left coalition lost in regional elections to the centre-right coalition under Mr Silvio Berlusconi. Equa- torial Guinea, where oil was recently discov- ered, expects to produce 200,000 barrels a day this year. Iranian police killed at least 29 drug traffickers and arrested 482 people in heavy fighting near the Afghan border, seizing more than two tons of heroin and opium. The Afghani unit of currency fell from 58,000 to the US dollar to 64,000 in four days. The body of a man thought to have died six years ago was found in his flat in Helsinki. President Jiang of China float- ed in the Dead Sea for 10 minutes wearing a blue bathing hat.