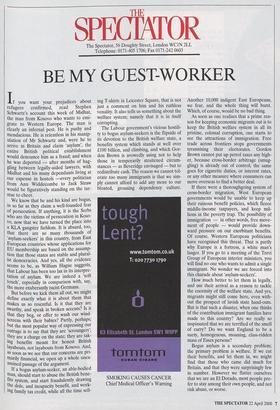 If you want your prejudices about refugees confirmed, read Stephen Schwartz's account this week of Midhat, the man from Kosovo who wants to emi- grate to Western Europe. The man is clearly an infernal pest. He is pushy and mendacious. He is relentless in his manip- ulation of Mr Schwartz and, were he to arrive in Britain and claim 'asylum', the entire British political establishment would denounce him as a fraud; and when he was deported — after months of hag- gling between legally-aided lawyers, with Midhat and his many dependants living at our expense in hosteN —every politician from Ann Widdecombe to Jack Straw would be figuratively standing on the tar- mac to cheer.

We know that he and his kind are bogus, in so far as they claim a well-founded fear of persecution. If anything, it is the Serbs who are the victims of persecution in Koso- vo, now that we have turned the place into a KLA gangster fiefdom. It is absurd, too, that there are so many thousands of `asylum-seekers' in this country, from East European countries whose applications for EU membership are based on the assump- tion that those states are stable and plural- 1st democracies. And yes, all the evidence seems to be, as William Hague suggests, that Labour has been too lax in its interpre- tation of asylum. We are indeed a 'soft touch', especially in comparison with, say, the more exuberantly racist Germans. But before we kick them all out, we might define exactly what it is about them that makes us so resentful. Is it that they are swarthy, and speak in broken accents? Is it that they beg, or offer to wash our wind- screens with their babies? Partly, perhaps; but the most popular way of expressing our outrage is to say that they are `scroungers'; they are a charge on the state; they are tak- ing benefits meant for honest British layabouts, not layabouts from Kosovo. And, as soon as we see that our concerns are pri- marily financial, we open up a whole unex- amined passage of the argument. If a bogus asylum-seeker, an able-bodied man, should start to abuse the British bene- fits system, and start fraudulently drawing the dole, and incapacity benefit, and work- ing family tax credit, while all the time sell- ing T-shirts in Leicester Square, that is not just a comment on him and his ruthless venality. It also tells us something about the welfare system; namely that it is in itself corrupting.

The Labour government's vicious hostili- ty to bogus asylum-seekers is the flipside of its devotion to the British welfare state, a benefits system which stands at well over £100 billion, and climbing, and which Gor- don Brown is avowedly using not to help those in temporarily straitened circum- stances — as Beveridge envisaged — but to redistribute cash. The reason we cannot tol- erate too many immigrants is that we sim- ply cannot afford to add any more to our bloated, groaning dependency culture. Another 10,000 indigent East Europeans, we fear, and the whole thing will burst. Which, of course, would be no bad thing.

As soon as one realises that a prime rea- son for keeping economic migrants out is to keep the British welfare system in all its pristine, colossal corruption, one starts to see the attractions of immigration. Free trade across frontiers stops governments tyrannising their electorates. Gordon Brown cannot put up petrol taxes any high- er, because cross-border arbitrage (smug- gling) is already out of control; the same goes for cigarette duties, or interest rates, or any other measure where consumers can move overseas to find a better deal.

If there were a thoroughgoing system of cross-border migration, West European governments would be unable to keep up their ruinous benefit policies, which fleece middle-income taxpayers, and keep mil- lions in the poverty trap. The possibility of immigration — in other words, free move- ment of people — would provide down- ward pressure on our exorbitant benefits. Of course, Western European politicians have recognised this threat. That is partly why Europe is a fortress, a white man's laager. If you go to a meeting of the Trevi Group of European interior ministers, you will find no one who wants to admit a single immigrant. No wonder we are forced into this charade about 'asylum-seekers'.

How much better to let them in legally, and use their arrival as a reason to tackle the enormity of the welfare state. And yes, migrants might still come here, even with- out the prospect of lavish state hand-outs. But is that such a disaster, when one thinks of the contribution immigrant families have made to this country? Are we really so inspissated that we are terrified of the smell of curry? Do we want England to be a suety, homogenous, moaning, class-ridden mass of Essex persons?

Bogus asylum is a secondary problem; the primary problem is welfare. If we cut their benefits, and let them in, we might find that those who came did much for Britain, and that they were surprisingly few in number. However we flatter ourselves that we are an El Dorado, most people pre- fer to stay among their own people, and not risk abuse, or worse.