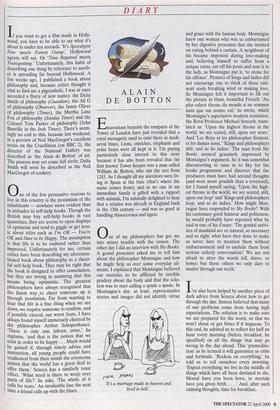 If you want to get a film made in Holly- wood, you have to be able to say what it's about in under ten seconds. 'It's Apocalypse Now meets Forrest Gump,' Hollywood agents will say. Or 'Time Regained meets Trainspotting.' Unfortunately, this habit of describing one thing by reference to anoth- er is spreading far beyond Hollywood. A few weeks ago, I published a book about philosophy and, because critics thought it vital to find me a pigeonhole, I was at once accorded a flurry of new names: the Delia Smith of philosophy (Guardian), the Ali G of philosophy (Observer), the Jamie Oliver of philosophy (Times), the Martha Lane Fox of philosophy (Sunday Times) and the Colonel Tom Parker of philosophy (John Banville in the Irish Times). There's seem- ingly no end to this, because last weekend, in a preview of Neil MacGregor's excellent series on the Crucifixion (on BBC 2), the director of the National Gallery was described as 'the Alain de Botton' of art. The process may yet come full circle; Delia Smith will soon be described as the Neil MacGregor of cookery.

0 ne of the few persuasive reasons to live in this country is the pessimism of the inhabitants — nowhere more evident than in attitudes to self-help books. Though the British may buy self-help books in vast quantities, they are averse to open displays of optimism and tend to giggle or get iron- ic about titles such as I'm OK — You're OK and Dare to be Happy. The assumption is that life is to be endured rather than improved. Unfortunately for me, certain critics have been describing my aforemen- tioned book about philosophy as a cheer- ful self-help book. They may be right that the book is designed to offer consolation, but they are wrong in assuming that this means being optimistic. The greatest philosophers have always recognised that the finest way ,to cheer someone up is through pessimism. Far from wanting to hear that life is a fine thing when we are down, we require someone to confirm, and if possible exceed, our worst fears. I have always found myself immensely cheered by the philosopher Arthur Schopenhauer. There is only one inborn error,' he explains, 'and that is the notion that we exist in order to be happy . . . Much would be gained if, through timely advice and instruction, all young people could have eradicated from their minds the erroneous notion that the world has a great deal to offer them.' Seneca has a similarly tonic effect. 'What need is there to weep over parts of life?' he asks, 'The whole of it calls for tears.' An invaluable line the next time a friend calls up with the blues. Excavations beneath the ramparts of the Tower of London have just revealed that a royal menagerie used to exist there in medi- aeval times. Lions, ostriches, elephants and polar bears were all kept in it. I'm paying particularly close interest to this story because it has also been revealed that the first known Tower keeper was a man called William de Botton, who ran the zoo from 1243. As I thought all my ancestors were liv- ing in Spain at the time (that's where the name comes from), and as no one in my immediate family is gifted with a rapport with animals, I'm naturally delighted to hear that a relative was already in England back in the 13th century — and was so good at handling rhinoceroses and tigers.

One of my philosophers has got me into minor trouble with the censor. The other day I did an interview with Sky Books. A genial presenter asked me to tell him about the philosopher Montaigne and how he might help us over some everyday ail- ments. I explained that Montaigne believed our societies to be afflicted by terrible prudery about the body and that the solu- tion was to start calling a spade a spade. In Montaigne's day, at least, representative stories and images did not identify virtue `It's a marriage made in heaven and lived in hell.' and grace with the human body. Montaigne knew one woman who was so embarrassed by her digestive processes that she insisted on eating behind a curtain. A neighbour of his became impotent during love-making and, believing himself to suffer from a unique curse, cut off his penis and sent it to the lady, as Montaigne put it, 'to atone for his offence'. Pictures of kings and ladies did not encourage one to think of these emi- nent souls breaking wind or making love. So Montaigne felt it important to fill out the picture in blunt, beautiful French: 'Au plus esleve throne du monde si ne sommes assis que sus nostre cul,' he wrote, which Montaigne's superlative modern translator, the Revd Professor Michael Screech, trans- lated as: 'Upon the highest throne in the world, we are seated, still, upon our arses.' And 'Les Roys et les philosopher fientent, et les dames aussi,"Kings and philosophers shit; and so do ladies.' The man from Sky Books seemed genuinely impressed by Montaigne's argument. So it was somewhat disconcerting to tune in to Sky for the books programme and discover that the producers must have had second thoughts (and were more prudish than a reverend), for I found myself saying, 'Upon the high- est throne in the world, we are seated, still, upon our beep' and 'Kings and philosophers beep; and so do ladies.' How might Mon- taigne have responded to Sky Books? With his customary good humour and politeness, he would probably have repeated what he said in one of his Essays: 'The genital activi- ties of mankind are so natural, so necessary and so right: what have they done to make us never dare to mention them without embarrassment and to exclude them from serious orderly conversation? We are not afraid to utter the words kill, thieve, or betray; but those others we only dare to mutter through our teeth.'

I've also been helped by another piece of dark advice from Seneca about how to get through the day. Seneca believed that many of our problems come from having high expectations. The solution is to make sure we are prepared for the worst, so that we won't shout or get bitter if it happens. To this end, he advised us to reflect for half an hour every morning (before breakfast, he specified) on all the things that may go wrong in the day ahead. This 'premedita- tion' as he termed it will guarantee us calm and fortitude. 'Reckon on everything,' he told us to tell ourselves every morning. `Expect everything; we live in the middle of things which have all been destined to die. Mortal have you been born, to mortals have you given birth. . . . ' And, after such calming thoughts, time for breakfast.