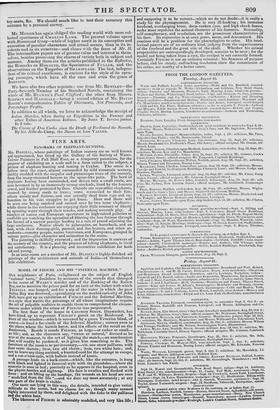 MODEL OF FIESCHI AND HIS "INFERNAL MACHINE."

Ova neighbours of Paris, enlightened on the subject of English "national taste," doubtless by accounts of the crowds that thronged to the scene of WEARE'S murder and of the Burking of the Italian Boy, not to mention the prices paid for an inch of the halter with which THURTELL was hanged, and for a sip of the water in which the poor Italian Boy was drowned,-speculating on the morbid curiosity of John Bull, have got up an exhibition of FrEsent and the Infernal Machine, in a style that merits the patronage of all whose imaginations require the aid of palpable realities to enable them to comprehend the circum- stances under which the crime of FIESCIII was perpetrated. The first floor of the house in Coventry Street, Haymarket, has been fitted tip to represent FIESCHI'S garret on the Boulevard. In front of the window-which is screened by a green Venetian blind, of course-is fixed a fac-simile of the Infernal Machine ; correct even to the places where the barrels burst, and de effects of the recoil on the framework. Beside it stands FIESCHI, as large-or rather as small- as life; and, as the showmen say, "twice as natural," dressed as he was at the moment, in the act of lighting the match,-an anachronism that will readily be pardoned, as it gives him something to do. The furniture of the room is as per inventory,-viz. one straw palliasse, with four rents therein ; item, two old chairs ; item, two white hats; and, not to leave any thing omitted, a knotted cord for the attempt to escape, and a cat-o'nine-tails, with bullets instead of knots. A passage leads to a back-room-which, like the entrance, is hung with black and lighted in funereal style with tin girandoles-where the assassin is seen in bed ; precisely as he appears in the hospital, even to the physic-bottles and nightcap. His face is swollen and flushed with fever : and on lifting up the bandage, the wounds on his head are seen " modelled from the life "-and we dare say most accurately; at any rate part of the brain is visible. Our taste not lying in this way, the details, intended to give verisi- militude to the scene, had no charm for us; though many seemed highly interested by them, and delighted with the holes in the palliasse ano the white bats.

The likeness of FIESCHI is admirably modelled, and very like life; and supposing it to be correct-which we do not doubt-it is really a study for the physiognomist. He is very ill-looking ; his immense forehead, overhanging brow, deep-sunken eyes, and high cheek-bones, make more repulsive the animal character of his features. Sensuality, self.complacency, and resolution, are the prominent characteristics of his face. Its expression is at once gross, mean, and determined. His cranium will be a problem for the phrenologists to solve. His intel- lectual powers are of no ordinary kind, judging from the capaciousness of the forehead and the great size of the skull. Whether his animal propensities are correspondingly developed, remains to be seen ; for the model not being taken from a cast, the occiput is not correctly formed. Certainly FIESCHI is not an ordinary criminal : his firmness of purpose before, and his steady, unflinching resolution since the commission of his crime, are worthy of a better cause.