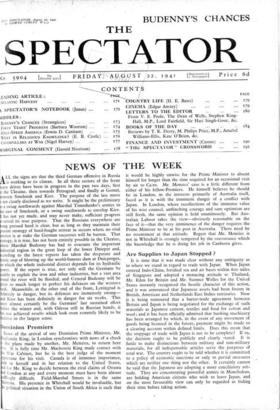 News of the arrival of one Dominion Prime Minister, Mr. Mackenzie King, in London synchronises with news of a check D the plans made by another, Mr. Menzies, to return here Is°. It is fully time Mr. Mackenzie King made contact with he War Cabinet, but he is the best judge of the moment IPportune for his visit. Canada is of immense importance, loth in herself and in her relation to the United States, nd for Mr. King to decide between the rival claims of Ottawa nd London at any and every moment must have been almost raingly difficult. Field-Marshal Smuts is in the same anima. His presence in Whitehall would be invaluable, but he political situation in the Union of South Africa is such that it would be highly unwise for the Prime Minister to absent himself for longer than the time required for an occasional visit by air to Cairo. Mr. Menzies' case is a little different from either of his fellow-Premiers. He himself believes he should be in London, in the interests primarily of Australia itself, faced as it is with the imminent danger of a conflict with Japan. In London, where recollections of the immense value of his wise counsel, unflinching courage and sane optimism are still fresh, the same opinion is held unanimously. But Aus- tralian Labour takes the view—obviously reasonable on the face of it—that the very imminence of the danger requires the Prime Minister to be at his post in Australia. There need be no resentment at that attitude. Regret that Mr. Menzies is not in Whitehall is strongly tempered by the i eassurance which the knowledge that he is doing his job in Canberra gives.