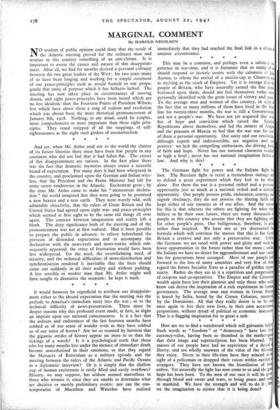 This may be a common, and perhaps even a salutary,

e1, perience in war-time, and it is fortunate that so many of of should respond to historic events with the calmness of late Austen, to whom the arrival of a muslin-cap at Chawton was as exciting as the crash of Empires. Yet it is strange that the people of Britain, who have assuredly earned the fine mit bestowed upon them, should not feel themselves today more personally identified with the great issues of victory and peace To the average men and women of this country, in spite of the fact that so many millions of them have lived in the front line for twenty-three months, the war is still a Governmental and not a peoples war. We have not yet acquired that wide fire of hope and conviction which raised the Spanish Republicans above themselves, and led the miners of Aram and the peasants of Murcia to feel that the war was for each of them a personal opportunity. Our unity and our resolution, although superb and indestructible, are negative and not positive : we lack the compelling enthusiasm, the driving force, of faith and hope. Never has our national character reached so high a level ; never has our national imagination fallen so low. And why is this?