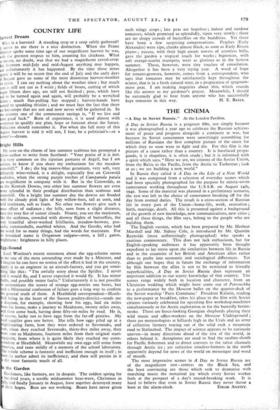 o me one of the most astounding ever made by a Minister, and imagine he can have no notion of the effect it had in the country. pply it to an engineer in an aircraft-factory, and you get some- ing like this : " I'm awfully sorry about the Spitfire. I never 'd it would fly, and I never expected it would fly. It has minor auks, and possibly major faults." Unfortunately it is not possible

o authenticate the scores of strange egg-stories one hears, but uch a Ministerial confession of failure goes a long way to confirm e general truth of them. A Heathfield correspondent—Heath- e:d being in the heart of the Sussex poultry-district—sends me diagram, for example, showing how his eggs, laid six miles rom his home, make a journey to Maidstone, twenty miles away, nd then come back, having done fifty-six miles by road. He is,

f course, lucky not to have eggs from the far-off prairies. My ocal supplier goes one better. She tells how eggs piled up at a eighbouring farm, how they were ordered to Sevenoaks, and ow, when they reached Sevenoaks, thirty-five miles away, they re sent to Maidstone, fourteen miles from their original start- g-point, from where it is quite likely they reached my corre- pondent at Heathfield. Meanwhile my own eggs still come from erica, and taste mildly of a memory of the school laboratory. e whole scheme is fantastic and inefficient enough in itself ; to ave its author admit its inefficiency, and then still persist in it the most fantastic touch of all.