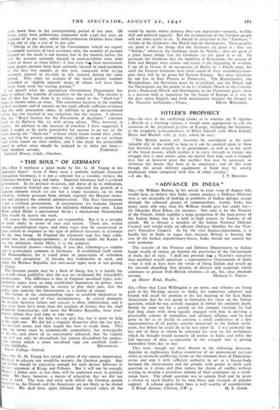 Sut,—Sir William Barton, in his article in your issue of August 8th, would have us believe that India cannot produce a Defence Minister who is not incapable of looking at problems of Indian defence except through the coloured glasses of communalism. Surely, India has many more able sons than Sir William would give her credit for— Sir Sikander Hyat Khan, for instance. Not only is he the Premier of the Punjab, which supplies a large proportion of the man-power of the Indian Army, but he is held in high esteem by Indians of all creeds. He is already a member of the Indian National Defence Council and would make an efficient Defence Member for the Vice- roy's Executive Council. As for the vital finance-department, it is hardly fair to India to argue that, because Britain is bearing the cost of the Indian expeditionary-forces, India should not control her own economy.

The transfer of the Finance and Defence Departments to Indian hands would, of course, go beyond the provisions of the Government of India Act of 1935. I shall not pretend that a Viceroy's executive thus modified would constitute a representative Government of India —but it will at least have the virtue of being Indian and would go far towards dispelling that miasma of distrust and suspicion which continues to poison Indo-British relations.—I am, Sir, your obedient