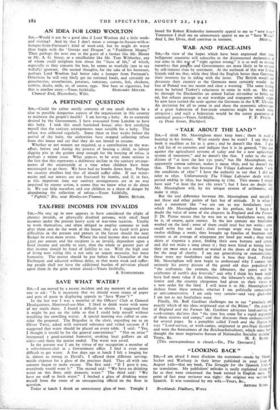 AN IDEA FOR LORD WOOLTON

Sut,—Would it not be a good idea if Lord Woolton did a little week- end visiting? And by that I don't mean a cottage-in-Sussex-with-a- hamper-from-Fortnum's kind of week-end, but he might do worse than begin with the ' George and Dragon ' at " Puddleton Magna." Then perhaps the next one as the guest of a farmer like Mr. Hosier or Mr. A. G. Street, or a smallholder like Mr. Tom Wibberley, any of whom could enlighten him about the "facts of life," of which, especially as they concern the hen, he seems so woefully (not to say wilfully) ignorant. On second thoughts, for the sake of his hostesses, perhaps Lord Woolton had better take a hamper from Fortnum's. Otherwise he will very likely get no rationed foods, and certainly no gooseberries, strawberries, potatoes, tomatoes, carrots, fish, chickens, rabbits, ducks, milk, or, of course, eggs. Nor beer or cigarettes, but that is another story.—Yours faithfully, MARGARET MILLER. Chancel End, Heytesbury, Wilts.