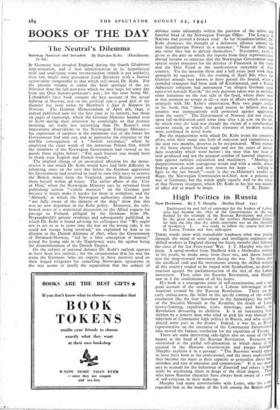 IF Germany had invaded England during the fourth Gladstone administration, and if that administration in its hypothetical exile had undergone some reconstruction (which is not unlikely), then fate might have presented Lord Rosebery with a literary opportunity comparable to that which still awaits Dr. Koht. For the present volume is rather the brief apologia of the ex- Minister than the full narrative which we may hope for some day from the Oslo history-professor's pen ; for the time being Mr. Lehmkhul's little book remains the best account of the actual fighting in Norway, and on the political side a good deal of the thunder has been stolen by Hambro's I Saw It Happen In Norway. The German Memorandum of April 9th, 1940, is indeed published now for the first time in its entirety, but those 19 pages of typescript, which the German Minister handed over to Koht during their interview by candlelight on that historic morning, are really less interesting than Dr. Mailer's own impromptu observations to the Norwegian Foreign Minister— his expression of surprise at the enormous size. of the forces his Government had sent out, and in particular his reference to the terrible consequences of a " foolish resistance," when he employed the exact words of the notorious Poland film, which the members of the Norwegian Government had viewed as his guests three nights before : " For such horrors you would have to thank your English and French friends."

The implied charge of an un-neutral affection for the demo- cracies is one which Dr. Koht would have had little difficulty in rebutting, since on the very day before the German aggression his Government had resolved to send its own little navy to remove the British mines from the Vestfjord, unless Britain removed them herself within 48 hours. The earlier affairs of the ' City of Flint,' when the Norwegian Minister says he refrained from publishing certain " violent menaces " on the German part because it might make it harder for them to withdraw, and the Altmark,' in which the Norwegian authorities claimed to be " not fully aware of the identity of the ship," show that this was no new departure in the Koht policy. Moreover, the cele- brated notes of a ministerial discussion on the Allied request for passage to Finland, pillaged by the Germans from Mr. Nygaardsvold's private residence and subsequently published, in which Dr. Koht is found advising his colleagues that " We ought not to act so as to come into the war on the wrong side, if we could not escape being involved," are explained by him as an allusion to the Danish dilemma of r8o7, when the Government of Denmark-Norway, " led by a false conception of honour," joined the losing side in the Napoleonic wars, the upshot being the dismemberment of the Danish Empire.

On the subject of national defence Dr. Koht's outlook appears to have been less realistic ; for the circumstance that his was the name the Germans (who are experts in these matters) Used on their forged telegrams for cancelling Norwegian operations in the war seems to justify the supposition that the subject of

defence came informally within the purview of the active and forceful head of the Norwegian Foreign Office. The League of Nations had proved a broken reed. As for Scandinavianism, Dr, Koht dismisses the thought of a defensive alliance among the four Scandinavian Powers in a sentence : " None of them had any other idea but to defend themselves." November, 1936, is given as the date on which the reports from their representatives abroad became so ominous that the Norwegian Government took special secret measures for the defence of Finnmark in the north and the Oslo Fjord at the south-eastern extremity of their country. Yet the invasion three and a half years Later took them strangely by surprise. On the evening of April 8th, when the German armada was known to have passed the Sound, when a crolvded transport had been sunk off Kristiansand, and a British Admiralty telegram had announced "an alleged German naval operation towards Narvik," the only decision taken was to mobilise some battalions on the east side of the fjord, where there were at that moment no troops at all—a state of affairs which contrasts strangely with Mr. Koht's observation, only two pages earlier in his book, that " there was good reason to believe that the country was comparatively well protected against aggression from the south." The Government of Norway did not resolve upon full mobilisation until some time aftgr 1.3o a.m. on the 9th, by which time the land was already the victim of a synchronised surprise attack, in which all three elements of modern warfare were combined in novel form.

But the *magnanimity with which Dr. Koht treats his country's allies, with their many sins both of omission and commission in the next two months, deserves to be reciprocated. What matters is the brave choice Norway made and not the years of laissez- faire neutrality which went before ; the men that her hour of trial produced and not the unequal combat of hurried improvisa- don against ruthless calculation and machinery. " Meeting all disappointments with courageous words and with a smile, always fording new chances and new reason for hope . . . willing to fight to the last breath "—such is the ex-Minister's verdict on Ruge, the Norwegian Commander-in-Chief, now a prisoner of war in Germany, but the words apply equally well to the whole of that Norway resurgent, which Dr. Koht in his last ten months of office did so much to shape. T. K. DERRY.