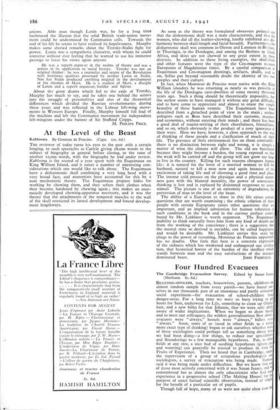 At the Level of the Beast

Kabloona. By Gontran de Poncins. (Cape. I2S. 6d.) THE reviewer of today turns his eyes to the past with a certain longing, to such spectacles as Carlyle giving i8,000 words to the subject of biography in general before closing, to the tune of another 12,000 words, with the biography he had under review. Kabloona is the record of a year spent with the Esquimaux on King William Island, and it raises a number of interesting con- siderations which one would like to talk about. The Esquimaux have a disharmonic skull combining a very long head with a very broad face, and anatomists have accounted for this by a neat mechanistic theory. The Esquimaux prepare - hides for working by chewing them, and they soften their, clothes when they become hardened by chewing again ; this makes an enor- mously developed chewing-apparatus necessary, and it was the theory that the attachments of the temporal muscles to the wall of the skull restricted its lateral development and forced develop- ment lengthways. As soon as the theory was formulated observers pointed out that the disharmonic skull was a male characteristic, and that the women, who did all the leather-chewing, hardly exhibited any cis. harmony between skull-length and facial breadth. Furthermore, the disharmonic skull was common in Oleron and Lannion in Brittany, in Thuringia, in the Dordogne, and among the Berbers in No Africa, and skins are not chewed to any great extent in these districts. In addition to these living examples, the skull-form and other features were the type of the Cro-magnon western Europeans of Magdalenian times. By a careful comparison of Esquimaux and Cro-magnon drawings, artifacts, skulls, and so on, Sollas put beyond reasonable doubt the identity of the two peoples and their culture.

In fact, when Monsieur de Poncins went native with the King William islanders he was returning as nearly as was possible to the life of the Dordogne cave-dwellers of some twenty thousand years ago. Such a thing should be theoretically impossible, but the author seems to have managed it without any great difficulty, and to have come to appreciate and almost to enjoy the simple brutality of these human vermin. The Esquimaux have been described from a ,detached point of view in the main ; anthro. pologists such as Boas have described their customs, manners and economics, without entering their minds ; and there has been a good deal of tourist-writing of their cheerfulness, friendliness, and so on, which obviously is the product of a cosy ignorance of their ways. Here we have, however, a close approach to the way of thinking of these people and a clarjfication of much of their life. The pressure of their environment lies on them constantly: there is no distinction between right and wrong, it is simply a matter of what the climate will allow. The old are butchered because they might become a burden, the young exposed so that the weak will be carried off and the group will not grow too large to live in the country. Killing for such 'reasons cheapens human life : it is natural for the lover of a married woman to kill the husband, natural to kill a man now and again because of the excitement of taking life and of choosing a good time and place. The intense cold presses on the physique and a physical numb- ness goes with the blunted morality, the power of consecutive thinking is lost and is replaced by disjointed responses to casual stimuli. The picture is one of an extremity of degradation, the perversion of man to the level of the beast.

The ability of a European to share in this life raises certain questions that are worth examining ; the ethnic 'elation of these people with certain Europeans raises other questions that are important, and an implied admiration for human toleration of such conditions in the book and in the curious preface contri- buted by Mr. Linklater is worth argument. The -Esquimau.? inability to think naturally frees him from any kind of 'doubt and from the working of the conscience ; there is a suggestion that the mental state so derived is enviable, can be called happiness, and would be desirable. Mr.- Linklater envies this state but clings to the power of reasoning, Monsieur de Poncins apparently has no doubts. One feels that here is a concrete: expression of the sickness which has .Weakened and endangered our civilica- tion, that hysterical horror of the burden of the intellect which stands between man and the easy satisfactions of the instinct-