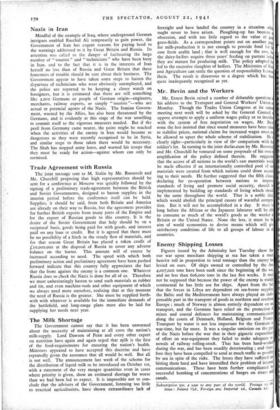 The Government cannot say that it has been unwamed about the -necessity of maintaining at all costs the nation's milk-supply. Lord Dawson of Penn and every other expert on nutrition have again and again urged that milk is the first of the food-requirements for ensuring the nation's health. Ministers appeared to have accepted this doctrine and have repeatedly given the assurance that all would be well. But all is not well. The announcement last week of the scheme for the distribution of liquid milk to be introduced on October 1st, with a statement of the very meagre quantities even in cases where priority is given, show an estimated shortage far worse than we had been led to expect. It is impossible not to con- clude that the advisers of the Government, listening too little to practical agriculturists, have shown extraordinary lack of foresight and have landed the country in a situation w ought never to have arisen. Ploughing-up has become obsession, and with too little regard to the value of g grass-fields. As a correspondent points out on another p for milk-production it is not enough. to provide food for cow from arable land ; that is well enough for the cow, the dairy-heifers require three years' feeding on pasture bef they are mature for producing milk. The policy adopted led to the excessive slaughter of heifers. The Ministries of F and Agriculture can settle the question of responsibility haw them. The result is disastrous to a degree which has quite inadequately recognised as yet.