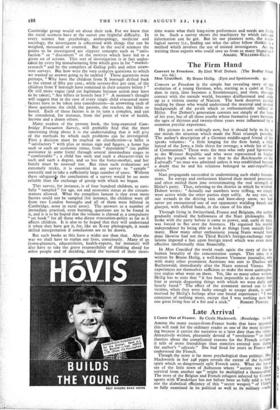 Men Crucified. By Bruno Heilig. (Eyre and Spottiswoode. 9s.) Convert to Freedom is the simple but revealing story of the evolution of a young German, who, starting as a cadet at Pots. dam in 1919, later becomes a Stormtrooper, and then, through contact with the outside world, becomes disillusioned and ends up as a violent enemy of Nazism. The book deserves careful reading by those -who would understand the material and mental backgrounds of the yo,ith which so enthusiastically rallied to Hitler. For Dobert's generation consists not simply of the boys of his year, but of all those youths whose formative years between the ages of thirteen and twenty-three years were influenced by a common psychic experience.

His picture is not strikingly new, but it should help to fix in our minds the situation which made the Nazi triumph possible. The author's description of a German middle-aged friend of his speaks volumes : " a little longing for the firm hand; a little hatred of the Jews; a little thirst for revenge; a whole lot of fear of Communism." These were the men who only paid lip-service to the Weimar Republic and who were represented in higher places by people who saw to it that to the Reichswehr or the Luftwaffe "no man was admitted unless it was established beyond a doubt that he and his relations belonged to anti-republican circles."

Nazi propaganda succeeded in undermining such shaky founda- tions. Its energy and enthusiasm blurred their mental processes, and often misled them into overestimating the real strength of Hitler's party. Thus, referring to the district in which he worked, Dobert writes : " Actually our numbers were trifling, we simply were active while the other parties slept softly. At any rate, on our errands in the driving rain and knee-deep snow, we had never yet encountered one of our opponents wielding brush and gluepot, with chilled hands, in the cause of his idea."

Through living in Switzerland, France and Belgiuin, the author gradually realised the hollowness of the Nazi philosophy. He broke with the party before it came to power, and, early in 1933, was forced to flee over the frontiers. He regained his mental independence by being able to look at things from outside Ger- many. How many other enthusiastic young Nazis would have done likewise had not the Third Reich's foreign-exchange regu- lations imposed a ban upon foreign travel which was even more effective intellectually than financially.

In Men Crucified the world reads again the story of the in- human brutality of the concentration camps. This time it is written by Bruno Heilig, a well-known Viennese journalist, who with many other prominent Austrians was sent to Dachau and Buchenwald, immediately after the Nazis entered Vienna. His experiences are themselves sufficient to make the most unimagina- tive realise what went on there. Yet, like so many other writers, Heilig has to state that "it has been impossible to do more than hint at certain disgusting things with which we were daily and hourly faced." The effect of the treatment meted out to the victims, when they were lucky enough to escape death, is sum- marised by Heilig's feelings after one brutal experience: " I was conscious of nothing more, except that I was nothing now but one great living fear of a fist and a stick." ROBERT POWELL.