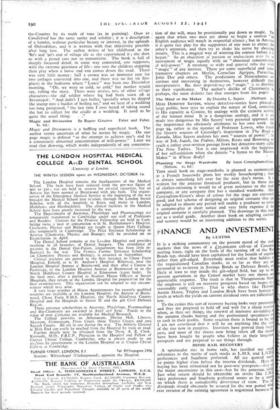 Page 22, 22 August 1941 — Magic and Divination is a baffling and superficial book. The
Close

Magic and Divination is a baffling and superficial book. The

author seems uncertain of what he means by magic. On one page magic is defined " as the attempt to achieve one's end by a consciously abnormal concentration of will-power." Later we read that dowsing, which works independently of any concentra-

tion of the will, must be provisionally put down to magic. Yet again that when two men are about to begin a contest "an English audience will watch in respectful silence ; but in America it is quite fair play for the supporters of one man to attract the other's attention, and then try to shake his nerve by shouting insults. This is a magical way of winning the contest before it is begun." So an ebullition of passion or enthusiasm may be an instrument of magic equally with an " abnormal concentration of will-power." A meaning so wide and general robs the word " magic " of any interest. There are some superficial and unin. formative chapters on Merlin, Cornelius Agrippa, Paracelsus, John Dee and others. The predictions of Nostradamus are curious and interesting in themselves, however difficult their interpretation. Bu. their dependence on " magic " is as doubtful as their significance. The author's dislike of Christianity is, perhaps, the most definite fact that emerges from his pages.