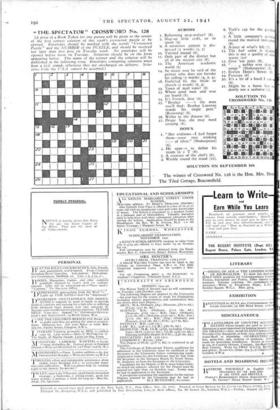 Book Token for one guinea will be given to the sender of the first correct solution of this week's crossword puzzle to be opened. Envelopes should be marked with the words "Crossword Puzzle" and the NUMBER of the PUZZLE, and should be received not later than first post on Tuesday week. No envelopes will be opened before noon on Tuesday. Solutions should be on the form appearing below. The name of the winner and the solution will be published in the following issue. Envelopes containing solutions must bear a 21d. stamp, otherwise they are surcharged on delivery. Solu- tions from the U.S.A cannot he aecepted.1 //

IL Only part of the district but all of the ancient city (8). 12. The American academic world (6)

7: A little company's gathe round the musical instr (8).