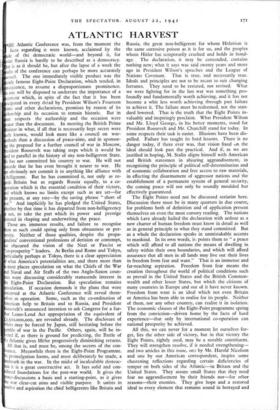 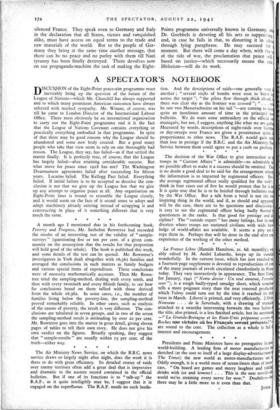 HE Atlantic Conference was, from the 'moment the facts regarding it were known, acclaimed by the ole of the democratic world—and beyond it, for 'let Russia is hardly to be described as a democracy. at is as it should be, but after the lapse of a week the ults of the conference can perhaps be more accurately eased. The one immediately visible product was the eady famous Eight-Point Declaration, which tended, in nsequence, to assume a disproportionate prominence. o one will be disposed to underrate the importance of a cument which, in spite of the fact that it has been ticipated in every detail by President Wilson's Fourteen nts and other declarations, promises by reason of its thorship and its occasion to remain historic. But in me respects the authorship and the occasion were eater than the document. In meeting the British Prime Mister in what, if all that is necessarily kept secret were ade known, would look more like a council on war- thods than a discussion of peace-aims, and in sponsor- g the proposal for a further council of war in Moscow, esident Roosevelt was taking steps which it would be rd to parallel in the history of any non-belligerent State. e has not committed his country to war. He will not ncede that he has even brought it nearer to war. He n obviously not commit it to anything like alliance with belligerent. But he has committed it, not only as re- rds Britain but as regards Russia equally, to a co- eration which is the essential condition of their victory, d which knows no limits except such as are set—for e present, at any rate—by the saving phrase " short of ar." And implicitly he has pledged the United States, hether by that time it has departed from non-belligerency not, to take the part which its power and prestige emand in shaping and underwriting the peace.

Those are immense results, and failure to recognise em as such could spring only from obtuseness or per- ersity. Neither of those qualities, despite the propa- ndists' conventional professions of derision or contempt, s obscured the vision of the Nazi or Fascist or co-prosperity " leaders. At Berlin and Rome and Tokyo, articularly perhaps at Tokyo, there is a clear appreciation what America's potentialities are, and there more than most places speculation on what the Chiefs of the War d Naval and Air Staffs of the two Anglo-Saxon coun- es were discussing considerably transcends interest in e Eight-Point Declaration. But speculation remains eculation. if occasion demands it the plans that were certed at the Atlantic Conference will reveal them- Ives m operation. Some, such as the co-ordination of merican help to Britain and to Russia, and President oosevelt's announced intention to ask Congress for a fur- er Lease-Lend Act appropriation of the equivalent of 2,500,000,000, are revealed already. The disclosure of thers may be forced by Japan, still hesitating before the amble of war in the Pacific. Others, again, will be in- rred if, as there is ground for predicting, the Battle of e Atlantic gives Hitler progressively diminishing returns. All that is, and must be, among the secrets of the con- rence. Meanwhile there is the Eight-Point Programme. s promulgation forms, and must deliberately be made, a dmark in the war. In the midst of incalculable destruc- on it is a great constructive act. It lays solid and con- dered foundations for the post-war world. It gives the eace-discussions a basis and a starting-point, as it gives he war clear-cut aims and visible purpose. It unites in solve and aspiration the chief belligerents like Britain and Russia, the great non-belligerent for whom Hitlerism is the same corrosive poison as it is for us, and the peoples whom Hitler has temporarily crushed and holds in bond- age. The declaration, it may be contended, contains nothing new; what it says was said twenty years and more ago in President Wilson's speeches and the League of Nations Covenant. That is true, and necessarily true. Ideals and principles are not to be recast to suit changing fortunes. They need to be restated, not revised. What we were fighting for in the last war was something pro- foundly and fundamentally worth achieving, and it has not become a whit less worth achieving through past failure to achieve it. The failure must be redeemed, not the stan- dard lowered. That is the truth that the Eight Points in- valuably and inspiringly proclaim. What President Wilson and Mr. Lloyd George, in his better moments, stood for President Roosevelt and Mr. Churchill stand for today. In some respects their task is easier. Illusions have been dis- pelled. Failure has taught its hard lessons. There is no danger today, if there ever was, that vision fixed un the ideal should look past the practical. And if, as we are justified in hoping, M. Stalin aligns himself with American and British statesmen in abjuring aggrandisement, in recognising the principle of political self-determination and of economic collaboration and free access to raw materials, in effecting the disarmament of aggressor nations and the establishment of a permanent system of general security, the coming peace will not only be soundly moulded but effectively guaranteed.

The Eight Points need not be discussed seriatim here. Discussion there must be in many quarters in due course, for problems both of definition and of application present themselves on even the most cursory reading. The nations which Lave already hailed the declaration with ardour as a new charter of human freedom must know in detail as well as in general principle to what they stand committed. But as a whole the declaration speaks in unmistakable accents to mankind. In its own words, in points them to " a peace which will afford to all nations the means of dwelling in safety within their own boundaries, and which will afford assurance that all men in all lands may live out their lives in freedom from fear and want." That is an immense and far-reaching aspiration. Freedom from fear means the creation throughout the world of political conditions such as prevail in the United States and the British Common- wealth and other lesser States, but which the citizens of many countries in Europe and out of it have never known. Freedom from want is an ideal which not even Britain or America has been able to realise for its people. Neither of them, nor any other country, can realise it in isolation. The economic clauses of the Eight-Point programme spring from the conviction—driven home by the facts of hard experience—that only by international co-operation can national prosperity be achieved.

All this, we can never for a moment let ourselves for- get, lies the other side of victory, but in that victory the Eight Points, rightly used, may be a notable constituent. They will strengthen resolve, if it needed strengthening— and two articles in This issue, one by Mr. Harold Nicolson and one by our American correspondent, inspire some chastening reflections regarding certain deficiencies of temper on both sides of the Atlantic—in Britain and the United States. They assure small States that they need fear no aggrandisement by their friends nor—for other reasons—their enemies. They give hope and a restored ideal to every element that remains sound in betrayed and silenced France. They speak even to Germany and Italy in the declaration that all States, victors and vanquished alike, must have access on equal terms to the .trade and raw materials of the world. But to the people of Ger- many they bring at the same time another message, that there can be no peace and no parley with them till Nazi tyranny has been finally destroyed. There devolves now on our propaganda-machine the task of making the Eight- Points programme universally known in Germany, Dr. Goebbels is devoting all his arts to suppressing and, in case he fails in that, to distorting it in adv through lying paraphrase. He may succeed for moment. But there will come a day when, with the of the tide of war, the proclamation that peace will based on justice—which necessarily means the end Hitlerism—will do its work.