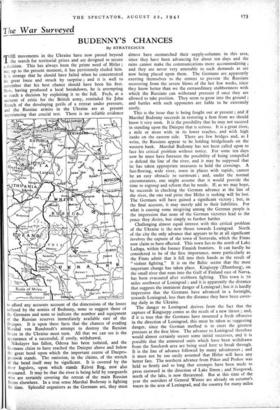 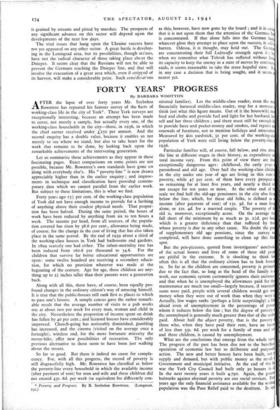 THE movements in the Ukraine have now passed beyond the search for territorial prizes and are designed to secure a decision. This has always been the prime need of Hitler ; but, up to the present moment, it has persistently eluded him. It is strange that he should have failed when he concentrated his great force and struck by surprise ; and it is well to remember that his best chance should have been his first. New, having produced a local breakdown, he is attempting to reach a decision by exploiting it to the full. Foch, at a moment of crisis for the British army, reminded Sir John French of the developing perils of a retreat under pressure, and the Russian armies in the Ukraine are at present experiencing that crucial test. There is no reliable evidence to afford any accurate account of the dimensions of the losses suffered by the armies of Budenny, none to suggest those of the Germans and none to indicate the number and equipment of the Russian reserves immediately available east of the Dnieper. It is upon these facts that the chances of evading Marshal von Rundstedt's attempt to destroy the Russian forces in the Ukraine must turn. All that we can see is the appearance of a, successful, if costly, withdrawal.

Nikolayev has fallen, Odessa has been isolated, and the Germans claim to have reached the Dnieper above and below th.z great bend upon which the important centre of Dnepro- petrovsk stands. The omission, in the claims, of the stretch of the bend itself may be significant. It is covered by the river Ingulets, upon which stands Krivoi Rog, now also evacuated. It may be that the river is being held by rearguards Who are certainly covering the retreat of the main Russian forces elsewhere. In a true sense Marshal Budenny is fighting for time. Splendid organisers as the Germans are, they must almost have outmarched their supply-columns in this area, since they have been advancing for about ten days and the rains cannot make the communications more accommodating ; and they are never very amenable to such demands as are now being placed upon them. The Germans are apparently exerting themselves to the utmost to prevent the Russians recovering from the severe blows of the last few weeks, since they know better than we the extraordinary stubbornness with which the Russians can withstand pressure if once they are allowed to take position. They seem to grow into the ground ; and battles with such opponents are liable to be extremely costly.

This is the issue that is being fought out at present ; and if Marshal Budenny succeeds in restoring a firm front we should know it very soon. It is the possibility that he may not succeed in standing upon the Dnieper that is serious. It is a great river, a mile or more wide in its lower reaches, and with high banks on the eastern side. There are few bridges and, as I write, the Russians appear to be holding bridgeheads on the western bank. Marshal Budenny has not been called upon to face his critical problem without notice. For some ten days now he must have foreseen the possibility of being compelled to defend the line of the river, and it may be supposed that he has taken appropriate measures to hold the crossings. A fast-flowing, wide river, sown in places with rapids, cannot be an easy obstacle to surmount ; and, under the normal circumstances, one might assume that it would provide the time to regroup and reform that he needs. If, as we may hope, he succeeds in checking the German advance at the line of the river, the one real prize that Hitler is seeking will be lost. The Germans will have gained a significant victory ; but, in the final account, it may merely add to their liabilities. For what is causing some misgiving among the German people is the impression that none of the German victories lead to the peace they desire, but simply to further battles.

Challenging almost equal interest with this critical problem of the Ukraine is the new thrust towards Leningrad. North of the city the only advance that appears to be at all significant involves the capture of the town of Sortavala, which the Finns now claim to have effected. This town lies to the north of Lake Ladoga, within the former Finnish frontiers. It can hardly be considered to be of the first importance, more particularly as the Finns admit that it fell into their hands as the result of " violent fighting." It is on the Baltic sector that the most important change has taken place. Kingisepp (Zhamburg), on the small river that runs into the Gulf of Finland east of Nary?, has been evacuated after stubborn fighting. This town is 70 miles southwest of Leningrad ; and it is apparently the distance that suggests the imminent danger of Leningrad; but it is hardly impressive that the Germans have advanced in a fortnight, towards Leningrad, less than the distance they have been cover- ing daily in the Ukraine.

The danger to Leningrad derives from the fact that the capture of Kingisepp comes as the result of a new thrust ; and, if it is true that the Germans have mounted a fresh offensive in the direction of Leningrad, this must be taken as suggesting danger, since the German method is to exert the greatest pressure at the first blow. The advance to Leningrad therefore would almost certainly secure some initial successes, and it is possible that the armoured units which have been withdrawn from the Smolensk area are being used here to break through. It is the line of advance followed by many adventurers ; and it must not be too easily assumed that Hitler will have any better fate. The northern advance from Pskov and Porkov was held so firmly and so long that attempts have been made to press eastward in the direction of Lake Ilmen ; and Novgorod, north of the lake, is now threatened. But at this time of the year the outriders of General Winter are already on autumn's traces in the area of Leningrad, and the country for many miles is grained by streams and pitted by marshes. The prospects of any significant advance on this sector will depend upon the developments of the next few days.

The vital issues that hang upon the Ukraine success have not yet appeared on any other sector. A great battle is develop- ing in the Leningrad area, but its possibilities, though serious, have not the radical character of those taking place about the Dnieper. It seems clear that the Russians will not be able to prevent the Germans reaching the Dnieper line, and that will involve the evacuation of a great area which, even if stripped of its harvest, will make a considerable prize. Such considetaf tans as this, however, have now gone by the board ; and it is cet that it is not upon them that the attention of the German S is concentrated. If that alone falls into the German whatever gloss they attempt to place upon the success, it will barren. Odessa,‘ it is thought, may hold out. The Germ are concentrating their full Luftwaffe strength upon it ; b when we remember what Tobruk has suffered without lo its capacity to keep the enemy in a state of nerves by continu raids, it seems.reasonable to take the more hopeful view. It in any case a decision that is being sought, and it seems nearer yet.