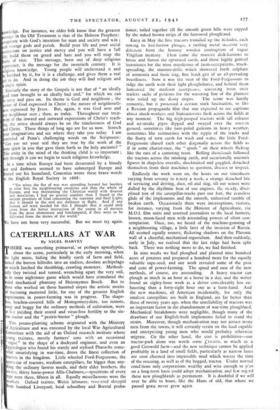 HERE was something primaeval,' or perhaps apocalyptic, about the scene, particularly in the early morning, when e light mists, hiding the kindly earth of farm and field, urned the barren hillsides into an endless, desolate archipelago n which lurched the throbbing, crawling monsters. Methodi- ally they twisted and turned, wrenching apart the very soil, in some nightmare game which would have stimulated the tird mechanical phantasy of Heironymus Bosch. But to ose who worked on those haunted slopes the artistic merits tractoring mattered little, for one of the greatest English xperiments in power-farming was in progress. The shape- ss, bracken-covered hills of Montgomeryshire, too remote, teep and boggy for the ordinary methods of cultivation, were last yielding their stored and virus-free fertility to the six- on tractor and the "yrairie-buster " plough.

This potato-planting scheme originated with the Ministry f Agriculture and was executed by the local War Agricultural matinee with the aid of an Oxford research institute whose oung trainees, mostly farmers' sons with an occasional rogue" in the shape of a dockyard engineer, and even an yptologist who found his stately and stylised Pharaohs some- hat unsatisfying in war-time, drove the finest collection of ctors in the kingdom. Little wheeled Ford-Fergussons, the ports-car of tractors, medium caterpillars, far bigger than any- ng the ordinary farmer needs, and their elder brothers, the tx-ton, thirty horse-power Allis-Chalmers,—specimens of every . Pe were there, fifteen in all. Equally miscellaneous were the orkers. Oxford trainee, Welsh labourer, trousered shopgirl rom bombed Liverpool, local schoolboy and Borstal proba- tioner, toiled together till the smooth green hills were capped by the naked brown strips of the furrowed ploughland.

Early in May the first tractors trundled up the hillsides, each towing its five-furrow plouga, a rattling metal sketeton very different from the homely wooden contraption of vague Virgilian memory. "I hen came the massive disk-harrows to breaK and flatten the upturned earth, and those highly genteel uostitutes for the most murderous of farm-occopations, muck- spreading, the manure-drills which showered forth sulphate of ammonia and basic slag, fine black grit of an all-pervading beastliness. Now it was the turn of the Ford-Fergussons to ridge the earth with their light ploughshares, and behind them lumoered the medium caterpillars, scattering from their trailers sacks of potatoes for the wavering line of the planters who toiled up the dusty slopes. The scene was hardly romantic, but it possessed a certain stark fascination, so like a Russian propaganda film that one expected to see captions about shock-workers and Stakhanovites flash across the fields at any moment. The big high-pooped tractors with tall exhaust and air-intake pipes dipped and swayed over the uneven ground, sometimes like bare-poled galleons in heavy weather, sometimes like submarines with the ripple of the tracks and the flurry of torn earth for wash and wake, the little Ford- Fergussons chased each other diagonally across the fields as if in some chariot-race, the " spuds " on their wheels flicking like the ears of a cantering team. Rolling dustciouds followed the tractors across the smoking earth, and occasionally uncouth figures in shapeless overalls, shockhaired and goggled, detached themselves from their machines to question, discuss or inspect.

Endlessly the work went on, the hours on our timesheets varying from seventy to ninety a week, a strange detached life of servicing and driving, dust, oil and slag, till our senses were dulled by the rhythmic beat of our engines, the steady, disci- plined trot of the caterpillar-tracks past our feet, the ceaseless glide of the implements and the smooth, unhurried tumble of broken earth. Occasionally there were interruptions, visitors, for instance, varying from the Minister of Agriculture, via M.O.I. film units and assorted journalists to the local farmers, brown, moon-faced men with astounding powers of silent con- templation. Once, too, we heard of the machine-gunning of a neighbouring village, a little later of the invasion of Russia. All seemed equally remote, flickering shadows on the Platonic wall of a cheerful, mechanised ergastulum. And then suddenly, early in July, we realised that the last ridge had been split back. There was nothing more to do, we had finished.

In nine weeks we had ploughed and planted nine hundred acres of potatoes and prepared a hundred more for the equally valuable rape-seed, and our work revealed some of the pros and cons of power-farming. The speed and ease of the new methods, of course, are astounding. A heavy tractor can plough as much in an hour as a horse in a day, and the writer found an eighty-hour week as a driver considerably less ex- hausting than a forty-eight hour one as a farm-hand. And the new machines, all American incidentally, for only the smallest caterpillars are built in England, are far better than those of twenty years ago, when the unreliability of tractors was an important factor in the abandonment of war-time ploughland. Mechanical breakdowns were negligible, though many of the drawbars of our English-built implements failed to stand the strain. Moreover, though mechanisation may not attract many men from the towns, it will certainly retain on the land capable and enterprising young men who would probably otherwise migrate. On the other hand, the cost is prohibitive—our tractor-park alone was worth some £ to,oco, as much as a good Cotswold farm—and the new technique cannot be applied profitably in a land of small fields, particularly as narrow lanes are soon churned into impassable mud which wastes the time of the rescuing, as well as of the bogged, tractor. Under normal conditions only corporations wealthy and wise enough to plan on a long-term basis could adopt mechanisation, and few regard these new ploughlands as permanent. It is doubtful if we will ever be able to boast, like the Huns of old, that where we passed grass never grew again