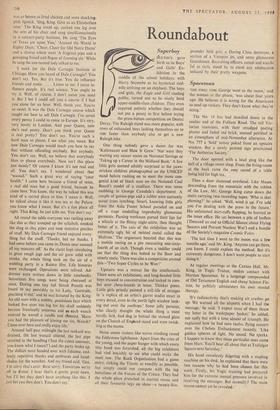 One thing nobody gave a damn for was 'Kalamazoo and How It Grew.' Nor were they wasting any saucer stares on National Savings or 'Taking up a Career in the Midland Bank.' A few little girls seemed adultly surprised at the yaws- stricken children photographed on the UNICEF stand before rushing on to meet the more con- genial kind of black men on the National Coal Board's model of a coalface. There was some mobbing in George Cansdale's department. A couple of guinea-pigs and a rabbit were narrowly saved from lynching. Smart, knowing little girls from the Aida Foster School paraded on and off a stage modelling improbably glamorous garments. Passing workmen pursed their lips for a whistle at the flimsy night-attire, then thought better of it. The axis of the exhibition was an extremely ugly bit of twisted metal called the 'Hultron.' The organisers boasted that this was a mobile resting on a pin measuring one-sixty- fourth of an inch. Though even a toddler could see that the thing *as bolted to the floor and utterly static. There was also a competition around this—`Two Super Cycles to be Won !'

Upstairs was a retreat for the intellectuals. There were art exhibitions, and long-headed little boys encased in concentration and locked in com- bat over chess-boards in tense, Thinker poses. Little girls prissily painted a still-life of oranges in 'a replica of an artist's garret studio exact in every detail, even to the north light window look- ing out over the rooftops.' Some jolly parsons, who clearly thought the whole thing a most terrific lark, had dug in behind the stained glass on the Church of Ensiand stand and were twink- ling at the mums.

Noise smote visitors like waves crashing round the Eddystone lighthouse. Apart from the cries of the young, and the paper banger with which every tiny hand was furnished, all the big exhibitors had vied boyishly to see who could make the most row. The Rank Organisation had a game entry, sinking the Titanic as rowdily as possible, but simply could not compete with the big battalions of the Forces of the Crown. They had the whole place drenched in martial music and all their favourite toys on show—a twenty-five- pounder field gun, a Daring Class destroyer, a section of a Vampire jet, and some glamorous Guardsmen. Recruiting officers, casual and watch- ful as tarts, stood by to enrol any adolescents seduced by their pretty weapons.

'THE FIRST TIME George went to the moon,' said the woman at the phone, 'was about four years ago. He believes it is wrong for the Americans to send up rockets. They don't know what they're doing.'

The No. 14 bus had dawdled down to the seedier end of the .Fulham Road. The tall Vic- torian mansions, with their smudged peeling plaster and faded red brick, seemed petrified in an atmosphere of mid-November afternoon. At No. 757 a 'Sold' notice poked from an upstairs window. But a newly painted sign proclaimed 'The Aetherius Society.'

The door opened with a loud ping like the bell of a village sweet shop. From the living-room at the back came the cosy sound of a table being laid for high tea.

Then a door slammed overhead. Like Moses descending from the mountain with the tablets of the Law, Mr. George King came down the stairs carrying two recording tapes. 'Who is that phoning?' he asked. 'Well, wind it up. I've told you I'm dealing with the press in the future.' His unfastened shirt-cuffs flapping, he hurried to the inner office. He sat between a pile of leaflets (Demand an end to Official Silence about Flying Saucers and Prevent Nuclear War') and a bundle of the Society's magazine Cosmic Voice.

'The last time I went to the moon was a few months ago,' said Mr. King. 'Anyone can go there, you know. I could explain the method. But it's extremely dangerous. I don't want people to start doing it.'

At regular meetings at the Caxton Hall, Mr. King, in Yogic Trance, makes contact with Martian Spacemen. In a language compounded of Old Testament English and cheap Science Fic- tion, he publicly administers his own mental therapy.

'It's radioactivity that's making air crashes go up. We warned all the airports when I had the message,' he said. 'I expect most of them threw my letter in the wastepaper basket,' he added, not sadly but with a tone almost of triumph. He explained how he had seen twelvt. flying saucers over the Chelsea Embankment recently. 'Like golden spheres of light. No sound. No sparks. I happen to know that these particular ones came from Mars. You'll hear all about that at Trafalgar Square next Saturday.'

His hand ceaselessly fidgeting with a stapling machine on his desk, he explained that there were two reasons why he had been chosen for this work. Firstly, his Yogic training had prepared him for the extreme mental pressure involved in receiving the messages. But secondly? The main reason cannot yet be revealed.