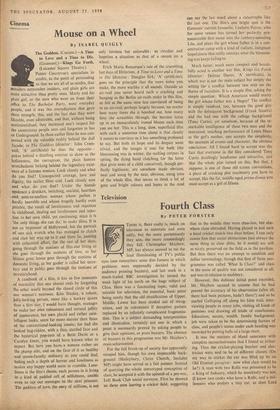 Mouse on a Wheel

By IS ABEL QUIGLY The Goddess. (Curzon.)—A Time to Love and a Time to Die. (Gaumont.)—Kings Go Forth. (Leicester Square Theatre.) A casebook of a film, it has so few moments of normality that one almost ends by forgetting the other world beyond the closed circle of this one woman's neuroses. Kim Stanley, a robust, Jolly-looking person, more like a hockey queen than a film star, I would have thought, manages to make her own robustness and natural jollity of appearance, her own placid and rather unin- telligent looks, seem far more sinister than those of the conventional-looking loonie; for had she looked hag-ridden, With a thin, startled face and the hysterical pop-eyes of a Bette Davis or a Carolyn Jones, you would have known what to expect. But here you have, a woman rather on the plump side, and on the face of it as healthy and moon-facedly ordinary as you could find, hiding such a depth of horror and loneliness as • makes any happy world seem to crumble. Lone- liness is the film's theme, each person in it living in a kind of padded cell of selfishness, unable even to tap out messages to the next prisoner. The goddess of love, the envy of millions, is not only loveless but unlovable: as circular and hopeless a situation as that of a mouse on a wheel.

Erich Maria Remarque's tale of the crumbling last days of Hitlerism, A Time to Love and a Time to Die (director : Douglas Sirk; 'A' certificate), goes on the principle that the more noise you make, the more warlike it all sounds. Outside an air-raid you never heard such a crashing and banging as the Berlin air-raids make in this film, or felt at the same time less convinced of being in an air-raid, perhaps largely because, no matter how many times she is bombed out, how many fires she scrambles through, the heroine turns up in an immaculately ironed blouse each,time you see her. This is a long, slow, superficial film with such a sonorous tone about it that clearly it means to convince us it has something profound to say. But both its hope and its despair seem trivial, and the images it uses for both (the blossoming tree in winter, the melting corpses in spring, the dying hand clutching for the letter that gives news of a child conceived), though per- fectly legitimate, are somehow made obvious, neat and smug by the neat, obvious, smug tone of the whole film, that seems to think a lot of gore and bright colours and boots in the mud can say the last word about a catastrophe like the last one. The film's one bright spot is the Germans' current favourite, Liselotte Pulver, who for some reason has turned her perfectly pro- nounceable first name into the rubbery-sounding Lilo, and plays the girl whose father is in a con- centration camp with a kind of radiant, indignant hopefulness that really conveys what the blossom- ing tree keeps failing to.

Much better, much more compact and beauti- fully acted is another war film, 'Kings Go Forth (director : Delmar Daves; 'A' certificate), in which war is not the main subject but simply the setting for a conflict between two men on the theme of racialism. It is a simple film, asking the simple question : Which American would marry the girl whose father was a Negro? The conflict is simply resolved, too, between the good guy with the delinquent background (Frank Sinatra) and the bad one with the college background (Tony Curtis), yet somehow, because of the re- markable intelligence of these two men and the restrained, touching performance of Leora Dana as the girl's mother, one accepts the simplicity, the neatness of events and character, the obvious conclusion. All I found hard to accept was the fact that everyone in the film considered Tony Curtis dazzlingly handsome and attractive, and that the whole plot turned on this. But that, I stippose, is one of those old screen conventions, a piece of creaking plot machinery you have to accept, like the fat, middle-aged prima donna you must accept as a girl of fifteen.