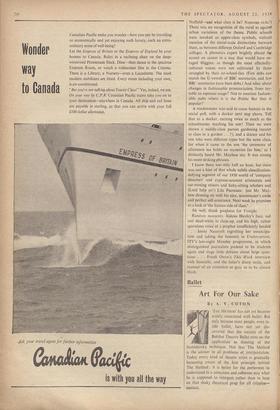 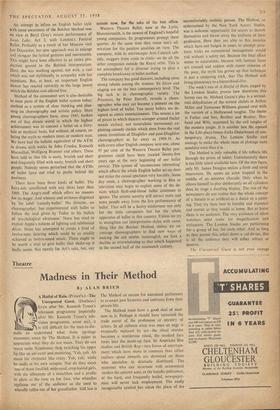 Art For Our Sake

By A. V. COTON 'THE METHOD' has not yet become widely associated with ballet. But only because most people, even in- side ballet, have not yet dis- covered that the success of the Bolshoi Theatre Ballet rests on the application to dancing of the Stanislavsky technique. Not that The Method is the answer to all problems of interpretation. Today every kind of theatre artist is gradually becoming aware of the first principle behind The Method : it is better for the performer to understand in a conscious and coherent way what he is supposed to interpret rather than to lean on that shaky theatrical prop for all cripples— instinct. An attempt to infuse an English ballet style With some awareness of the Bolshoi Method was on view in Beryl Grey's recent performance of Swan Lake, Act 2, with London's Festival Ballet. Probably as a result of her Moscow visit last December, her new approach was to enlarge and elongate the lyrical gestures and movements. This might have been effective in an entire pro- duction geared to the Bolshoi interpretation. Here, she was working against, not with, a cast Which was not stylistically in sympathy with her intentions. But, at least, an important English dancer has reacted correctly to the large lesson Which the Bolshoi visit offered free.

Method of the commoner sort is also desirable in most parts of the English ballet system today; method as a system of clear thinking and plan- ning on choreography and artistic policy. Most Young choreographers have, since 1945, broken out of that dream world in which the highest achievement was to concoct a ballet on a fairy- tale or mythical basis, but without, of course, re- lating the myth to modern times or modern man. We have had the balletic equivalent of the AYM in drama with works by John Cranko, Kenneth Macmillan, Wolfgang Brunner and others. These have told us that life is nasty, brutish and short and frequently filled with nasty, brutish and short People. Nobody seems perturbed that the AYMs of ballet have not tried to probe behind the nastiness.

There have been three kinds of ballet. The fairy-tale unstiffened with any ideas later than 1900. The Angry-stuff which offers no reasons for its Anger. And whimsy and archness disguised by the label 'comedy-ballet.' No director, no choreographer, has experimented with ballet to follow the lead given by Tudor in his ballets of 'psychological aikareness.' None has tried to exploit Appia's notions of lighting and subliminal decor. None has attempted to create a kind of twelve-tone dancing which could be as readily achieved as twelve-toned music. These ought to be worth a trial to give ballet that shake-up it badly needs. Not merely for Art's sake, but, any minute now, for the sake of the box office.

Western Theatre Ballet, now at the Lyric, Hammersmith, is the newest of England's hopeful young companies. Its programmes prompt these queries. At the same time they rouse one's ad- miration for the positive qualities on view. The company, with its microscopic Arts Council sub- sidy, staggers from crisis to crisis—as do all the other companies outside the Royal orbit. This is no atmosphere for a director trying to plan a complete breakaway in ballet method.

The company has good dancers, including some strong talents among the women. Its decor and staging are on the best contemporary level. The big lack is in choreographic variety. The Prisoners, by Peter Darrell, reveals a chore- ographer who may yet become a pioneer on the highest level of ballet. Too many ballets are de- signed as comic entertainments. This means a lot of pieces in which dancers scamper around (ballet mean's stylised, not naturalistic movement) ex- ploiting comedy clichés which stem from the real comic inventions of Diaghilev and post-Diaghilev choreographers as far away as 1909-39. As with every other English company save one, about 95 per cent, of the Western Theatre Ballet pro- grammes could have been created -twenty-five years ago at the very beginning of our ballet revival. This system of 'unconscious inbreeding' which affects the whole English ballet set-up does not strike the casual spectator very forcibly. Some day soon, a choreographer working in film or television may begin to exploit some of the de- vices which flesh-and-blood ballet continues to ignore. The artistic novelty will attract more and more people away from the live performance of ballet. That will be a heavy misfortune not only for the little companies but for the whole apparatus of ballet in this country. Unless we try to strengthen our interpretative styles with some- thing like the Bolshoi Method, unless we en- courage choreographers to find new ways of making the old stories meaningful, we face a decline as overwhelming as that which happened in the second half of the nineteenth century. uncomfortably realistic person. The Method, as systematised by the New York Actors' Studio, was a welcome opportunity for actors to demob themselves and throw away the uniform of their profession. Here they are able to flex muscles which have not bulged in years, to attempt acro- batic tricks no commercial management would risk without a safety net. Because the final effect seems so naturalistic, because rich famous faces are creased and sodden with minor miseries of the poor, the myth has grown up that technique is just a conjuring trick, that The Method will bring democracy to a hierarchical elite.

The week's run of A Hatful of Rain, staged by the London Studio, proves how disastrous this heresy can be. Michael Gazzo's play is a second- rate dehydration of the wettest clichés in Arthur Miller and Tennessee Williams glossed over with the varnish of a Hollywood toughie. The theme is Father and Son, Brother and Brother, Hus- band and Wife, separated by the evil tangles of the modern jungle. It is another box file opened in the Life-plays-funny-tricks Department of con- temporary drama. The London Studio cast manage to make the whole mess of plottage taste mouldier even than it is.

The Method is only valuable if life reflects life through the prism of talent. Unfortunately there is too little talent available here. Of the new faces, only Mr. James Douglas makes a fresh and vivid impression. He seems an actor trapped in the middle of an amateur charade. Only when he allows himself to play deliberately on all cylinders does he stage a dazzling display. The rest of the newcomers do not realise that the whole concept of a theatre is as artificial as a dance or a paint- ing. They try their best to bumble and stammer and mutter as they would at home. But at home there is no audience. The very existence of silent watchers must make for magnification and stylisation. The London Studio are performing for a group of ten, for each .other. And as long as they pursue this safari d6wn a cul-de-sac, this is all the audience they will either attract or deserve.

The Unexpected Guest is not even vintage