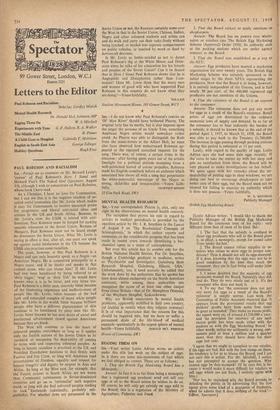 MENTAL HEALTH RESEARCH SIR,—Your correspondent Pharos is, alas, only too

right in his observations on mental health research.

The exception that proves his rule in regard to articles in medical periodicals is provided by the excellent article by Mr. J. R. Smythies in the Lancet of August 9 on 'The Biochemical Concepts of Schizophrenia,' in which the author reports and comments on the considerable progress that has been made in recent years towards identifiying a bio- chemical agent as a cause of schizophrenia.

But even this article has its sombre side for the British National Health Service. For Dr. Smythies, though a Cambridge graduate in medicine, writes as `Psychiatrist and Investigator, Galesburg State Research Hospital, Galesburg, Illinois, USA.' Unfortunately, too, it need scarcely be added that the work done by the authorities that he quotes has been done almost exclusively on the North American continent; while among these authorities one recognises the name of at least one other émigré from Great Britain—that of Dr. Humphrey Osmond, of the Weyburn Hospital, Saskatchewan.

Why are British researchers In mental health problems, apparently stultified in their own country, yet fruitful in results when they migrate overseas? It is of vital importance that the reasons for this should be inquired info, lest we have to suffer a permanent drain of the life-blood of medical research—particularly in the urgent sphere of mental