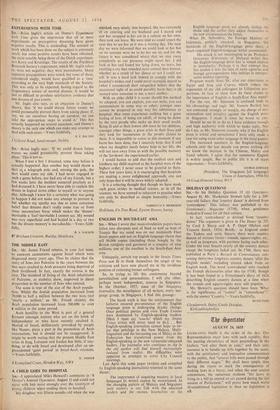 Page 19, 22 August 1958 — SIR, — When I wrote that mass-circulation papers have fallen into disrepute
Close

SIR, — When I wrote that mass-circulation papers have fallen into disrepute

east of Suez as well as west of Temple Bar my mind was on our mammoth Fleet Street papers and not on English-language sheets that sell 90,000 copies (excluding those bought by the British resicjents and garrison) in a country of nine millions, one of the smallest in the South-East Asia area.

Unhappily, certain top people in the Straits Times Press saw fit to think themselves the target of my criticism and have now placed me in the invidious position of criticising former colleagues.

So, in trying to lift this controversy beyond parochialism and personalities, I will cite other, perhaps more independent,, sources in Singapore. In the October, 1957, issue of the Singapore Journalist, the mouthpiece of all writers, every lan- guage group, in Singapore, I find this passage: The harsh truth is that the environment that hitherto ensured pre-eminence of the English language press is undergoing drastic change. Once political parties and even Trade Unions were dominated • by English-speaking leaders. [Here I must say `touche' which my Straits Times critics will never need to do.]. . . But English-speaking journalists cannot hope to en- joy that privilege in the New Malaya. Multi- lingualism and the increasing use of Malay in the Federation has transferred power from the English-speaking to the new vernacular-educated leaders. The journalist who continues to dig in the old garden will find himself increasingly isolated from reality. His difficulties were apparent in attempts to cover City Council meetings. Last April this same paper (written and compiled by English-speaking journalists) returned to the same theme:

The importance of acquiring mastery in local languages [it wrote] cannot be overstressed. In the changing pattern of Malaya and Singapore such mastery is our link with the educated leaders and the masses. Journalists on the

English language press are already feeling the strain and the earlier they adjust themselves to the new circumstances the better.

When Dr. Subandrio, the Foreign Minister of Indonesia, publicly attacked, in Singapore, the standards of the English-language press there, a much-respected English-language writer commented : His attack is not meaningless to us. Professor Overstreet (University of Malaya) writes that the English-language press has 'a vested interest in immaturity.' Perhaps it is that concept that has landed it into the laps of news agencies and foreign corrrespondents who indulge in interpre- tative wishful reporting.

Pregnant words these, Sir, after our experience in Egypt and Iraq and Cyprus, which reduce the arguments of my old colleagues to Lilliputian pro- portions. In face of them how do these claims to the importance of English in South-East Asia stand?

For the rest, Mr. Simmons is confused both in his chronology and logic. Mr. Vernon Bartlett has not contested, strongly or weakly, my charge of sen- sationalism and triviality against the English press in Singapore. I made it since. he wrote to you

Should he see fit to do so I have evidence enough and high authority with which to make reply. Nor do I see, as Mr. Sinimons reasons, why if the English press is trivial and sensational I have only made a case for using some other language in the local papers.

The increased numbers in the English-language schools over the last decade can prove nothing till we know the increase in the Chinese, Malay and Tamil schools. I agree that for commerce English is widely taught. But in public life it is of scant importance.—Yours faithfully,