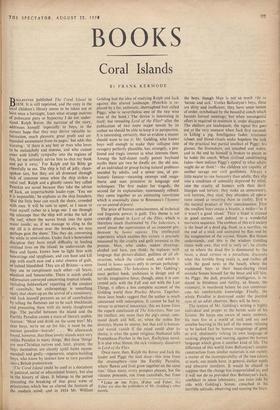 By FRANK KERMODE BALLANTYNE published The Coral Island in 1858. It is still reprinted, and the copy in the local children's library seems to be taken out at least once a fortnight, from what strange motives of pubescent piety or hypocrisy I do not under- stand. Ralph Rover, the narrator of the story, addresses himself 'especially to boys, in the earnest hope that they may derive valuable in- formation, much pleasure, great profit and un- bounded amusement from its pages,' but adds this Warning: 'if there is any boy or man who loves to be melancholy and morose, and who cannot enter with kindly sympathy into the regions of fun, let me seriously advise him to shut my book and put it away.' For Ralph and his Bible go cheerfully to sea. The ship is full of jolly, clean- spoken tars, but they are all drowned through lack of common sense when the ship strikes a coral reef. Ralph and a ghastly comic boy called Peterkin are saved because they take the advice of Jack, an imperturbable leader-type. 'You see it is impossible,' he explains as the ship founders, that the little boat can reach the shore, crowded With men. It will be sure to upset, so I mean to trust myself rather to a large oar. I see through the telescope that the ship will strike the tail of the reef, where the w.aves break into the quiet Water inside; so, if we manage to cling to the oar till it is driven over the breakers, we may Perhaps gain the shore.' This they do, conversing the while in semi-colons. Under Jack's benevolent discipline they have small difficulty in leading civilised lives on the island; he understands the flora and fauna, knows how to light fires with bowstrings and spyglasses, and can hunt and kill pigs with much ease and a total absence of guilt, or indeed bloodshed. They are all Britons—a term they use to compliment each other—all brave, obedient and honourable. There is much useful information conveyed concerning tropical islands, including fieldworkers' reporting of the conduct of cannibals; but anthropology is something nasty that clears up on the arrival of a missionary, and Jack himself prevents an act of cannibalism by telling the flatnoses not to be such blockheads and presenting them with six newly slaughtered pigs. The parallel between the island and the Earthly Paradise causes a trace of literary sophis- tication; 'Meat and drink on the same tree! My dear boys, we're set up for life; it must be the ancient paradise—hurrah! . . . We afterwards found, however, that these lovely islands were very unlike Paradise in many things.' But these 'things' are non-Christian natives and, later, pirates; the boys themselves are cleanly (cold baths recom- mended) and godly—regenerate, empire-building boys, who know by instinct how to turn paradise into a British protectorate.

The Coral island could be used as a document in political, social or educational history, but also in the history of ideas. It belongs to the period preceding the breaking of that great wave of primitivism. which has so altered the features of the modern mind; and in 1954 Mr. William Golding had the idea of studying Ralph and Jack against this altered landscape. (Peterkin is re- placed by a fat, asthmatic, shortsighted butt called Piggy, who is nevertheless one of the two wise men of the book.) The device is interesting in itself; but rereading Lord of the Flies* after the publication of two more major novels by its author we should be able to keep it in perspective. It is interesting, certainly, that so evident a master should want to use it; Mr. Golding, who knows boys well enough to make their collapse into savagery perfectly plausible, has, strangely, a pro- found and tragic interest in what interests them. Among the half-dozen really potent boyhood myths there are two he dwells on; the old one, of an individual or group facing natural problems unaided by adults, and a newer one, of pre- historic fantasy—steaming swamps and mega- theria and men primitive in language and techniques. The first makes for tragedy, the second for its explanation; enormously refined, they come together as an animating conviction which is essentially close to Rousseau's l'honitne est tin animal deprave.

The price of human consciousness, of technical and linguistic power, is guilt. This theme is not centrally placed in Lord of the Flies, which is therefore much illuminated by 7'he Inheritors, a novel about the supersession of an innocent pre- decessor by horn() sapiens. The intellectual superiority which enables this victory is precisely measured by the cruelty and guilt invented in the process. Man, who cooks, makes drawings. alcohol and love, can think; he replaces with language that picture-dialect, guiltless of all ab- straction, which the victim used, and which is found in !unlit, sapiens only in certain pathologi- cal conditions. The Inheritors is Mr. Golding'3 most perfect book, ambitious in design and of terrific imaginative force, though, since it is con- cerned only with the Fall and not with the Last Things, it offers a less complete account of the Golding world than Pincher Martin. Together. these later books suggest that the author is much concerned with redemption. It cannot be had by retreat to primeval innocence: this we know from the superb conclusion of The Inheritors. Nor can the intellect, any more than the pig's snout, com- mand death and hell, or, when the stolen fire destroys, blame its source; but that evil is human. and would vanish if the mind could alter its theme, is what the queer religious Nathaniel tells Prometheus-Pincher in the last; fEschylean novel. It is also what Simon, the sick visionary, discovers in Lord of the Flies.

Once more, then, Ralph the Rover and Jack the leader and Piggy the fool drop—this time from the stratosphere—into the Earthly Paradise, where 'flower and fruit grow together on the same tree.' Once more, every prospect pleases, but the vileness proceeds, not from cannibals, but from

* LORD OF THE FLIES. (Faber and Faber, 5s.) Faber are also the publishers of Mr. Golding's other novels. the boys, -though Man is not so much vile as 'heroic and sick.' Unlike Ballantyne's boys, these are dirty and inefficient; they have some notion of order, symbolised by the beautiful conch which heralds formal meetings; but when uncongenial effort is required to maintain it, order disappears. The shelters are inadequate, the signal fire goes out at the very moment when Jack first succeeds in killing a pig. Intelligence fades; irrational taboos and blood-rituals make hopeless the task of the practical but partial intellect of Piggy; his glasses, the firemakers, are smashed and stolen, and in the end he himself is broken to pieces as he holds the conch. When civilised conditioning fades—how tedious Piggy's appeal to what adults might do or think !—the children are capable of neither savage nor civil gentleness. Always a little nearer to raw humanity than adults, they slip into a condition of animality depraved by mind, into the cruelty of hunters with their devil. liturgies and torture; they make an unnecessary, evil fortress, they steal, they abandon all opera- tions aimed at restoring them to civility. 'Evil is the natural product of their consciousness. First the smallest boys create a beastie, a snake—`as if it wasn't a good island.' Then a beast is created in good earnest, and defined in a wonderful narrative sequence. The emblem of this evil society is the head of a dead pig, fixed, as a sacrifice, on the end of a stick and animated by flies and by the imagination of the voyant, Simon. But Simon understands, and this is the wisdom Golding treats with awe, that evil is 'only us'; he climbs up to where the dead fire is dominated by the beast, a dead airman in a parachute, discovers what this terrible thing really is, and rushes off with the good news to the beach, where the maddened boys at their beast-slaying ritual mistake Simon himself for the beast and kill him. As Piggy, the dull, practical intelligence, is re- duced to blindness and futility, so Simon, the visionary, is murdered before he can communi- cate his comfortable knowledge. Finally, the whole Paradise is destroyed under the puzzled eyes of an adult observer. Boys will be boys.

The texture of Mr. Golding's writing is highly individual and proper to the heroic scale of his fictions. He keeps one aware of many contexts, his men live in a world of rock and sea and amoebte heaving in the pull of the moon, refusing to be locked fast by human imaginings of good or evil, obstinately talking its own language of sucking, plopping and roaring, against the human language which gives it another kind of life. The difference of this world from Ballantyne's simpler construction from similar materials is not merely a matter of the incomparability of the two talents at work; our minds have, in general, darker needs and obscurer comforts. It would be absurd :o suppose that the change has impoverished us; and it will not do so provided that.Ballantyne's Jack, confident in some laboratory, can exist side by side with. Golding's Simon, crouched in his horrible solitude, observing and naming the beast.