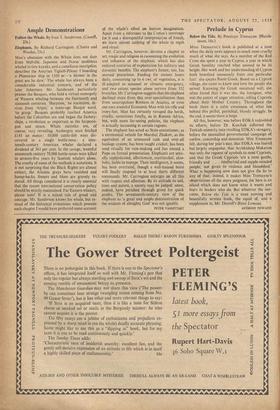 MISS TREMAYNE'S book is published at a time when the daily news appears to mock most cruelly much of what she says. As a member of the Red Cross she spent a year in Cyprus, a year in which Greek hostility reached what seemed to be its height. Her work and her understanding of Cyprus both benefited immensely from one particular fact : she speaks fluent Greek. Based on a Cypriot village, she came to know and love the people she served. Knowing the Greek mainland well, she often found that it was she, the foreigner, who was the centre of eager attention, telling Cypriots about their Mother Country. Throughout the book there is a calm awareness of what lies behind this pitiful, parochial, bloody struggle. In the end, it seems there is hope.

All this, however, was before EOKA redoubled its efforts, before Dr. Kutchuk inflamed the Turkish minority into rivalling EOKA's savagery, before the intensified governmental campaign of curfew, censorship and detention. Miss Tremayne . felt, during her year's stay, that EOKA was feared but largely unpopular, that Archbishop Makarios was only the vaguest of symbols to most Cypriots, and that the Greek Cypriots 'are a most gentle, friendly and . . . intellectual and supple-minded people; not given to violence and bloodshed.' What is happening now does not give the lie to any of that; indeed, it makes Miss Tremayne's observations all the more poignant, for here is an island which does not know what it wants and fears its leaders who do. But whatever the out- come, Below the Tide is a most moving and beautifully written book, the equal of, and a supplement to, Mr. Durrell's Bitter Lemons.