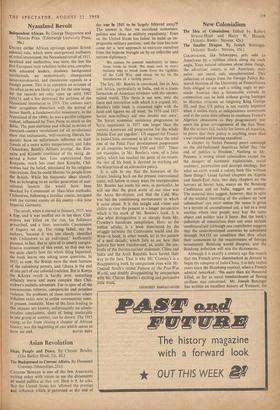 UNLIKE earlier African uprisings against British colonial rule, which were unorganised outbursts of tribal resentment, the Nyasaland revolt of 1915, localised and ineffective, was none the less the first European-style rebellion in the area, complete With educated leaders, shadowy background intellectuals, an economically disorganised lumpenproletariat, and clandestine appeals to a foreign power. This is as complete an account of the affair as we are likely to get for the time being, for the records are only open up until 1902 (why?), and a fire destroyed the archives of the Nyasaland Secretariat in 1919. The authors start their scrupulous dissection with the arrival of James Booth, a fundamentalist missionary, in the Nyasaland of the 1890s; he was a pacifist religious radical, influenced by Tom Paine as much as the Bible. The post-mortems and official re-writes of twentieth-century revolutions (of all revolutions) show that enthusiastic, well-meaning liberals fre- quently have an unfortunate influence on their friends of a more active temperament, and John Chilembwe, Booth's African protege, the Ken- yatta and Kimathi combined of the rising, de- served a better fate. Less sophisticated than Kenyatta, much less cruel than Kimathi, Chil- embwe had the belief, stimulated by his religious convictions, that he could liberate his people from the British. While his theocratic ideas identify him as belonging to an earlier generation of anti- Colonial leaders (he would have been Shocked by Communist or Mau-Mau methods), Chilembwe, following a familiar course, intrigued With the current enemy of his enemy—this time Imperial Germany.

The revolt, when it started in January, 1915, was a flop, and it was snuffed out in ten days. Chil- embwe was killed on the run, his followers proscribed, and a later, inevitable Commission of Inquiry set up. The rising failed, say the authors, 'because it was too closely identified With Chilembwe as an individual.' Inefficiently planned, in fact. But, in spite of its utterly compre- hensive treatment of this event, so that one can see quite clearly how the whole thing happened, the book leaves one asking some questions. In 1915, as now, the British were the most humane of the colonising powers, and Ghana is the end of one part of our colonial tradition. But in Kenya the Kikuyu revolt is hardly over, something infinitely worse and more complex than Chil- embwe's pathetic adventure. For in spite of all the commissions, reforms, conspiracies and pointless violence, the problems of those territories where tribalism exists next to settler communities seem, at present, insoluble. Most of the facts leading to this impasse are known; unfortunately no admin- istrative conclusions, short of being intolerable to one group or another, can be drawn. The 1915 rising, so far from closing a chapter of African history, was the beginning of one which seems to