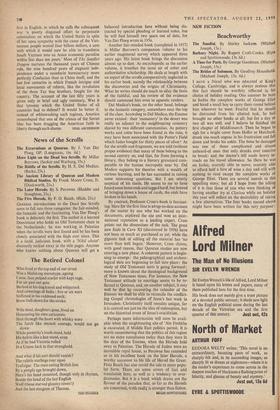 News of the Scrolls

The Excavations at Qumran. By J. Van Der Ploeg, OP. (Longmans, 16s. 6d.) The Riddle of the Scrolls. By H. E. Del Medico. (Burke, 25s.) The Ancient Library of Qumran and Modern Biblical Studies. By Frank Moore Cross, Jr. (Duckworth, 21s.) The Five Herods. By F. 0. Busch. (Hale, 21S.) GENERAL introductions to the Dead Sea Scrolls seem to fall into three categories; the fair-minded, the fantastic and the fascinating. Van Der Ploeg's book is definitely the first. The author is a learned Dominican who holds an Old Testament chair in the Netherlands: he was working in Palestine when the scrolls were first found and he has been closely associated with the finds ever since. This is a lucid, judicious book, with a Wihil obstat' discreetly tucked away in the title pages. Anyone who knows nothing about Qumran will get It balanced introduction here without being dis- tracted by special pleading or learned notes, but he will find himself two years out of date, for Van Der Ploeg wrote in 1956.

Another fair-minded book (completed in 1957) is Millar Burrows's companion volume to his earlier magisterial survey which appeared three years ago. His latest book brings the discussion almost up to date. As encyclopmdic as the earlier volume, it breathes the same air of sober and authoritative scholarship. He deals at length with an aspect of the scrolls.comparatively neglected in his earlier book, namely the relationship between the discoveries and the origins of Christianity. What he writes should do much to allay the fears of the faithful, and his review of the evidence should commend him even to agnostic readers.

Del Medico's book, on the other hand, belongs to the fantastic category, somewhere near the top of the class. According to Del Medico, the Essenes never existed : their `monastery' in the desert was really an adjunct to the neighbouring cemetery shared by two different communities. As pottery works and coins have been found in the ruin, it may have been associated with the Potter's Field which Judas bought for thirty pieces of silver! As for the scrolls and fragments, we are told (without proper evidence) that many of these belong to the second century AD, and that, far from forming a library, they belong to a literary graveyard com- parable to the human necropolis near by. Del Medico supports his theories with a wealth of curious learning, and he has succeeded in raising some interesting questions. But I am utterly sceptical of his thesis. He seems to me to have found some loose ends and tugged hard; but instead of bringing down a house of cards, the ends have broken in his hands.

By contrast, Professor-Cross's-book is fascinat- ing. Here for the first time is an-up-to-date account of the matter by one who has worked on the documents, explored the site and won an inter- national reputation as a. leading expert. Cross points out the dimensions of the task. The great new finds in Cave XI (discovered in 1956) have not been so much as purchased as yet, while the gigantic task of editing all the material has `no more than well begun.' However, Cross claims, with good reason, that Qumran studies are now entering a new phase. A coherent pattern is begin- ning to emerge: the paleographical and archeo- logical data are beginning to fall into place: the study of Old Testament texts is going forward : more is known about the theological background of New Testament times. For instance, the New Testament attitude to marriage seems to be re- flected at Qumran, and, on another subject, it may well be that by recovering the calendar of the Essenes we shall be able to reconcile the conflict- ing Gospel chronologies of Jesus's last week in Jerusalem. Christianity itself remains unique, for it is centred not just on the idea of redemption, but on the historical event of Jesus's crucifixion.

Perhaps more information will soon be avail- able when the neighbouring site of 'Ain FeshIcha is excavated, if Middle East politics permit. It is worth remembering that the politics of this region are no more tumultuous today than they were in the days of the Essenes, when the Herods held sway in Palestine. The Herods of ludwa were an incredible royal house, as Perowne has reminded us in his excellent book on the later Herods, a Worthy successor to his life of Herod the Great. Fritz Busch has also retold the tale in more popu- lar form. There are some errors of fact and translation here, as well as a tendency to over- dramatise. But it is a book which draws out the flavour of the paradox that, so far as the Herods are concerned, truth really is stranger than fiction.