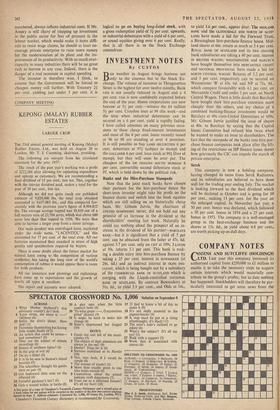 BAD weather in August brings business not only to the cinemas but to the Stock Ex- change. The volume of turnover in Throgmorton Street is the highest for over twelve months, Bank rate is not usually reduced in August and a 4 per cent, rate is now confidently expected before the end of the year. Home corporations can now borrow at 54- per cent.—witness the £4 million 5+ per cent. Croydon loan at 99 this week—and the time when industrial debentures can be secured on a 6 per cent, yield is rapidly fading. I have called attention on many previous occa- sions to these cheap fixed-interest investments and most of the 6 per cent, loans recently issued at 96 to 98 are standing at over 4 premium. It is still possible to buy LAND SECURITIES 6 per cent. debenture at 97+ (subject to stamp) and the GALLAHER 6 per cent, loan stock'at 991 (free of stamp), but they will soon be over par. The cheapest of the lot remains soum DURHAM 6 per cent, convertible second debenture stock at 97, which is held down by the political risk.

Banks and the Hire-Purchase Stampede

Now that the joint stock banks have chosen their partners for the hire-purchase dance the short-term investor might take his profit on the finance shares and switch into the bank equities which are still selling on an historically cheap basis. Mr. Gibson Jarvie, the chairman of UNITED DOMINIONS TRUST, did not hold out any promise of an increase in the dividend at the shareholders' meeting last week. Naturally he could say nothing about the prospect of an in- crease in the dividend of his partner—BARCLAYS BANK—but it is significant that a yield of 5 per cent. can be obtained from the latter at 47s. 6d. against 3.7 per cent, only on UDT at 109s. LLOYDS at 50s. returns 5.1 per cent. This bank is mak- ing a double entry into hire-purchase finance by taking a 25 per cent. interest in BOWMAKER (at 29s. 6d.) and an indirect interest in oLns DIS- COUNT, which is being bought out by a subsidiary of the COMMERCIAL BANK OF SCOTLAND Which is merging with the Lloyds-controlled NATIONAL BANK OF SCOTLAND. By contrast Bowmakers at 34s. 6d., to yield 3.9 per cent., and Olds at 34s., to yield 3.6 per cent., appear dear. The MIDLAND BANK and the CLYDESDALE AND NORTH OF SCOT- LAND have made a bid for the Forward Trust, a Birmingham hire-purchase finance house. Mid- land shares at 66s. return as much as 5.4 per cent. ROYAL BANK OF SCOTLAND and its two clearing bank subsidiaries are taking a 40 per cent, interest in BRITISH WAGON; WESTMINSTER and MARTIN'S have bought themselves into MERCANTILE CREDIT and NATIONAL PROVINCIAL have made a bid for NORTH CENTRAL WAGON. Returns of 5.2 per cent. and 5 per cent, respectively can be secured on Westminster 11' at 43s. 6d. and NP at 71s. 9d., which compare favourably with 4.1 per cent. on Mercantile Credit and under 3 per cent. on North Central Wagon. There is little doubt that Barclays have bought their hire-purchase extension more cheaply than the others, and my choice of a combined banking-finance investment would be Barclays at 49s.-cum-United Dominions at 109s. Mr. Gibson Jarvie justified the issue of shares at 80s. to Barclays by saying that the Capital Issues Committee had refused him twice when he wanted to make an issue to shareholders. The fact that the stampede of the banks into hire-pur- chase finance companies took place after the lift- ing of the restrictions on HP finance issues shows how grievously the CIC can impede the march of private enterprise.

This company is now a holding company, having changed its name from Serck Radiators, and its subsidiaries are believed to have done well for the trading year ending July. The market is looking forward to the final dividend which will be declared in October and is going for 10 per cent., making 15 per cent. for the year on the enlarged capital. In November last year a 50 per cent. bonus was declared, which followed a 50 per cent, bonus in 1954 and a 25 per cent. bonus in 1953. The company is a Well-managed group in the heat-exchange business and the shares at 15s. 6d., to yield about 4.8 per cent., are worth picking up on dull days.