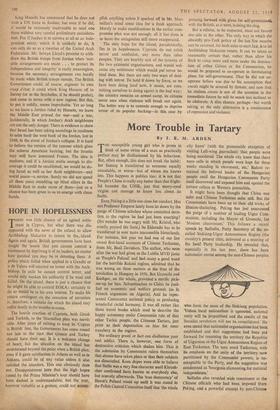 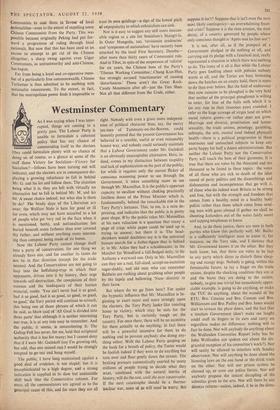 By J. E. M. ARDEN THE susceptible young girl who is prone to think of some swine of a man as practically perfect may be disillusioned by his behaviour. But, often enough, this does not break the habit: her fantasy is transferred to someone equally unsuitable, or worse—but of whom she knows less. This happens in politics too: it is not that People's China is really any better than that fright- ful bounder the USSR, just that starry-eyed virgins can manage to know less about its faults.

Even Peking is a little too close for comfort. Has not Professor Empson lately been let down by the purge of Chinese scholars whose contented devo- tion to the regime he had just been asserting? (No wonder he was angry with Mr. ICristol, who cruelly printed the facts.) So Eldorado has to be transferred to ever more inaccessible hinterlands. For instance, last year we had one of our few recent first-hand accounts of Chinese Turkestan, from Mr. Basil Davidson. The author, who soon after the war had given us the Lublin MVD junta as 'People's Poland' and had many a good word for the horrible Rakosi regime, admitted that he was wrong on these matters at the time of the revolution in Hungary in 1956. But Urumchi and Kashgar, on the whole, provided a terrific pick- me-up for him. Subordination to China he justi- fied on economic and welfare grounds (as in French arguments on Algeria). And he repre- sented Communist national policy as producing wonderful racial harmony. It was all rather like those travel books which used to describe the happy autonomy under Communist rule of that other Turkic people, the Crimean Tartars, just prior to their deportation en bloc for mass treachery to the regime.

No ordinary proof or fact can disillusion your real addict. There is, however, one form of destructive criticism which shakes him. That is the admission by Communist rulers themselves that abuses have taken place or that their subjects are dissatisfied. Keen dupes were able to believe that Stalin was a very fine character until Khrush- chev confirmed facts known to everybody else, but scarcely afterwards. The 'true democracy' of Bierut's Poland stood up until it was stated in the Polish Central Committee itself that 'the whole city knew' (with the presumable exception of visiting Left-wing journalists) 'that people were being murdered. The whole city knew that there were cells in which people were kept for three weeks standing in excrement, etc.' Rakosi re- mained the beloved leader of the Hungarian people until the Hungarian Communist Party itself disavowed and exposed him and opened the torture cellars to Western journalists.

It might have been thought that China was safer and Chinese Turkestan safer still. But the Communists have been up to their old tricks of illusion-shattering. Peking has just announced the purge of a number of leading Uigur Com- munists, including the Mayor of Urumchi, for 'Moslem chauvinism.' This follows a recent speech by Saifudin, Party Secretary of the so- called Sinkiang-Uigur Autonomous Region (the country's present title), delivered at a meeting of the local Party leadership. He revealed that, especially in the last year, there has been nationalist unrest among the non-Chinese peoples who form the mass of the Sinkiang population. 'Unless local nationalism is uprooted, national unity will be jeopardised and the results of the Socialist revolution will not be consolidated.' He even stated that nationalist organisations had been established and that suggestions had been put forward for renaming the territory the Republic of Uigurstan or the Uigur Autonomous Region of East Turkestan. The very word Turkestan, with its emphasis on the unity of the territory now partitioned by the Communist powers, is un- acceptable to the Party, and the suggestion was condemned as 'bourgeois clamouring for national independence.'

Saifudin also revealed wide resentment at the Chinese officials who had been imposed from Peking, and a powerful attempt by non-Chinese Communists to oust them in favour of local nationalities—even to the extent of expelling some Chinese Communists from the Party. This was Possible because originally Peking had put for- ward a programme of ruling through local nationals. But now that this has been used as an excuse to attempt to get rid of the Chinese altogether, a sharp swing against even Uigur Communists, as untrustworthy and anti-Chinese, has begun.

Far from being a loyal and co-operative mem- ber of a particularly free commonwealth, Chinese Turkestan is thus admitted to be seething with nationalist resentments. To the extent, in fact, that the metropolitan power finds it impossible to trust its own quislings—a sign of the lowest pitch of unpopularity to which colonialism can sink.

Nor is it easy to suggest any still more inacces- sible region as a site for Socialism's Shangri-la. In Outer Mongolia, too, 'revisionist tendencies' and 'symptoms of nationalism' have recently been attacked by the local First Secretary, Damba- after more than thirty years of Communist rule. And in Tibet, in spite of the suspension of `reform' for six years, the Chinese boss of the Party's 'Tibetan Working Committee,' Chang Kuo-Hua, has strongly accused 'reactionaries' of causing 'disturbances.' Those aren't the Great Rock- Candy Mountains after all—just the Tien Shan. Not all that different from the Urals, either.