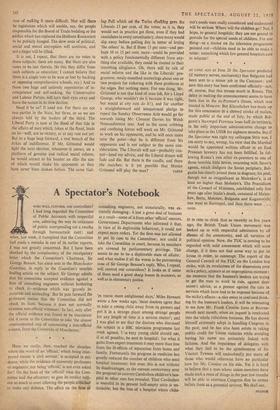 Have we really, then, reached the situation where the word

of an 'official,' which being inter- preted means 'a civil servant,' is accepted in evi- dence, while the evidence of university professors or engineers, not being 'official,' is not even asked for? On the basis of the 'official' view the Com- mittee had the effrontery to give its verdict with- out so much as even allowing the people criticised to make any defence. The effect on the firm of consulting engineers, not unnaturally, was ex- tremely damaging: it lost a great deal of business as a result—some of it from other 'official' sources, Government Departments who informed it that, in view of Its deplorable behaviour, it could not expect more orders. Yet the firm was not allowed to put its case to the Committee: nor could it take the Committee to court, because its members are covered by parliamentary privilege. This seems to me to be a deplorable state of affairs: and what makes it all the worse is the patronising tone of Sir George Benson's reply. Who, I repeat, will control our controllers? It looks as if some of them need a good sharp lesson in manners, as well as in elementary justice.