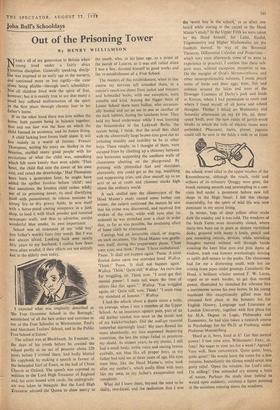 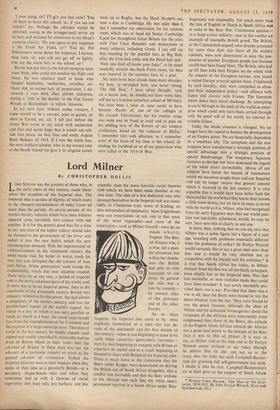 Out of the Prisoning Tower

By HENRY WILLIAMSON NEARLY all of my generation in Britain when young lived under a fairly strict Victorian discipline. Generally speaking, discip- line was imposed at an early age in the nursery, and continued more or less rigidly—the cane alone being pliable—through one's schooldays. Not all children lived with the spirit of fear, however; but it is mainly true to say that many a 'small boy suffered malformation of the spirit ftl the first place through chronic fear in his father's home.

If on the other hand there was love within the ome, both parents being in balance together, that and not fear was the base on which the Child formed its existence, and its future living.

A child lacking love forms itself alone. It will live mainly in a world of fantasy. Francis Thompson, writing his essay on Shelley in the Nineties, startled many good people with his revelations of what the child was, something yvhich felt more keenly than even adults. 'Thus beset, the child fled into the tower of his own soul, and raised the drawbridge.' Had Thompson been born a generation later, he might have added the epithet loveless before `child'; and that sometimes the loveless child rushes wildly out of its prisoning tower, to steal (fortifying itself with possessions); to release tensions by Setting fire to dry grassy fields; to arm itself with a horse-pistol costing ninepence in a junk Shop, to load it with black powder and rammed newspaper wads, an& thus to advertise, amidst wonderful blue smoke, its own importance.

School was an extension of my 'wild boy' flly father's words) fears (my word). But I was not always afraid. Looking back over nearly fifty years to my boyhood, I realise how fears were often evaded, if their effects are not entirely lost in the elderly man today.

I attended what was originally described as 'the Free Grammar School in the Borough,' established 'of all the best orders and exercises in use at the Free Schooles at Westminster, Paul's and Merchant Taylors' School, and in the Public Free School at Eaton.'

The school was at Blackheath. Its Founder, in the days of his youth before he created the School partly as an act of penance about 320 Years before I arrived there, had badly blotted his copybook by making a speech in favour of the beheaded Earl of Essex, in the hall of Christ Church at Oxford. The speech was reported as sedition to the Lord High Treasurer of England and, his arms bound with cords, the undergradu- ate was taken to Newgate. But the Lord High .Treasurer advised the Queen to show mercy to the youth, who, in his later age, as a priest of the parish of Looem, as it was still called when I was a boy, devoted himself to good works and the re-establishment of a Free School.

The masters of this establishment, when in due course my nervous self attended there, in a cousin's reach-me-down Eton jacket and trousers and hobnailed boots, with one exception, were amiable and kind. Among the bigger boys of Lower School there were bullies, who occasion- ally hunted and sat on me in one or another of the dark lobbies, during the luncheon hour. They held my head underwater while I was learning the breaststroke in the Ladywell Baths, the reason being, I think, that the small thin child with the abnormally large brown eyes gave out an irritating timidity and inability to be as other boys. These roughs, as I thought of them, were escaped from by climbing up a chimney between two buttresses supporting the southern walls of classrooms abutting on the playground. By pressing with plimsolled feet and shoulders alternately, one could get to the top, trembling and suppressing cries, and claw oneself up to an acre or so of roofs and chimney stacks high above the ordinary world.

A sack stuffed into the chimneypot of the Head Master's study caused some bother one winter; the culprit confessed the instant he saw that his crime was discovered, and received five strokes of the cane, while with eyes shut (as ordered) he was stretched over a chair in order that, as far as was possible, the insulating effect of loose cloth be eliminated.

Canings had an invariable ritual, or dogma, on such occasions. The Head Master was gentle- ness itself, during this preparatory phase. 'Close your eyes; and think.' Pause. 'I have misbehaved.' Pause. 'It shall not happen again.' Pause. A smut floated down upon one extended hand. Wallop. 'Think!' Pause. 'It shall not happen again.' Wallop. 'Think ! Quite still.' Wallop. 'An extra one for wriggling, sir. Think now. "I must get that mental power! 1 must not waste the time of others like this again."' Wallop. 'You wriggled again, sir! Quite still, now. Think! "I must raise my standard of honour."' Wallop.

I had the whack about a dozen times a term, on average, when I was a member of the Upper School. As an insurance against pain, part of an old leather satchel was sewn to the inside seat of my knickerbockers. Did the wallops resound somewhat alarmingly loud? My tears flowed the more abundantly, my face expressed despairing contrition, the less the stings failed to penetrate my shield. At sixteen years, to my shame, I still had a small body, treble voice and staring brown eyeballs, not blue like all proper boys, as my father had told me at three years of age. His eyes were blue, like the Head Master's, mine took after my mother's, which easily filled with tears like my own, to my father's exasperation and complaint.

What did I learn there, beyond the need to be shifty, two-faced, and the realisation that I was the 'worst boy in the school,' as so often one heard while staring at the carpet in the Head Master's study? In the Upper Fifth we were taken by the Head himself, for Latin, Euclid, Trigonometry and Higher Mathematics (or the foothills thereof, by way of the Binomial Theorem, Differential Calculus and Projectiles— which very soon afterwards some of us were to . experience in practice). I confess that these sub- jects were, without exception, mysteries to me. On the margins of Ovid's Metamorpho.se,%, and other incomprehensible volumes, I made pencil notes of birds and their eggs, trees, fish and animals around the lakes and trees of the Dowager Countess of Derby's park and lands at Keston, where I had permission to roam and where I freed myself of all home and school thoughts. Thither 1 biked on Wednesday and Saturday afternoons on my £4 19s. 6d. three- speed Swift, over the new roads of jarrah-wood blocks in which the rails of electric trams were embedded. Pheasants, hares, plover, pigeons could still be seen in the fields a mile or so from • the school; trout idled in the upper reaches of the Ravensbourne, although the roach, rudd and willows of its tributary Quaggy were gone, the brook running smooth and unwimpling in a con- crete bed under a pavement before new tall shops in the High Street. I felt this change mournfully, for the spirit of wild life was now dominant in my secret living.

In winter, fogs of deep yellow often made dark the midday and it was cold. The windows of the Sixth Form were invariably closed, where thirty-two boys sat in pairs at sixteen varnished desks, grooved with many a knife, pencil and pen recording initials, devices, while unending thoughts moved without will through head& avoiding the keen blue eyes and pink dome of wisdom, truth and honour everlastingly striving to uplift dull nature to the peaks. The classroom had for me a distressing smell, with hot air arising from pipes under gratings. Ceaselessly the Head, a brilliant scholar named F. W. Lucas, urged us to work harder, to get that mental power, illustrated by clenched fist vibrated like a metronome across his own brows. In his young manhood this exceptionally gifted man had obtained first place in the honours list for English History, Language and Literature at London University, together with first place for his M.A. Degree in Logic, Philosophy and Economics; he had also taken a research course in Psychology for his Ph.D. at Freiburg, under Professor Munsterberg.

'Hard at it, boys, hard at it! Get that mental power! I saw your eyes, Williamson! Foxy, sir, foxy! No sugar in your tea for a week? Agreed? Very well. Now concentrate. Quite quiet, boys, quite quiet!' He would leave the room for a few minutes. Immediately the silence would erupt into gusty relief. 'Open the window, for God's sake. I'm stiffing!' One unheeded cry among a buzz of voices. Perhaps the study door behind us would open suddenly, catching a figure pointing at the moisture running down the windows. 'Come along, sir!' I'll gi'e you that cane'! You yin have to leave this school; sir, if you are not areful!' etc. Perhaps the offender would be eprieved, owing to the (exaggerated) terror on us face, and sentence be commuted to the Head's avourite charity. `Do you agree to pay tuppence a the Fresh Air Fund, sir? You do. Put /Villiamson's name down for tuppence, Latymer. sIext time, sir, you will not get off so lightly. You are the worst boy in the school, sir!'

But he was not always the falcon stooping upon :esser birds, who could not emulate his flight and vision. I-ie was courtesy itself to those who lleaded headaches, toothaches, earaches, etc. Many did, to excuse lack of preparation. I dis- :overed, a rare bird, then almost unknown, during a 'visit to the dentist' in the Fox Grove Woods at Beckenham—a willow titmouse.

In my own eyes, without undue concern, I knew myself to be a coward, poor at games, an idiot at Euclid, etc. etc. I left just before the Great War arose in my mind with excitement and fear and secret hope that it would not sub- side into peace, on that blue and sunlit August Bank Holiday of 1914. If I was the worst boy, the most brilliant scholar, who in my second year at the Heath School (to give it its original name) went on to Rugby, was the Head Master's son, now a don at Cambridge. He was older than but. I remember my admiration for his achieve- ment, which was to head the Senior Cambridge Local list throughout Great Britain for the year, with First Class Honours and distinctions in many subjects, including Greek. I can still see him standing by the parallel bars in Big Hall, after the Lists had come and the Head had said: 'Now you shall all know your fates!' as he stood modestly outside the-Sixth Form room, his blue eyes lowered in the sensitive face of a poet.

My tears have been clouds these many decades; my hate, or -strangled love, was never strong. The Old Bird,' I have often thought, took on a heroic task; he should not have worn him- self out in a London suburban school of 300 boys, but have been a tutor at, soon surely to have become Master of, one of the colleges at the ancient Universities; for his mental range was wide and he lived to instil and to pass on his abiding love of the flowers of our western civilisation, based on 'the radiance of Hellas.' 1 remember him with affection, as I remember most of the faces of my time at the school, in- cluding the hundred or so of my generation who were killed in the 1914-18 War.