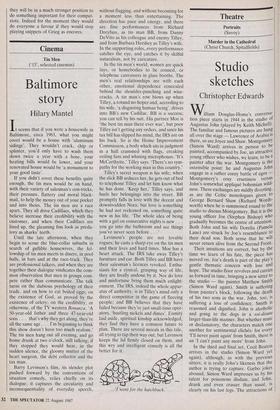 t seems that if you were a housewife in I Baltimore, circa 1963, what you might covet would be a house with 'aluminum sidings'. They wouldn't crack, chip or splinter, you'd only have to wash them down twice a year with a hose, your heating bills would be lower, and your renovated house would be 'a monument to your good taste'.

If you didn't covet these benefits quite enough, the tin men would be on hand, with their variety of salesman's con-tricks, their pressure, flattery and moral black- mail, to help the money out of your pocket and into theirs. The tin men are a race apart. They all drive Cadillacs, which they believe increase their credibility with the customer, and when their Cadillacs are lined up, the gleaming fins look as preda- tory as sharks' teeth.

Until the late afternoon, when they begin to scour the blue-collar suburbs in search of gullible housewives, the fel- lowship of tin men meets in diners, in pool halls, in bars and at the race-track. They are professional talkers, and when they are together their dialogue vindicates the com- mon observation that men in groups com- pete rather than communicate. The talk turns on the dubious psychology of their trade, and on how to eat boiled eggs; on the existence of God, as proved by the existence of celery; on the credibility, or otherwise, of the TV western Bonanza. 'A 50-year-old father and three 47-year-old sons . . . that's why they get along, they're all the same age . . . I'm beginning to think this show doesn't have too much realism.' The tin men hang out all evening, and go home drunk at two o'clock, still talking; if they stopped they would hear, in the sudden silence, the gloomy mutter of the heart surgeon, the debt collector and the tax man.

Barry Levinson's film, its slender plot pushed forward by the conventions of situation comedy, relies chiefly on its dialogue; it captures the circularity and inconsequentiality of everyday speech, without flagging, and without becoming for a moment less than entertaining. The direction has pace and energy, and there are fine performances from Richard Dreyfuss, as tin man BB, from Danny DeVito as his colleague and enemy Tilley, and from Barbara Hershey as Tilley's wife. In the supporting roles, every performance catches the eye, and catches it by skilful naturalism, not by caricature.

In the tin men's world, women are quick lays, or homebodies to be conned, or telephone canvassers in glass booths. The men's real relationships are with each other, emotional dependence concealed behind the shoulder-punching and wise- cracks. A tin man's row blows up when Tilley, a rotund no-hoper and, according to his wife, 'a disgusting human being', drives into BB's new Cadillac. BB is a success; you can tell by his suit. His partner Moe is 'the best tin man there ever was', but poor Tilley isn't getting any orders, and since his tax bill has slipped his mind, the IRS are on his back. So is the Home Improvement Commission, a body which sits in judgment in a hall crammed with flags, creaking ceiling fans and whining microphones. 'It's McCarthyite,' Tilley says. 'There's no sym- pathy for the working man in this country.'

Tilley's secret weapon is his wife; when the slick BB seduces her, he gets out of bed to telephone Tilley and let him know what he has done. 'Keep her,' Tilley says, and hurls her belongings into the street. BB promptly falls in love with the decent and downtrodden Nora; but love is something he had not reckoned on, something quite new in his life. 'The whole idea of being with a girl on consecutive nights is new . . you go into the bathroom and see things you've never seen before . .

Levinson's people are not lovable rogues; he casts a sharp eye on the tin men and their lives and hard times. Moe has a heart attack. The IRS take away Tilley's furniture and car. Both Tilley and BB have their salesman's licences revoked. Enthu- siasts for a cynical, grasping way of life, they are finally undone by it. Nor do love and misfortune bring them much enlight- enment. The IRS, indeed the whole appar- atus of authority, is in Tilley's mind only a direct competitor in the game of fleecing people; and BB believes that they have failed because they're just small-time oper- ators, 'hustling nickels and dimes'. Enmity laid aside, spiritual kinship acknowledged, they find they have a common future to plan. There are several morals in this tale, all trying to tap their way out; but Levinson keeps the lid firmly closed on them, and this wry and intelligent comedy is all the better for it.

'1 went for the hatchback.'