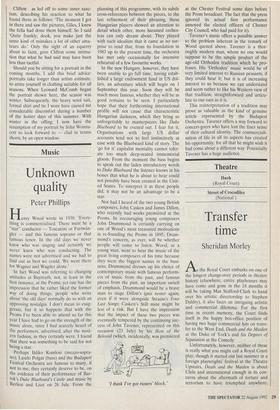 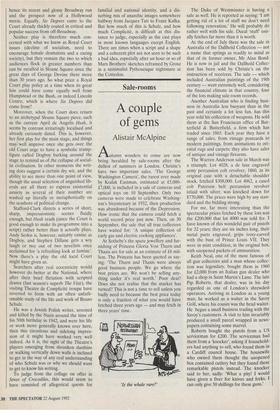 Athe Royal Court embarks on one of the longest change-over periods in theatre history (elsewhere, entire playhouses may have come and gone in the 18 months it will be taking Max Stafford-Clark to hand over his artistic directorship to Stephen Daldry), it also faces an intriguing artistic and commercial dilemma. For the first time in recent memory, the Court finds itself in the happy box-office position of having two huge commercial hits on trans- fer to the West End, Death and the Maiden at the Duke of York's and Six Degrees of Separation at the Comedy.

Unfortunately, however, neither of these is really what you might call a Royal Court play; though it started out last summer in a foreign playwrights' festival at the Theatre Upstairs, Death and the Maiden is about Chile and international enough in its con- cerns about the aftermath of torture and terrorism to have triumphed anywhere, hence its recent and glossy Broadway run and the prospect now of a Hollywood movie. Equally, Six Degrees came to the Court already thickly coated in critical and popular success from off-Broadway.

Neither play is therefore much con- cerned with what we know as Royal Court issues (decline of socialism, need to encourage female dramatists and a caring society), but they remain the two to which audiences flock in greater numbers than can be recalled in Sloane Square since the great days of George Devine there more than 30 years ago. So what price a Royal Court play policy at a time when its great hits could have come equally well from Hampstead or the Bush, or indeed Lincoln Centre, which is where Six Degrees did come from?

Moreover, when the Court does return to an archetypal Sloane Square piece, such as the current April de Angelis Hush, it seems by contrast irritatingly localised and already curiously dated. This is, however, her first play for the main stage, and things may well improve once she gets over the old Court urge to have a symbolic tramp- figure called Dogboy barking around the stage to remind us of the collapse of social- ist civilisation. In other moments the writ- ing does suggest a certain dry wit, and the ability to see more than one point of view, though the usual selection of anguished lib- erals are all there to express existential anxiety as several of their number are washed up literally or metaphorically on the seashore of political change.

Stafford-Clark directs a series of short, sharp, impressionistic scenes fluidly enough, but Hush reads (since the Court is good enough to make its programme into a script) rather better than it actually plays. Andy Serkis is, however, suitably canine as Dogboy, and Stephen Dillane gets a wry laugh or two out of two novelists once acclaimed for 'a refreshing look at famine'. Now there's a play the old local Court might have given us.

Searchers after real eccentricity would however do better at the National, where after their brief flirtation with scripted drama (last season's superb The Visit), the visiting Theatre de Complicite troupe have reverted to form with an often unfath- omable study of the life and work of Bruno Schulz.

He was a Jewish Polish writer, arrested and killed by the Nazis around the time of his 50th birthday in 1942, and were his life or work more generally known over here, then this circuitous and sidelong impres- sion of it might have worked very well indeed. As it is, the sight of the Theatre's players emerging from shrunken dustbins or walking vertically down walls is inclined to get in the way of any real understanding of who Schulz was or why we should want to get to know his writing.

To judge from the collage on offer in Street of Crocodiles, this would seem to have consisted of allegorical quests for familial and national identity, and a dis- turbing mix of anarchic images somewhere halfway from. Jacques Tati to Franz Kafka. But how much of this is Schulz, and how much Complicit& is difficult at this dis- tance to judge, especially as the cast plays in most known languages except English. There are times when a script and a shape and a coherent plot are not seen to be such a bad idea, especially after an hour or so of Marx Brothers' sketches reframed by Grosz in a minimalist Pythonesque nightmare at the Cottesloe.