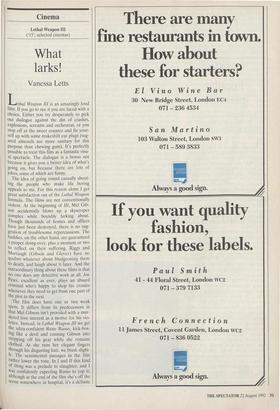 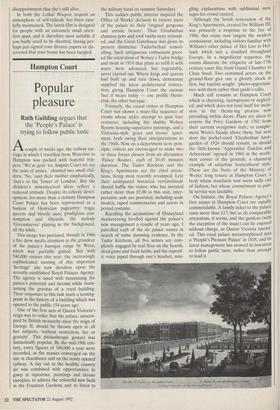 Lethal Weapon III is an amazingly loud film. If you go to see it you are faced with a choice. Either you try desperately to pick out dialogue against the din of crashes, explosions, screams and orchestras, or you stop off at the sweet counter and fix your- self up with some makeshift ear plugs (sug- ared almonds are more sanitary for this purpose than chewing gum). It's perfectly possible to treat this film as a fantastic visu- al spectacle. The dialogue is a bonus not because it gives you a better idea of what's going on, but because there are lots of jokes, some of which are funny.

The idea of going round casually shoot- ing the people who make life boring appeals to me. For this reason alone I get great satisfaction out of the Lethal Weapon formula. The films are not conventionally violent. At the beginning of III, Mel Gib- son accidentally blows up a skyscraper complex while boyishly larking about. Though thousands of homes and offices have just been destroyed, there is no sug- gestion of troublesome repercussions. The baddies, on the other hand, are guaranteed a proper doing-over, plus a moment or two to reflect on their suffering. Riggs and Murtaugh (Gibson and Glover) have no qualms whatever about bludgeoning them to death, and laugh about it later. And the extraordinary thing about these films is that no one does any detective work at all. Joe Pesci, excellent as ever, plays an absurd criminal who's happy to shop his cronies whenever they need to get from one part of the plot to the next.

The film does have one or two weak spots. It differs from its predecessors in that Mel Gibson isn't provided with a mur- dered love interest as a motive for his vio- lence. Instead, in Lethal Weapon III we get the ultra-confident Rene Russo, kick-box- ing like a devil and conning Gibson into stripping off his gear while she remains clothed. As she runs her elegant fingers through his disgusting hair, we blush slight- ly. The sentimental passages in the film rather lower the tone. In I and II this kind of thing was a prelude to slaughter, and I was confidently expecting Russo to cop it; although at the end of the film she's off the scene somewhere in hospital, it's a definite disappointment that she's still alive.

In both the Lethal Weapon sequels an atmosphere of self-ridicule has been care- fully maintained. The latest film is designed for people with an extremely small atten- tion span, and is therefore most suitable if you badly need to be diverted, having per- haps just signed your divorce papers or dis- covered that your house has been burgled.