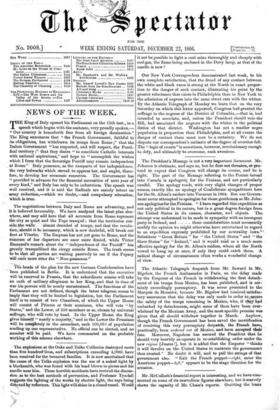 Page 1, 22 December 1866 — The President's Message is not a very important document. Mr.
Close

The President's Message is not a very important document. Mr.

Johnson is obstinate, and says so, but he does not threaten, or pre- tend to expect that Congress will change its course, and he is right. The part of the Message referring to the Fenian inroad into Canada is apologetic for the Fenians, and not particularly candid. The apology reads, with very slight changes of proper names, exactly like an apology of Confederate sympathizers here for the St. Alban's raiders into Vermont in 1884. But our Govern- ment never attempted to apologize for those gentlemen as Mr. John- son apologizes for the Fenians. " I have regarded this expedition as not only political in its nature, but in a great degree foreign from the United States in its causes, character, and objects. The attempt was understood to be made in sympathy with an insurgent party in Ireland, and . . . . these considerations must necessarily modify the opinion we might otherwise have entertained in regard to an expedition expressly prohibited by our neutrality laws."1 Substitute " Great Britain " for " the United. States " and " the Slave States" for "Ireland," and it would read as a much more effective apology for the St. Alban's raiders, whom all the North vowed to hang up at once, if only they could catch them. A. radical change of circumstances often works a wonderful change of view.