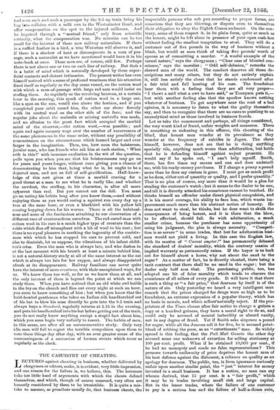 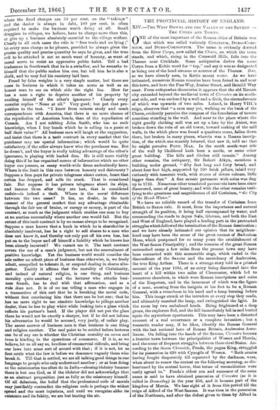 THE CASUISTRY OF CHEATING.

T ECTURES against cheating in business, whether delivered by 1.d clergymen or editors, make, it is evident, very little impression, and one reason for the failure is, we believe, this. The lecturers take too little heed of arguments with which the cheats defend themselves, and which, though of course unsound, very often are honestly considered by them to be irresistible. It is quite a mis- respectable persons who rob you according to proper forms, are conscious that they are thieving, or dispute even to themselves their obligation to obey the Eighth Comm andment. On the con- trary, some of them respect it, in its plain form, quite as much as the honest, might be left alone in presence of your open cash-box without feeling the smallest temptation to steal. They will do a customer out of five pounds in the way of business without a blush, but would as soon think of taking five pounds' worth of spoons as of committing a murder. "A woeful example of the carnal nature," says the clergyman ; "Clear case of blunted con- science," says the moralist ; " Odd self-delusion," remarks the shrewd man of the world. The conduct deserves all those de- scriptions and many others, but they do not entirely explain it, still less satisfy the cheat that he stands condemned after a fair trial and full hearing of his case. The fraudulent bear them with a feeling that they are all very proper- " I thowt a said what a owt to have said," as Tennyson puts it,— but with another feeling also that the speaker knows nothing whatever of business. To get anywhere near the root of a bad opinion, it is necessary to listen to What the guilty thetnaelaes say, and then to recognize that there are no cases so puzzling to an unanalytical mind as those involved in bilsiness frauds.

Let us take the commonest and perhaps, all thingS conaidefed, the very worst kind of fraud, unfair Weights and measures. There is something so sickening in this offence, this cheating of the blind, that honest men wonder at its prevalence as they wonder at the frequency of suicides in Japan. The cheat himself, however, does riot see that he is doing anything specially vile, anything mueh wbrae than adulteration, but holds that he is defending himself against unjust presatire. He would say if he spoke out, " I can't help myself. Smith, there, has five times my means and can and does undersell me, with his ready-money purchases. If I charge• a penny a pound more than he does my custom is gone. I must get as much' profit as he does; either out of quantity or quality, and I prefer quantity." That is no plea of course, any more than it would be a plea for stealing the customer's watch ; but it seems to•the dealer to be one, and till it is directly attacked his-conscience cannot be touched. He thinks himself an offender under direct physical compulsion, and it is his moral courage, his ability to face loss, which wants im- provement much more than his abstract notion of• honesty. He does not Want to steal, he thinks, but he does want to skulk the consequences of being honest, and it is there that the blow, to be effectual, should fall. So with adulteration, a much smaller crime, because the purchaser has some opportunity of using his judgment, the plea is always necessity. " Competi- tion is so severe" in some trades, that but for adulteration busi- ness would' not yield a living. In this case the English law, with its maxim of " Caveat emptor!" has permanently debased the standard of dealers' morality, which the contrary maxim of implied warranty as permanently raises. If the buyer is to look out for himself about a horse, why not about the sand in the sugar? As a matter of fact, he is directly cheated, there being a tacit contract that there shall be no' sand in the sugar -; but the dealer only half sees that. The purchasing public, too, has adopted one bit of false morality which tends to obscure the conscience of all sellers of every grade. It will have it that there is such a thing as " a fair price," that dearness by itself is of the nature of sin. Only yesterday we heard a very intelligent man remark that the prices charged for drugs were so high as to be fraudulent, an extreme expression of a popular theory, which has no basis in morals, and which sellerrnaturally reject. If the pro- prietors of the Times choose after fair notice to charge a guinea a copy or a hundred guineas, they have a moral right to do so, and could only be accused of mental imbecility or absurd vanity, not in any degree of fraud. Yet if Smith asks sixpence a pound for sugar, while all the Joneses sell it for five, he is accused point- blank of robbing the poor, as an "extortionate" man. So widely spread is this feeling, that the Pall Mail Gazette the other day accused some one unknown of extortion for selling stationery at 100 per cent. profit. What if he obtained 10,000 per cent., if he had no monopoly and made no false representations? This pressure towards uniformity of price deprives the honest man of his best defence against the dishonest, a reliance on quality as an apology for dearness. The public, too, is from ignorance curiously unfair upon another similar point, the " just" interest for money invested in a stuall business. It has a notion, no man tan say whence derived, that 15 per cent. is a " fair profit," which it may be in trades involving small risk and large capital. But in the lesser trades, where the failure of one customer

take to assume, as preachers usually do, that business cheats, the I to pay is a serious loss and the failure of half-a-dozen ruin,

where the fixed charges are 50 per cent. on the " takings " and the dealer is always in debt, 100 per cent. is often required to make the business worth doing at all. Small druggists in villages, we believe, have to charge more than this, or give up a business absolutely essential to the village welfare. Clearly in all such cases the role is " free trade and no lying ;" let every man charge as he pleases, provided he always gives the precise quality and precise quantity he says he gives, and the trite evil to be attacked is not so much want of honesty, as want of moral nerve to resist an oppressive public habit. Tell a bad tradesman in Southwark that he is a swindler, and he remarks to himself that the public makes him one, but tell him hem also 11 skulk, and he may feel his casuistry laid bare.

Fraud by false weights is a very simple matter, but there. are cases in business in which it takes an acute as well as an honest man to see on which side the right lies. Hew far has a man a right to deprive another of his property by availing himself of the other's ignorance ? Clearly every moralist replies "None at all." Very good; but put that pro- position to the test. "I know from minute study and much correspondence with America, that there is no more chance of the repudiation of American bonds, than of the repudiation of Consols. Am I not robbing John Smith, who has no such knowledge, when I buy bonds which he is selling in a panic at half their value ?" All business men will laugh at The suggestion, and insist that there is a tacit contract in every market that the purchaser may use special information ; which would be quite satisfactory, if the seller always knew who the purchaser was. But he doesn't, and the buyer is really taking advantage of the other's iporance, is playing with loaded dice. He is still more visibly doing this if he has organized means of information which no other buyer can possess, as many world-wide firms undoubtedly have. Where is the limit in this case between honesty and dishonesty? Suppose a firm 'pays for private telegrams about cotton, hears that cotton has dropped, and sells its stock. That is considered fair. But suppose it has private telegrams about its ships, and insures them after they are lost, that is considered unfair—is indeed a theft. Where is the moral difference between the two cases? It lies, no doubt, in the tacit -consent of the general market that any advantage obtainable through the fair use of brains, or energy or money, is part of the contract, as much as the judgment which enables one man to buy at an auction successfully where another one would fail. But the extent of this tacit contract is by no means always to be recognized. Suppose a man knows that a bank in which he is shareholder is absolutely insolvent, has he a right to sell shares to a man who does not know it, and thereby not only put off his own loss, but put on to the buyer and of himself a liability which he knows has been already incurred? We cannot see it. The tacit contract -covers the use of a marls judgment, but not the concealment of positive knowledge. Yet the badness world would consider the Bale rather an adroit piece of business than otherwise, is, we freely admit, compelled to tolerate it, or suspend dealing in shares alto- gether. Tacitly it affirms that the morality of Christianity, and indeed of natural religion, is one thing, and business morality quite another ; and the lecturer who attacks busi- ness frauds, has to deal with that affirmation, and as a rule does not. It is of no use telling a man who engages in a transaction of this sort that he is breaking the moral code, without first convincing him that there can be but one; that he has no more right to use absolute knowledge to pillage another dealer, than he has to play whist while looking into a glass which reffecte, his partner's hand. If the player did not put the glass there he would not be exactly a sharper, but if he did not inform his adversaries he would be accused, very justly, of unfair play. The secret answer of business men is that business is one thing and religion another. The real point to be settled before lectures can be of any use is whether the Christian morality on meant and lawn is binding in the operations of commerce. If it is, as we believe, let us all say so, heedless of commercial ridicule, and bring our laws into some sort of accord with that ; if it is not, let us first settle what the law is before we denounce vaguely those who break it. Till that is settled, we are all talking good things in one language to people who only understand another ; or at best doing as the missionaries too often do in India—abusing idolatry because there is but one God, as if the idolater did not acknowledge that as an abstract proposition just as fully as the missionary himself. Of all delusions, the belief that the professional code of morals may justifiably contradict the religious code is perhaps the widest spread and the most injurious, and until we recognize alike ita existence and its falsity, we are bat beating the air.