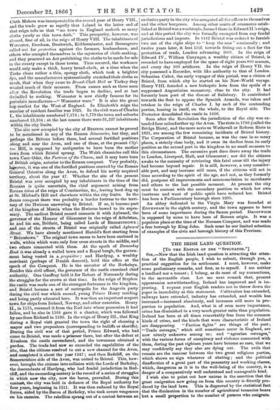 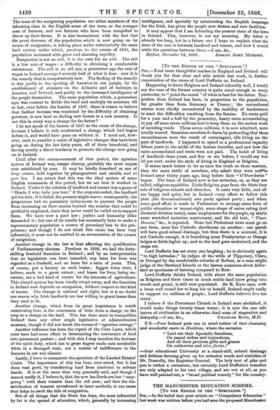 [To THE EDITOR OF THE " SPECTATOR."] Siff,—Now that the Irish land question is attracting the atten- tion of the English people, I wish to submit, through you, a

practical suggestion for its settlement. I must, however, make some preliminary remarks, and first, as to myself. I am neither a landlord nor a tenant ; I belong, as do most of my connections, to the mercantile class. Let me next remark that, present appearanCes notwithstanding, Ireland has improved and is im- proving. I request your English readers not to throw down the paper in incredulity at this statement. Cultivation has extended, railways have extended, industry has extended, and wealth has increased—increased absolutely, and increases still more in pro- portion to population. And, what is of even more importance, crime has diminished in a very much greater ratio than population. Ireland has been at all times remarkably free from the common kinds of crime, and the kinds that were characteristic of Ireland are disappearing. "Faction fights" are things of the past; "Trade outrages," which still sometimes occur in England, are now utterly unknown among us; and "agrarian outrages," with the various forms of conspiracy and violence connected with them, during the past eighteen years have become so rare, that we may confidently say they also are dying oat. The evils that remain are the rancour between the two great religious parties, which shows no sign whatever of abating ; and the political disaffection of a great part of the peasantry and working classes, which, dangerous as it is to the well-being of the country, is a danger of a comparatively well understood and manageable kind.

great emigration now going on from this country is directly pro- duced by the land laws. This is disproved by the statistical fact that the diminution in the number of agricultural tenancies bears but a small proportion to the number of persons who emigrate. The mass of the emigrating population are either members of the labouring class in the English sense of the term, or the younger sons of farmers, and not farmers who have been compelled to

throw up their farms. It is also inconsistent with the fact that the great decrease of the population which is now going on by

means of emigration, is taking place under substantially the same land system under which, previous to the census of 1841, the population increased with great and alarming rapidity.

Emigration is not an evil, it is the cure for an evil. The evil is a low rate of wages : a difficulty in obtaining a comfortable subsistence. The evil is an old one, a generation ago the rate of wages in Ireland averaged scarcely half of what it does now it is the remedy that is comparatively new. The finding of the remedy is due partly to the opening of America to our people, by the establishment of steamers on the Atlantic and of railways in America and Ireland, and partly to the increased intelligence of the people themselves. The same population which, a generation ago, was content to divide the land and multiply its numbers till at last, even before the famine of 1847, there is reason to believe that farther increase was restricted by the difficulty of obtaining potatoes, is now bent on finding new homes in a new country. Is not this in every way a change for the better ?

I do not speak of the famine of 1847 as the cause of the change, because I believe it only accelerated a change which had begun before it, and would have gone on without it. I must not, how- ever, omit to consider a series of legislative changes that have been going on during the last forty years, all of them beneficial, and having mostly a direct tendency to promote the change now going on in Ireland.

Until after the commencement of that period, the agrarian system of Ireland was, except slavery, probably the most unjust ever established by man. It may be briefly described as one of large estates, held together by primogeniture and entails, and no poor law. I am aware that this was the ideal system of some English economists of the period, but we see how it worked in Ireland. Under it the relation of landlord and tenant was a game of " Heads, I win; tails, you lose;" if the crop succeeded, the landlord got his rent; if it failed, the peasant might starve; consequently, the proprietors had no pecuniary inducement to prevent the people from increasing on their estates beyond the number that could be profitably employed, since they never could be called on to support them. We have now a poor law ; justice and humanity alike demanded it ; but one of its results has necessarily been to make a supernumerary population a source of pecuniary loss to the pro- prietors; and though I do not think this cause has been very influential, it must not be omitted in an enumeration of the causes of emigration.

Another change in the law iethat affecting the qualification of Parliamentary electors. Previous to 1828, we had the forty- shilling freehold franchise in Ireland ; and by an interpretation that no legislature can have intended, any lease for lives was regarded as a freehold, and no lease for a term of years. This, of course, put a bounty on such leases ; faggot votes were, I believe, made to a great extent ; and leases for lives, being un- certain, are a bad kind of tenure for the interests of agriculture. This absurd system has been totally swept away, and the franchise in Ireland now depends on occupation, without respect to the kind of tenure. The change is rational and right, but it is no doubt one reason why Irish landlords are less willing to grant leases than they used to be.

Another change, which from its great importance is worth mentioning here, is the conversion of tithe from a charge on the crop to a charge on the land. This has done more to tranquillize Ireland than any other single legislative or administrative measure, though it did not touch the causes of " agrarian outrage."

Another influence has been the repeal of the Corn Laws, which must have had some effect in determining the conversion of land into permanent pasture ; and with this I may mention the increase of the spirit duty, which has in great degree made oats unsaleable when in a damaged state, not a matter of indifference to the farmers in our wet climate.

Lastly, I have to enumerate the operation of the Landed Estates' Court. The importance of this has been over-rated, but it has done vast good, by transferring land from insolvent to solvent hands. It is at the same time very generally said, and though I cannot verify it, I believe it, that the new landlords are less " easy- going" with their tenants than the old ones ; and that the dis- satisfaction of tenants accustomed to Taxer methods, is one cause that helps to swell the tide of emigration.

But of all things that the State has done, the most influential by far is the spread of education, which, generally by increasing intelligence, and specially by substituting the English language for the Irish, has given the people new desires and new facilities.

It may appear that I am defending-the present state of the laws in Ireland. This, however, is not my meaning. My letter is already too long, but in a future one I hope to explain what the state of the case is between landlord and tenant, and how I would settle the questions between them.—I am, &c.,