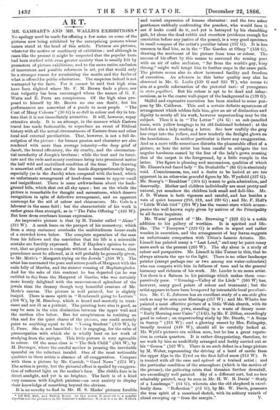 MR. GAMBART'S AND MR. WALLIS'S EXHIBITIONS.* No apology need be made for offering a few notes on some of the pictures now being exhibited by the enterprising persons whose names stand at the head of this article. Pictures are pictures, whatever the motive or machinery of exhibition ; and although in cases like the present it might be suspected that the popular taste had been studied with even greater anxiety than is usually felt by promoters of picture exhibitions, and to the more entire exclusion of innovators and possible reformers in art, yet that would only be a stronger reason for scrutinizing the merits and the faults of what is offered for public admiration. The suspicion indeed is not warranted by the facts. For it cannot be said that high aims have seen slighted where Mr. F. M. Brown finds a place, nor that vulgarity has been encouraged where the names of G. F. Watts and E. Frere are conspicuous. Of the high aims pro- posed to himself by Mr. Brown no one can doubt, but his performances are somewhat of a puzzle to most people. " The Coat of Many Colours " (30 G) is so dull in colour and dry in tex- ture that it is not immediately attractive. It will, however, repay attentive study. It is an attempt, in the manner which Eastern travel has made fashionable, to reproduce an event of Biblical history with all the actual circumstances of Eastern dress and other local and external peculiarities. That, however, is not a full de- scription of the picture : for human passion and character are also rendered with more than average intensity—the deep grief of Jacob, the brutal effrontery, the sly cruelty, and the circumstan- tial mendacity of Joseph's brethren ; while the tent and its furni- ture and the rude and scanty costumes bring into prominent notice the half wild and uncivilized condition of the time. The drawing is somewhat stiff, and some of the hands disproportionately large, especially (as in the Jacob) when compared with the head, which an unfortunate arrangement of head-dress causes to appmr small and insignificant. There is some awkwardness about the back- ground hills, which shut out all sky space ; but on the whole the picture is remarkable for thought and earnestness, which deserve recognition in spite of defective arrangement, and an apparent contempt for the aid of colour and chiaroscuro. Mr. Gale is a labourer in the same field ; but the characteristic of his work is rather grace than strength, as in " The Palm Offering " (426 W). But here dress overbears human expression.

An impressive picture is that by M. Tourier called " Alone" (311 W). A monk leans on the parapet of his monastery, which from a steep eminence overlooks the multitudinous house-roofs of a crowded town below. The complete separation of the man from his fellows and the conviction that his life is a miserable mistake are forcibly expressed. But if Haydon's opinion be cor- rect, that no picture is complete without a beautiful woman, then precedence must be allowed, as it will probably be generally given, to Mr. Merle's " Margaret trying on the Jewels " (358 W). The artist has contrasted the pure and serene youth of Margaret with the anile folly of Martha, and the sinister cunning of Mephistopheles. And for the sake of this contrast he has departed (as he was entitled to do) from the Margaret of Goethe, who was certainly more keenly delighted with the unaccustomed splendour of the jewels than the dreamy though very beautiful creature of Mr. Merle's canvas. The picture is well painted, but is slightly insipid. There is more spirit in " Rembrandt going to Lecture " (398 W), by M. Bisschop, which is broad and masterly in treat- ment and not ill as a portrait. The painting here also is good, as may be seen in the nice distinction between the upper wall and the earthen tiles below. But for completeness in realizing an idea and for the quiet charm of the picture, one could scarcely point to anything equal to the "Young Student " (459 W), by E. Frere. She is not beautiful ; bet is engaging, for the calm of preoccupation with which she is wholly bent on her work of studying from the antique. This little picture is very agreeable in colour. Of the same class is "The Sick Child" (364 W), by M. Duverger, where the careful mother is pressing the inevitable spoonful on the reluctant invalid. One of the most noticeable qualities in these artists is absence of all exaggeration. Compare with them a picture by Mr. Carrick, " Good News" (273 W). The action is pretty, but the pictorial effect is spoiled by exaggera- tion of reflected light on the mother's face. The child's face is in direct sunlight, and yet is no brighter. The fault is of a kind very common with English painters—an over anxiety to display their knowledge of something beyond the obvious.

It is no novelty to find in Mr. H. S. Marks' pictures forcible

• 120 Pall Mali, and Suffolk Street. In th:s notice, ta attached to a number signifies that the picture is in Mr. Gambart's collection; W, that it is iu Mr. Wallis's.

and varied expression of human character : and the two sober gentlemen suddenly confronting the poacher, who would face it out if looks could do it, and yet is betrayed by his shambling gait, let alone the dead rabbit and crossbow (evidence enough for conviction before any justice of the peace), is a very good specimen in small compass of the artist's peculiar talent (157 G). It is less common to find him, as in the "The Garden at Olney" (158 G), drawing the sentiment of his picture from tone or colour. The success of his effort by this means to surround the musing poet with an air of calm seclusion, " far from the world's gay, busy throng," might well tempt him to further steps in the same path. The picture seems also to show increased facility and freedom of execution. Au advance in this latter quality may also be observed in Mr. G. Leslie (139 G and 325 W), who seems to aim at a gentle reformation of the pictorial taste of youngsters in stain pupillnri. But his colour is apt to be dead and inhar- monious, as in the coarse wall-paper of the background in (139 G).

Skilful and expressive execution has been studied to some pur- pose by Mr. Calderon. This and a certain definite squareness of arrangement which seldom fails him, give an air of distinction and dignity to nearly all his work, however unpretending may be the subject. Thus it is in "The Letter" (34 G) : an oak-panelled room, with yellow hangings to its old-fashioned bedstead ; at the bed-foot sits a lady reading a letter. See how craftily the grey has crept into the yellow, and how tenderly the firelight glows on the hearthstone. In neither particular is there any exaggeration, And as a mere trifle sometimes disturbs the pleasurable effect of a. picture, so here the artist has been careful to mitigate the too angular harshness caused by the line of the lady's gown crossing that of the carpet in the foreground, by a little rumple in the latter. The figure is pleasing and unconscious, qualities of which Mr. Elmore's red-faced lady " En Deshabille " (86 G) is absolutely void. .Consciousness, too, and a desire to be looked at are too apparent in an otherwise graceful figure by Mr. Wynfield (227 G). Mr. Storey's " Breakfast" (204 G) is sure to gain admiration, and deservedly. Mother and children individually are most pretty and natural, yet somehow the children look small and doll-like. Mr. J. D. Watson is both vigorous and careful, and has besides a vein of quiet humour (218, 219, and 220 G) ; and Mr. F. Hell's " Little Welsh Girl" (294 W) has the vacant stare which accom- panies the well known reply given by natives of the Principality to all Saxon inquirers.

Mr. Watts' portrait of " Mr. Browning " (223 G) is a noble addition to his gallery of worthies. It is spirited and life- like. The " Tennyson " (222 G) is sullen in aspect and rather wooden in execution, and the arrangement of bay leaves suggests an unfortunate comparison with Titian's famous Ariosto. Mr. Linnell has painted many a " Last Load," and may he paint many more such as the present (263 W). The sky alone is a study of colour and perspective. Mr. Linnell is like Turner in this, that he always attracts the eye to the light. There is no other landscape painter (except perhaps one or two among our water-colourists) who can compete with him in fullness of tone and in the general harmony and richness of his work. Mr. Leader is no mean artist. Yet there is a flatness in his paintings which makes them com- paratively poor. "Evening—Valley of the Lledr " (360 W) has, however, many good points of colour and treatment ; but the artist appears to have been hampered by intractable local peculiari- ties. Mr. C. E. Johnson has an excellent study of a sea-side glen such as may be seen near Hastings (217 W) ; and Mr. Whaite has painted a most effective picture of a little Welsh church, with its clump of sheltering yews, standing in a waste of dreary moor. " EarlyMorning near Cairo" (74 G), byll.r. F. Dillon, exceedingly good in colour ; an unpretending study by Mr. Dearle, " A Seep in Surrey " (213 W) ; and a glowing sunset by Mrs. Folingsby, broadly treated (448 W), should all be carefully looked at. Mr. Wyld's pictures are seldom seen, but he has a great reputa- tion in certain quarters. It is rather disappointing, therefore, to see work by him so unskilfully arranged and feebly carried out as his " Genoa " (163 W). There is no such defect in a large picture by M. Weber, representing the driving of a herd of cattle from the upper Alps in the Tyrol on the first fall of snow (313 W). It is treated with all the ease and aplomb of a trained artist ; and the particular condition of the atmosphere (which is the motive of the picture), the gathering mists that threaten further downfall, are exceedingly well painted. Sky of a different sort, but no less admirably painted, may be seen in Mr. H. W. B. Davis' " Study of a Landscape" (64 G), wherein also the old shepherd is excel- lently done. " Reflection " (63 G), by Mr. W. Davis, possesses the true spirit of a moorland sketch, with its solitary wreath of cloud sweeping up " from the margin." V.