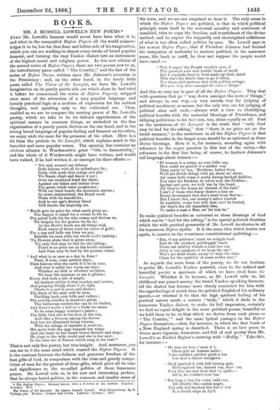 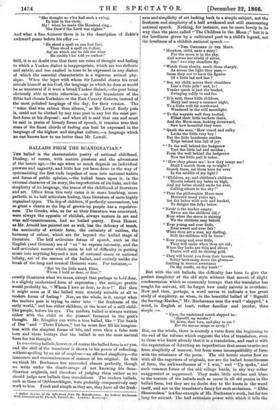 MR. J. RUSSELL LOWELL'S NEW POEMS * EVEN Mr. Lowell's humour would never have been what it is, and what in the unequalled Biglow Papers all the world acknow- ledges it to be, but for that finer and loftier side of his imagination, which you can see working in almost every stroke of broad popular humour, and turning the racy Yankee dialect into an instrument of the highest moral and religious power. In this new edition of the second series of Biglow Papers, there are two poems new to us, the introductory poem called " The Courtin'," and the last of the series of Biglow Poems, written since Mr. Johnson's accession to the Presidency ; and, on the other hand, in the lovely little poem called The Vision of Sir Launfal, we have Mr. Lowell's imagination on its purely poetic side (on which alone he had tried it before he commenced the series of Biglow Papers), stripped once more of the attraction of a racy popular language and homely practical logic as a medium of expression for the noblest thoughts, and speaking only to the cultivated ear. Thus, enabled as we are to compare the moving power of Mr. Lowell's poetry, which we take to be its delicate apprehension of the spiritual essence in common things, as embodied in the fine organization of a purely poetic diction on the one hand, and in the strong broad language of popular feeling and humour on the other, we enjoy each the more for the presence of the other. Here is a bit from the prelude to Sir Launfal, which explains much in the homelier and more popular verses. The opening line contains an obvious allusion to Wordsworth's great " Ode to Immortality," and the whole of it Wordsworth might have written, and would have valued, if he had written it, as amongst his finer efforts :—

" Not only around our infancy

Doth heaven with all its splendours lie ; Daily with souls that cringe and plot We Sinais climb and know it not ; Over our manhood bend the skies; Against our fallen and traitor lives The great winds utter prophecies ; With our faint hearts the mountain strives; Its arms outstretched, the Druid wood Waits with its benedicite; And to our age's drowsy blood Still shouts the inspiring sea.

" Earth gets its price for what earth gives us The beggar is taxed for a corner to die in, The priest hath his fee who comes and shrives us, We bargain for the graves we lie in; At the Devil's booth are all things sold, Each ounce of dross costs its ounce of gold; For a cap and bells our lives we pay, Bubbles we earn with our whole soul's tasking ; 'Tie Heaven alone that is given away, 'Tis only God may be had for the asking; There is no price set on the lavish summer, And June may be had by the poorest comer.

Then, if ever, come perfect days; Then heaven tries the earth if it be in tune, And over it softly her warm ear lays; Whether we look or whether we listen, We hear life murmur or see it glisten; Every clod feels a stir of might, An instinct within it that reaches and towers,

And grasping blindly above it for light,

Climbs to a soul in grass and flowers ;

The flush of life may well be seen, Thrilling back over hills and valleys ; The cowslip startles in meadows green, The buttercup catches the sun in its chalice, And there's never a leaf or a blade too mean To be some happy creature's palace ; The little bird sits at his door in the sun, Atilt like a blossom among the leaves And lets his illumined being o'errun, With the deluge of summer it receives; His mate feels the eggs beneath her wings And the heart in her dumb breast flutters and sings ; He sings to the wide world and she to her nest; In the nice ear of Nature which song is the best?"

That is not only fine poetry, but true insight. And, moreover, you can see in it the same mind which created the Biglow Papers. It is the contrast between the fullness and generous freedom of the best gifts of God, in comparison with the close and greedy compe- tition of men for the poorest of those gifts, which gives all its tone and significance to the so-called politics of those humouous poems. Mr. Lowell tells us, in his new and interesting preface, that he always hated politics, in the common and smaller sense of

* The Biglow Papers. Second Seriee, with a Portrait of the Author. London : Triibner. 18t7.

the term, and we are not surprised to hear it. The only sense in which the Biglow Papers are political, is that in which political principle roots itself in the universal morality and sentiment of mankind, tries to copy the freedom and trustfulness of the divine method, and to expose the niggardly and shortsighted selfishness of what is too often called politics by men. Mr. Lowell says in his newest Biglow Paper, that if President Johnson had limited his usurpation of authority' to matters political, in the narrower sense, like bank or tariff, he does not suppose the people would have cared :-

" Wal, I expec' the People would'n care, if The question now wuz techin' bank or tariff, But 1 conclude they've 'bout made up their mind This ain't the fittest time to go it blind, Nor these ain't metters thet with portics swings, But goes 'way down amongst the roots o' things."

And this we may say in part of all the Biglow Papers. They deal with questions that go "'way down amongst the roots o' things," and always in one way,—a very unsafte way for judging of political machinery or means, but the only true one for judging of political aims and ends,—always with a view to identifying political benefits with the universal blessings of Providence, and obliging politicians to let their sun, too, shine equally on all. Just as the undertone of Sir Launfal is the truth that "only God may be had for the asking," that "there is no price set on the lavish summer," so the undertone in all the Biglow Papers is that political benefits in the larger sense should be as universal as these divine blessings. Here it is, for instance, sounding again with reference to the negro question in this last of the series,—the reference in the first line being, of course, to Andrew Johnson's tall language about treason :—

" Ef treason is a crime, ez some folks say,

How could we punish it a milder way Than sayin' to 'em, 'Brethren, lookee here.

We'll jes divide things with ye, sheer an' sheer, An' sence both come o' pooty strong-backed daddies, You take the Darkies, ez we've took the Paddies ; Ign'ant and poor, we took 'em by the hand, An' they're the bones an' sinners of the land.'

I ain't o' them who fancy there's a loss on Every investment thet don't start from Bos'on:

But I know this, our money's safest trusted

In sumthin', come wut will, that can't be busted, An' that's the old Amerikin idea,

To make political benefits as universal as those blessings of God which can be " had for the asking," is the special political doctrine which the wide poetical generosity of Mr. Lowell inculcates in all his humorous Biglow squibs. It is the same idea which bursts out again, in answer to the wearisome constitutional quibbling :—

" But, 0 my patience ! must we wriggle back Into th' ole, crooked, pettifoggin' track When our artil'ry wheels a road hey cut Stret to our purpose of we keep the rut? War's jes dead waste, excep' to wipe the slate Clean for the cyph'rin' of some nobler fate."

As regards the mere form of the poetry, we do not hesitate to prefer Mr. Lowell's Yankee pastoral, even to the refined and beautiful poetry a specimen of which we have cited from Sir Launfal. Whether it be because, as Mr. Lowell tells us, his childhood was passed among the broad Yankee-speaking farmers, till the dialect has become more closely associated for him with the eager feelings of youth than the polished English of his ordinary speech,—or whether it be that the high spiritual feeling of his poetical nature needs a certain " body," which it finds in the humorous Yankee dialect, to make its full impression, certainly we find no equal delight in his more polished poems, beautiful as we hold them to be, to that which we derive from such pieces as "The Courtin,'" and the more lyrical passages in the Biglow Papers themselves,—that, for instance, in which the first burst of a New England spring is described. There is no love poem in Burns more vigorous, humorous, and full of real poetry than Mr. Lowell's on Ezekiel Biglow's courting with " Htddy." Take this, for instance :-

" He was six foot o' man A 1, Clean grit an' human natur ; None couldn't quicker pitch a ton Nor dror a furrer straighter.

" He'd sparked it with full twenty gals, He'd squired 'em, danced 'em, drnv 'cm, Fust this one and then thet by spells,— All is, he couldn't love 'em.

"But long o' her his veins 'ould run, All crinkly like curled maple. The side she breshed felt full o' sun Ez a South slope in Ap'il.

"She thought no Vice hed such a swing, Ez hisn in the choir,

My! when he made Ole Hundred ring,. She know'd the Lord was nigher."

And what a fine humour there is in the description of Zekle's awkward pause before his offer :—

" He stood a spell on one foot lust,

Then stood a spell onyother, An' on which one he felt the wnst He couldn't ha' told ye nuther."

Still, it is no doubt true that there are veins of thought and feeling to which a Yankee dialect is inappropriate, which are too delicate and subtle, and too exalted in tone to be expressed in any dialect of which the essential characteristic is a vigorous animal phy- sique. When the leper with whom Sir Launfal shares his crust reveals himself as his God, the language in which he does so would be as unnatural if it were a broad Yankee dialect,—the poet being obviously able to write otherwise,—as if the translators of the Bible had chosen Yorkshire or the East County dialects, instead of the moat polished language of the day, for their version. The " voice that was calmer than silence," as Mr. Lowell finely puts it, could not be clothed by any true poet in any but the most per- fect form at his disposal ; and when all is said that can and must be said in praise of homely forms of speech, it remains true that some of the finest chords of feeling can best be expressed in the language of the highest and simplest culture,—a language which no one knows how to use better than Mr. Lowell.