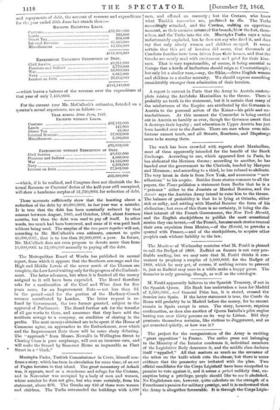 Page 2, 22 December 1866 — The Metropolitan Board of Works has published its annual report,
Close

The Metropolitan Board of Works has published its annual report,

from which it appears -that the Southern sewerage and the High and Middle Levels of the sewer north of the Thames are complete, the Low Level waiting only for theprogress of the Embank- ment. The latter advances, bet when it is finithed all the money assigned to it will have been expended. The Board therefore asks for a continuation of the 'Coal and Wine dues for five years more, for an Improvement Rate — not less than 3d. in the pound—and for the portion of the liaekney.;Coach revenue contributed by London. The latter request is re- fused by 'Government, the two 'former granted, subject to the approval of Parliament. The Board further ask for the transfer of all gas works to them, and announce that they have sold the southern sewage to a company, on condition of sharing in the prbfits. The next moneys obteited aee'to be spent, if the House of Commons agree, on approaches to the Embankment, over -which and the Improvement Rate there will be some sharp debating. The " approach " from Messes. Newell's in Wellington Street to Charing Cross is pure surplusage, will cost an immense sum, and will make the Strand by Somereet House as impassable as Fleet Street in a " black."