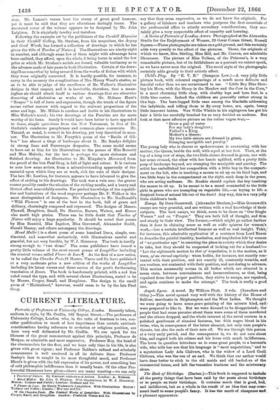 and Otley.)—This novel opened very well with the history of the House of Balfour, merchants in Shiphampton and the West Indies. We thought we were going to have some genre painting of the minute kind, and, were prepared to like it. Bat we were doomed to be disappointed; the people that had some promise aboutthem were some of them murdered and the others dropped, and the whole interest of the novel centres in a polished gentleman of classical features, but with negro blood in his veins, who, in consequence of the latter element, not only ants people's• throats, but also the ends of their ears off. We see through this person at a very early period, and the consequence is, we do not care about him, and regard both his crimes and his loves with much indifference.. The loves in question introduce us to some great people, to a baronet's wife, who tells her son that his language is "most unpatrician," and to a mysterious Lady Ada Chilvers, 'who is the widow of a Lord Cecil Chilvers, who was the son of an.earl. We think that our author would have done better to stick to the old maids and old bachelors of the commercial house, and left the sensation business and the -aristocracy alone.