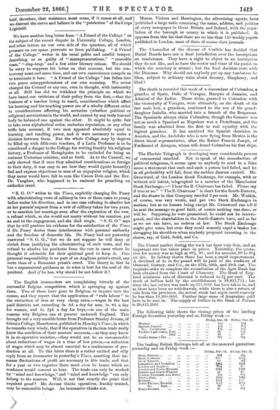 The Consol market during the week has been very firm,

and an important rise has taken place in prices. Yesterday, the quota- tion for money was as high as 89k, 90 ; and for account,_90-to 901 ex. div. In railway shares there has been a rapid improvement. A dividend of 4s. in the pound -will 'be paid to the creditors of Overend, Gurney, and Co., on the 27th, -28th, and 29th hest. The requisite order to complete the resuscitation of the Agra Bank has been obtained from the Court of Chancery. The Bank of Eng- land minimum rate of discount is reduced to 3i per cent. The stock of bullion held by the establishment is 18,81.5,714 ; but since the last return was made up 315,000/. has been taken in, and as there have been no withdrawals, while there is also a-return of coin from the provinces, the actual stock last night could eoareely be less than 19,200,000/. Further large sums of Australian gold have to be sent in. The supply of bullion in the Bank of France is 28,415,200/.