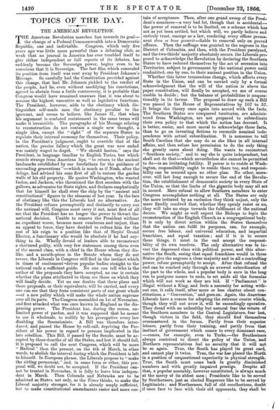 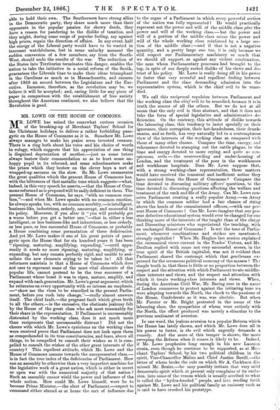 MHE American Revolution marches fast towards its goal- 1 the change of a Federal Commonwealth into a Democratic Republic, one and indivisible. Congress, which only five years ago was little more powerful than a debating club, so weak that no journal in America has ever troubled itself to give either independent or full reports of its debates, has suddenly become the Sovereign power, begins even to be conscious that it is Sovereign. The last film which concealed its position from itself was rent away by President Johnson's Message. So carefully had the Constitution provided against this change, that had Mr. Johnson yielded to the verdict of the people, had he, even without modifying his convictions, agreed to abstain from a futile controversy, it is probable that Congress would have remained unaware that it was about to assume the highest executive as well as legislative functions. The President, however, adds to the obstinacy which dis- tinguishes self-made men the obstinacy peculiar to the ignorant, and seems to believe, like James H., that when his argument is confuted restatement in the same terms will make it irresistible. The paragraphs of his Message relating to reconstruction do not contain a single new thought, a single idea, except the " right " of the separate States to regulate their internal economy for themselves. Their policy, in the President's judgment, ought to override that of the nation, the precise fallacy which the great war now ended was mainly waged to dispel. " We should hasten," says the President, in language familiar to English Tories, but which sounds strange from American lips, " to return to the ancient landmarks established by our forefathers for the guidance of succeeding generations "—which is much as if Noah, after the deluge, had advised his sons first of all to restore the garden walls of his old property. He quotes Washington, who wanted fusion, and Jackson, who threatened the first seceders with the gallows, as advocates for State rights, and declares emphatically that for himself he shall steer the ship by the " ancient and constitutional" figures in the almanac of last year. In the face of obstinacy like this the Liberals had no alternative. As the President refuses peremptorily and distinctly to carry out the national will, Congress must carry it out, must first of all see that the President has no longer the power to thwart the national decision. Unable to remove the President without an expedient worse, because more cumbrous and unjust, than an appeal to force, they have decided to reduce him for the rest of his reign to a position like that of Sieyes' Grand Elector, a functionary who would be absolute if he had any- thing to do. Wholly devoid of leaders able to reconstruct a shattered polity, with very few statesmen among them even of the second class, with a chief in the House whom they dis- like, and a mouth-piece in the Senate whom they do not revere, the Liberals in Congress still find in the instinct which in times of excitement drives popular bodies straight to the national ends a sufficient guide. No one can tell who is the author of the proposals they have accepted, no one is certain whether the plans attributed to them are those on which they will finally decide. Yet no one doubts that these plans and those proposals, or their equivalents, will be carried, and every one can see that they form consistent parts of one great whole —of a new polity which will make the whole nation supreme over all its parts. The Congress assembled on let of November, and first attacked what was once known in England as the dis- pensing power. The President has, during the recess, un- limited power of pardon, and it was supposed that he meant to use it wholesale, to nullify by his prerogative every law disabling the Secessionists. A Bill was therefore intro- duced, and passed the House by roll-call, depriving the Pre- sident of his power in regard to persons implicated in the late rebellion. This Bill, if passed by the Senate, must be ac- cepted by three-fourths of all the States, and lest it should fail, it is proposed to call the next Congress, which will be more " Radical " than the present, on the 4th of March, in other words, to abolish the interval during which the President is left to himself. In European phrase, the Liberals propose to "make the sitting permane4t," and, in some form or other, this pro- posal will, we doubt not, be accepted. If the President can- not be trusted in November, it is folly to leave him indepen- dent in March. Then Colorado and Nebraska are to be admitted as States, not only, as the Times thinks, to make the Liberal majority stronger, for it is already amply sufficient, but to make constitutional amendments easier and more cer-

tain of acceptance. Then, after one grand sweep of the Presi- dent's nominees—a very bad lot, though that is accidental— the power of removal is to be limited, on a scheme which has not as yet been settled, but which will, we partly believe and entirely trust, emerge as a law, rendering every officer perma- nent dum se bene gesserit—liable to removal only on proved offence. Then the suffrage was granted to the negroes in the District of Columbia, and then, with the President paralyzed, and the two-thirds' majority absolutely secure, the Liberals pro- posed to acknowledge the Revolution by declaring the Southern States to have reduced themselves by the act of secession into Territories, subject to government by the national power until readmitted, one by one, to their ancient position in the Union..

Whether this latter tremendous change, which affects every State in the Union, and can be carried only by a formal acknowledgment that the will of the nation is above the paper constitution, will finally be accepted, we are of course unable to decide ; but the balance of probabilities is unques- tionably in its favour. The proposal to draw up such a Bill was passed in the House of Representatives by 107 to 37. It brings the theory once again into accord with the facts. The Southern States are conquered territories, are adminis- tered from Washington, are not prepared to subordinate their own policy to that which the nation has decreed. It is better, easier, and more moral to acknowledge those facts, than to go on inventing fictions to reconcile nominal inde- pendence with actual subordination. It is nonsense to tell South Carolina that she may do as she likes in all internal affairs, and then refuse her permission to do the only thing she greatly cares about doing. She wants to reconstruct " Southern society," and to say she is quite independent, but shall not do that—which nevertheless she cannot be permitted to do—is an irritating futility. If power is to reside at Wash- ington, responsibility ought to reside there too, and responsi- bility can be secured upon no other plan. No other,-more- over, will last long enough to secure the end of the Revolu- tion, the establishment of democratic society in every State of the Union, so that the limbs of the gigantic body may all act in accord. Mere refusal to allow Southern members to enter Congress accomplishes nothing at all. The States are only the more irritated by an exclusion they think unjust, only the more fixedly resolved that, whether they openly resist or no, they will take no steps towards the fulfilment of the national decree. We might as well expect the Bishops to begin the reconstruction of the English Church as a congregational body. It is only by direct action within the States themselves that the nation can fulfil its purposes, can, for example, secure free labour, and universal education, and impartial franchises, and equal taxation ; and if it is to secure these things, it must in the end accept the responsi- bility of its own resolves. The only alternative was to in- vest the depressed class with political power, and this alter- native the South, seeing that equal franchises would in three States give the negroes a clear majority and in alla controlling power, refuse peremptorily to accept. After that refusal the end can be reached only through an avowed subordination of the part to the whole, and a popular body is sure in the long run to postpone means to ends, to set aside all the formulas which will not work as they are bid. If " Parliament " is illegal without a King, and feels a necessity for acting. with- out one, it calls itself, after more or less chatter about con- stitutions, a " Convention," and goes on. Again, the American Liberals have a reason for adopting the extreme course which, though they will not avow it, will be exceedingly operative. They dread with an unhealthy but natural fear:the return of the Southern members to the Central Legislature, fear lest, though victors in the field, they should find themselves overmastered in the forum. Partly from their superior leisure, partly from their training, and partly from that instinct of government which comes to every dominant race, —comes, for example, even to Turks,—the Southerners always contrived to direct the policy of the Union, and Northern representatives feel no security that it will not be so again. True, the South has played its great card, and cannot play it twice. True, the war has placed the North in a position of unquestioned superiority in physical strength. True, the South must come back in greatly diminished numbers and with greatly impaired prestige. Despite all that, a popular assembly, however constituted, is always much at the mercy of its ablest men ; Presidents like to be served by Southerners, just as elected Emperors like to be served by Legitimists ; and Northerners, full of old recollections, doubt if once face to face with their old opponents, they shall be able to hold their own. The Southerners have strong allies in the Democratic party, they share much more than their opponents in the popular passion for showy deeds, they have a reason for pandering to the dislike of taxation, and they might, during some surge of popular feeling, say against high prices, regain the direction of affairs. In any event, half the energy of the Liberal party would have to be wasted in incessant watchfulness, lest in some unlucky moment the sudden conversion of a few members, say from the South- West, should undo the results of the war. The reduction of the States into Territories terminates this danger, enables the nation to take the initiative in a social reform of the South, guarantees the Liberals time to make their ideas triumphant in the Carolinas as much as in Massachusetts, and ensures after 1868 an accord between the Legislature and the Exe- cutive. Immense, therefore, as the revolution may be, we believe it will be accepted; and, caring little for any piece of paper in comparison with the establishment of free society throughout the American continent, we also believe that the Revolution is good.