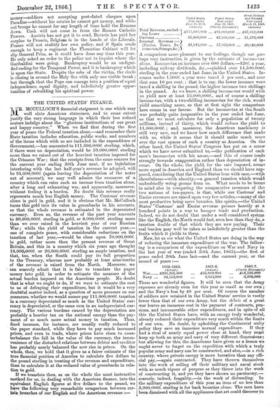 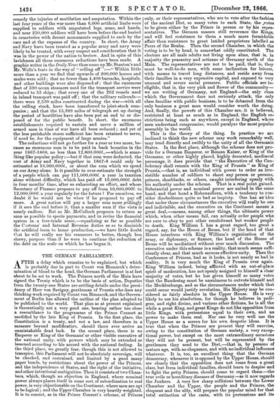 If MCCULLOCH'S financial statement is one which may J. well elate American statesmen, and to some extent justify the very strong language in which their less refined

orators indulge about the "glorious institootions of our great and happy country." When we find that during the first year of peace the Federal taxation alone,—and remember their

State taxation includes education, public works, and numbers of the items which with us are included in the expenditure of Government,—has amounted to 111,606,000/. sterling, which, if there were no depreciation, would be 39,000,0001. sterling more than we raised out of the heaviest taxation imposed for the Crimean War ; that the receipts from the same sources for the current year ending 30th June next, if no legislation interfering with the last half-year's revenue be adopted, will be 95,000,0001. (again leaving the depreciation of the notes out of account), we may well admire the resources of a country which can raise such an income from taxation alone, after a long and exhausting war, and apparently, moreover, without feeling it a burden. No doubt this revenue really represents much less English money. The Customs' revenue alone is paid in gold, and it is obvious that Mr. McCulloch turns this gold into its value in greenbacks in his accounts, so that the whole revenue is estimated in the depreciated currency. Eren so, the revenue of the past year amounts to 80,000,0001. sterling in gold, or 8,000,0001. sterling more than we ever raised in the heaviest year of our Russian War; while the yield of taxation in the current year,— one of complete peace, with considerable reductions on the taxation of last year,—would be close upon 70,000,0001. in gold, rather more than the present revenue of Great Britain, and this in a country which six years ago thought 18,000000/. or 20,000,0001. sterling an ample taxation, and that,. too, when the South could pay its full proportion to the Treasury, whereas now probably at least nine-tenths of the revenue is raised from the North. Moreover, we can scarcely admit that it is fair to translate the paper money into gold,- in order to estimate the measure of the actual- burden imposed on the American people. No doubt that is what we ought to do, if we were to estimate the cost to us of defraying their expenditure, but it would be a very doubtful matter indeed, as a question of mere pressure on our resources, whether we would sooner pay 111,000,000/. taxation in a currency depreciated as much as the United States' cur- rency is depreciated, or the same sum in an undepreciated cur- rency. The various burdens caused by the depreciation are probably a heavier tax on the national energy than the pay- ment of so much more actual money in taxation. Thus, fixed incomes, for instance, are usually really reduced to the paper standard, while they have to pay much increased prices, and even in trade, where prices have risen to coun- terbalance the fall in the value of the currency, the incon- venience of the disturbed relations between debtor and creditor has probably nearly balanced the new rise in prices. On the whole, then, we hold that it gives us a fairer estimate of the true financial position of America to calculate five dollars to the pound sterling in treating of the revenue and expenditure, than to calculate it at the reduced value of greenbacks in rela- tion to gold.

If we translate then, as. on the whole the most instructive method for us, in, dealing with the American finance, into the equivalent English figures at five dollars to the pound, we have the following very remarkable comparison between cer- lain branches of our English and the .American revenue

A comparison more pleasant to our feelings, though not per- haps very instructive, is given by the estimate of income-tax alone. Income-tax on incomes over 600 dollars,-120/. a year, including railway dividends, &c.,—yielded over 14,500,000/. sterling in the year ended last June, in the United States. In- comes under 1,0001. a year were taxed 5 per cent., and over that sum 10 per cent. ; that is to say, the lower incomes were taxed a shilling in the pound, the higher incomes two shillings in the pound. As we know, a shilling income-tax would with us yield now at least 16,000,0001., and of course a shilling income-tax, with a two-shilling income-tax for the rich, would yield something more, so that at first sight the comparison here seems in our favour. But the income-tax at the, South was probably quite inoperative in the year ended last June, so that we must calculate for only a population of twenty millions, instead of thirty, which would reduce the yield to 11,000,000/. ; and, moreover, the American machinery is still very new, and we know how much difference that made with us, while it seems that it should make much more over the vast spaces of such a country as America. On the other hand, the United States' Congress has put on a screw which we have never submitted to,—the publication of each man's income-tax with his name,—and this of course tends strongly towards exaggeration rather than depreciation of in- come. On the whole, the yield, for the rate imposed, seems more equal in America and England than we should have sup- posed, considering that the United States bear with ease,—with cheerfulness—with alacrity,—a general taxation which woad undoubtedly wring groans from us. What needs to be borne in mind also in comparing the comparative revenues of the two nations of tax-payers, is that, while our Customs' and Excise revenues are raised upon very few articles,—many Of the most productive being mere luxuries, like spirits,—the United States' Customs' and Excise revenue presses heavily at a hundred points in a way to hamper trade and production. Indeed, we do not doubt that under a well considered system like the English, the North would feel, even less than they do,,,a. taxation double of that which they are now paying. Their real burden may well be taken as indefinitely greater than the fruits which it yields to them.

Now, let us see what the United States are doing in the way of reducing the immense expenditure of the war. The follow- ing is a comparison of the expenditure on War and Navy in the last year of war (ended 30th. June, 1865)—the first of peace ended 30th June last—and the current year, or the second of peace

These are wonderful figures. It will be seen that the Amu expenses are already even for this year as small as our own ; and the Navy's less by 40 per cent. Of course the number of soldiers now retained in the United States' service is vastly- fewer than that of our own Army, but the cle'bris of, a great war leaves an immense cost in the payment of contracts, pen- sions, and innumerable other expenditures, and in spite of all this the United States have, with an energy truly wonderful, already reduced their expenditure very much within the limjts of our own. No doubt, by upholding the Continental unity policy they save an immense normal expenditure. If they had a rival of nearly equal power close at hand, they must keep up both an army and navy of very different dimensions; but allowing for this, the Americans have given us a lesson we ought never to forget on the expedition with which a truly popular army and navy can be constructed, and also,—in a rich country, where private energy is more lucrative than any offi- cial pay,—again contracted. They have thrown themselves into the work of selling off their military and naval stock with as much vigour of purpose as they threw into the work of constructing it, and yet they have shown no parsimony,--- scarcely, indeed, fragality,—in the work of disbanding. 'In the military expenditure of this year an item of no less than 3,000,0001. sterling is for back bounties alone. The men have been dismissed with all the appliances that art could discover to

.C111,606,000 ... £95,000,000 ... £67,812,000 35,809,000 ... 42,168,000 ... 21,276,000 61,845,000 ... 57,033,000 ... 39,088,000 remedy the injuries of mutilation and amputation. Within the last four years of the war more than 6,000 artificial limbs were supplied to soldiers with amputated legs, arms, and hands, and near 250,000 soldiers will have been before the end buried in cemeteries with decent monuments supplied to each by the care and at the expense of the country. In short, the Army and Navy have been treated as a popular army and navy were likely to be treated, with every respect and consideration that it was in the power of the nation to bestow. And in spite of this lavishness all these enormous reductions have been made. A graphic writer in the Daily News thus sums up Mr. Stanton's and Mr. Wells's feats in the way of " selling off ":—" Within little more than a year we find that upwards of 200,000 horses and mules were sold ; that no fewer than 4,400 barracks, hospitals, and other buildings were also disposed of ; that the enormous fleet of 590 ocean steamers used for the transport service were reduced to 53 ships ; that every one of the 262 vessels used in inland transport was paid off ; that the military railroads— there were 2,530 miles constructed during the war—with all the rolling stock, have been transferred to joint-stock com- panies ; and that the 15,389 miles of telegraph set up during the period of hostilities have also been put an end to or dis- posed of for the public benefit. In short, the enormous establishments required to sustain and move a million of armed men in time of war have all been reduced ; and yet of the less perishable stores sufficient has been retained to serve, if need be, for the equipment of large armies."

The reductions will not go further for a year or two more, be- cause an enormous sum is to be paid in back bounties ih the year 1867-1868, no less than 12,800,000/.,—which is some- thing like popular policy;—but if that sum were deducted, the cost of Army and Navy together in 1867-8 could only be estimated at 16,000,0001., or about the sum which we spend on our Army alone. Is it possible to over-estimate the strength of a people which can pay 111,000,0001. a year in taxation alone without difficulty, which has paid off 16,000,0001. debt in four months' time, after so exhausting an effort, and whose Secretary of Finance proposes to pay off from 10,000,000/. to 12,000,0001. a year regularly for the future ? For ourselves, we doubt if he would not be wiser if he proposed to pay off more. A great nation will pay a larger sum more ,willingly if it sees the end before it, than a smaller sum if the vista is nearly endless. But as Mr. McCulloch proposes to return as soon as possible to specie payments, and to revise the financial system in . a free-trade sense,—equalizing as far as possible the Customs' and Internal Revenue duties so as to diminish the artificial boon to home production,—we have little doubt that he will really use his resources to better, though less showy, purpose than if he were to continue the reduction of the debt on the scale on which he has begun it.